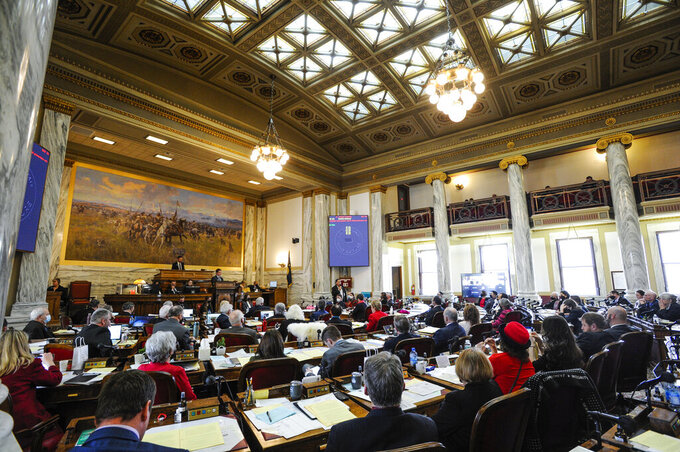 FILE - In this Jan. 25, 2021, file photo, the Montana House of Representatives holds a floor session in the State Capitol in Helena, Mont. The Montana House Judiciary Committee held a hearing Wednesday, Jan. 27, 2021, on a bill that seeks to protect free speech on public university campuses in the state, even as university administrators say their campuses already protect free speech. (Thom Bridge/Independent Record via AP, File)

Bill sponsor Rep. Mike Hopkins said that current university policy allows some groups, including conservative organizations, to be silenced on campuses, and that the measure would ensure that students are exposed to a broad range of views even if they do not agree with them.

That sentiment was echoed by several Montana university students who spoke in favor of the bill during the hearing. Some said they believed existing policies prevented them from voicing controversial viewpoints on their campuses.

“The current policies of University of Montana and other colleges around here put at risk that freedom and that right, that responsibility to develop ourselves intellectually and to grapple with things that we may not be comfortable with,” said Ethan Holmes, who graduated from the University of Montana in 2019 with a degree in Russian and political science.

Under the bill, universities could be required to pay between $2,000 and $75,000 in damages to students or groups whose free speech rights are violated.

But university administrators said their policies are already aligned with the bill contents.

“We do not regulate speech based on offensive content as long as it falls within the First Amendment guidelines of not being hate speech,” said Janelle Booth, director of government affairs at Montana State University. She said even Nazi groups would be permitted to distribute anti-Semitic literature on campus as long as they do not incite violence.

If the measure is signed into law, Montana would join at least 17 other states with similar measures protecting free speech on campuses.

The bill is a repeat of a similar measure that received broad support from the Montana Legislature in 2019, only to be vetoed by then-Gov. Steve Bullock, a Democrat, who said free speech is already covered by the Constitution.

Bullock was succeeded by Republican Gov. Greg Gianforte and the Republican-dominated Legislature is trying to push through many bills that were previously vetoed by Bullock.

The bill would prohibit so-called “free speech zones” – designated areas on campus where students and others are allowed to share views without getting approval from college officials for events that can be political in nature. Supporters of the measure said that such zones by default limit free speech in other parts of university campuses.

But University of Montana and Montana State University representatives said they did away with such zones after the bill was initially introduced in 2019, responding to criticism of the free speech zone policy that emerged during that legislative session.

Hopkins, the bill's sponsor, said that even if universities are already compliant with what the bill specifies, it should still be signed into law to ensure that future policies do not contradict free speech rights.

“What we’re looking to do with the bill is make it very much not open for interpretation,” he said. “You might say ‘we don’t have free speech zones anymore,’ – well, you had them five minutes ago."

Hopkins and others accused the University of Montana of failing to equitably protect the right of a controversial speaker to appear on campus in 2018. Sociologist Mike Adams gave a speech called “the Death of Liberal Bias in Higher Education” but the dean of the college's School of Journalism declined to sponsor it.

Some university faculty members opposed Adams’ visit to their school, writing that he had “a long record of mocking, demeaning and verbally attacking women, people of color, members of the Islamic faith and the LGBTQ community.”

Adams' appearance on the campus was widely attended.

Adams died by suicide last year after he faced backlash over comments he posted on social media, in which he compared coronavirus restrictions to living in a “slave state.”