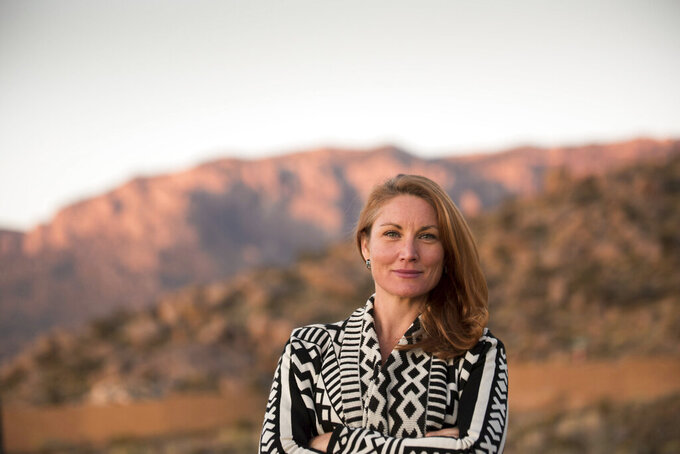 This undated photo provided by Melanie for New Mexico shows Melanie Stansbury. Stansbury's campaign points out that she co-sponsored a 2020 bill to roll back state taxes on Social Security benefits. The bill was sidelined without a House or Senate floor vote in the Democrat-led Legislature. (Melanie for New Mexico via AP)

Four candidates have their names on the ballot for the 1st Congressional District post to succeed Deb Haaland after her departure from Congress to lead the Department of the Interior. Election day is June 1 for a seat held by Democrats since 2009.

Rep. Melanie Stansbury, a Democrat, and Republican state Sen. Mark Moores are at the forefront of the contest with major party backing, pursued by a Libertarian contender and an experienced political independent. Two write-in candidates are registered.

At a combative hourlong debate, Moores emphasized his unbending support for police officers, while Stansbury highlighted her focus on families and a humanitarian approach to immigration. Libertarian nominee Chris Manning also joined in as the “rogue” option, advocating for drug decriminalization and a shift in police resources toward the homicide beat and fewer speeding tickets.

Moores said the border wall project from former President Donald Trump needs to be completed to stem drug trafficking and asylum seekers, asserting that President Joe Biden's suspension of some construction has led to inhumane conditions in southern New Mexico.

Moores also repeatedly sought to link Stansbury to the so-called BREATHE Act from the Movement for Black Lives in 2020 that would divest taxpayer spending from traditional policing and agencies such as the Drug Enforcement Agency and invest in alternative approaches to public safety.

In response, Stansbury emphasized her work in the Legislature coordinating capital spending for police and other first responders. She said investments should take on the root causes of crime through addiction services and better public education — and that policing reforms, including a federal rollback of police immunity, are needed to fix a broken criminal justice system.

She punched back at Moores by questioning how he could accept funds for his business from federal relief packages and still oppose Biden's pending initiatives on infrastructure spending and a $1.8 trillion proposal for education and families that includes free preschool.

Moores called the line of questioning “despicable," saying he put his personal safety on the line to help his company conduct COVID-19 testing during the pandemic. He is co-owner of a diagnostic testing laboratory that received about $1.8 million in federal payroll-support loans that may not have to be repaid.

Stansbury is a public policy consultant for environmental and philanthropic groups who invokes her Albuquerque upbringing within a low-income family. She ousted an incumbent Republican from the Statehouse in 2018 amid a wave of successful campaigns by progressive New Mexico female legislative candidates.

Moores, a third-term state Senator and former football lineman for the University of New Mexico, has been a vocal critic of the state's aggressive pandemic restrictions. On Tuesday, he highlighted Latino family ties dating back to the region’s Spanish colonial period.

Republican Party leaders have said they sense a rare opportunity to flip the district in a possible low-turnout balloting — and erode the Democratic Party's 218-212 majority in Congress.

But Democrats account for a dominant 47% of registered voters, versus 28% for Republicans, in the district that encompasses the Albuquerque metro area, rural Torrance County and outlying areas that overlap Indigenous communities including Sandia Pueblo. In and around Albuquerque, President Trump won just 37% of the vote in 2020.

Moores avoided a direct answer when asked by moderators who won the 2020 presidential election. “Obviously, Joe Biden is current president of the United States and hopefully we can change that in a couple more years,” Moores said.

In the state Legislature, Stansbury and Moores have offered starkly contrasting views.

Stansbury this year supported and Moores voted against Democrat-backed reforms to legalize recreational marijuana and medical aid in dying, to overturn the state's dormant ban on most abortion procedures and to strip police agencies of immunity from prosecution in state court for civil rights violations by officers.

Moores has staked his campaign on advocacy for continued oil permitting on federal land as a crucial source of employment in New Mexico. Stansbury has highlighted her advocacy for modernizing the electrical grid to address climate change and create jobs.

“We have to elect someone with a vision, someone that will work with President Biden and across the aisle," Stansbury said.

Moores was previously employed by former Republican U.S. Rep. Steve Schiff and Stansbury worked in Washington for the White House Office of Management and Budget under President Barack Obama and for the U.S. Senate Committee on Energy and Natural Resources.

Laura Olivas and Robert Ornelas have been certified as write-in candidates. Tuesday's televised debate on KOB 4 includes only the three party-nominated candidates.