Canes' season paused, while Caps play on without 4 regulars 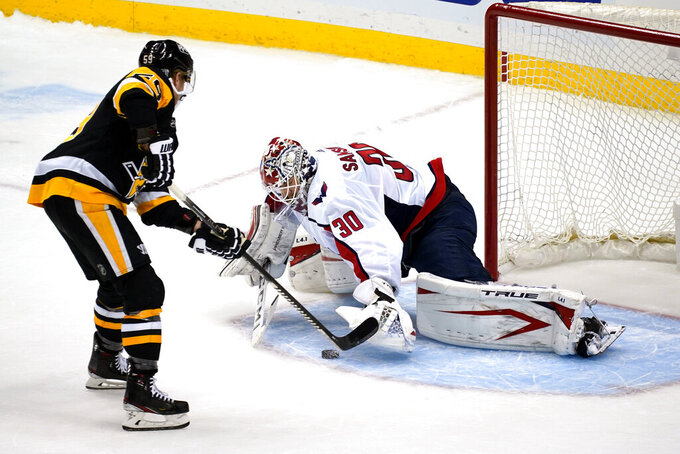 Rod Brind'Amour lamented Carolina's season coming to a screeching halt despite doing “a great job” adhering to pandemic protocols. For Peter Laviolette, his Washington Capitals will keep playing for the next week without four prominent players who broke the rules.

Each team is getting punished in a different way after being affected by the virus. The Hurricanes had games postponed through at least Saturday and won't get to practice in person with a handful of players on the COVID-19 list.

There's no indication the Capitals are being shut down, though they will have to play the next four games without captain Alex Ovechkin, No. 1 center Evgeny Kuznetsov, top-four defenseman Dmitry Orlov and starting goaltender Ilya Samsonov.

“We totally understand why the rules are in place, and there’s no arguing with that,” said Laviolette, who's in his first season as Washington's coach. “We knew the rules. We’re not sitting here saying that we were uninformed or we weren’t aware. We need to do a better job.”

The NHL fined the Capitals $100,000 for breaking protocol by having those four players in a hotel room together with none of them wearing a mask. Laviolette said there was a positive test result, which led to contact tracing, and Washington will be forced to ice a patchwork lineup for its home opener Friday night against Buffalo.

There's no hard and fast timeframe for how long a player who tests positive or has potential exposure must be out. The NHL defers to local authorities, and the minimum four games for the Capitals players relates to the District of Columbia's quarantine regulations.

After Ovechkin expressed regret for the mistake that will cost him and his fellow Russians two games against the Sabres and two against the New York Islanders, teammates said Thursday the protocols were spelled out for them before the season.

“It’s not a situation we want to be in, but here we are,” center Nicklas Backstrom said. “We’re a tight group. Every time we’re on the road, we see a chance to really connect as a group, but obviously it’s a violation.”

Carolina has been off since Tuesday, when Teuvo Teraivanen, Jaccob Slavin, Jordan Martinook and Warren Foegele joined captain Jordan Staal on the COVID-19 unavailable list. The Hurricanes have so far had three games postponed because of their outbreak and won't play for at least a week.

“We'vw done all the protocols — we’ve tried,” Brind’Amour said. “Obviously it didn’t matter, it got into our room.”

Carolina, Dallas, Florida, Nashville and defending Stanley Cup champion Tampa Bay have all had at least one game postponed because of COVID-19 concerns. The NHL said 17 Stars players tested positive, and their first four games were rescheduled.

“We’re in a position that we have catch-up to do: catch up in the standings, catch up in games played,” said Dallas coach Rick Bowness, whose team finally plays its first game Friday at Nashville. “The other teams are playing 56 games in 118 days, I think we’re playing them in 108, so our schedule just got a lot more condensed and there’s going to be times with this schedule because of the cancellation of those games it’s going to really hurt us.”

Each team is required to carry a “taxi squad” of four to six players who travel with the team and can be called up if necessary as a way to prevent postponements. The Capitals had to dig three deep into theirs to make up for some big losses.

Because of the taxi squads, the NHL doesn't have an official number of players unavailable that would postpone a game. Commissioner Gary Bettman said before the season those decisions would be made on a case-by-case basis.

Brind'Amour and Carolina general manager Don Waddell didn't seem to question any player's judgement amid the team's pause. Some players are stuck in Nashville while the rest of the Hurricanes are home because of NHL protocols spelling out what to do when positive test results happen on the road; everyone's limited to virtual practices and meetings with the practice facility closed.

“I think we all understood there was a chance that something like this was going to happen," Brind'Amour said. “It’s not really about was it going to happen, it’s how do you deal with it. I think that’s really what we’re going to find out.”