Capitol fence will be missing when Legislature reconvenes 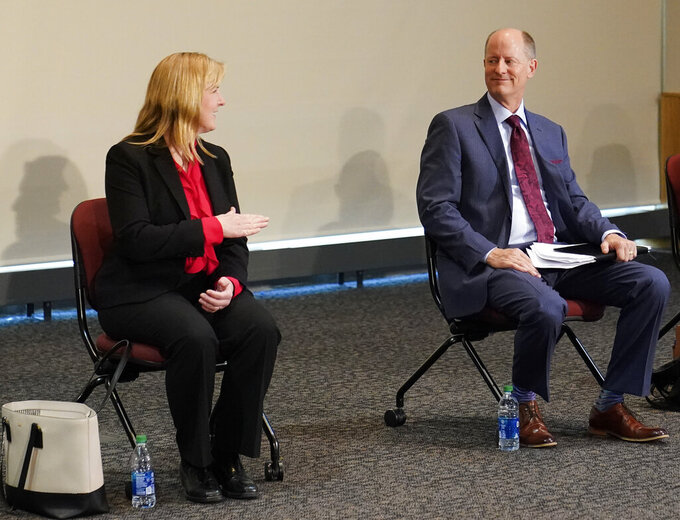 MINNEAPOLIS (AP) — Something will be missing when the Minnesota Legislature reconvenes next month to finish its work on a new budget — the fence that has surrounded the Capitol since the unrest last summer following George Floyd's death.

But officials haven’t yet decided whether the Capitol will reopen to the public in time for the special session, which Gov. Tim Walz is expected to call for June 14 or sooner.

The fence will start coming down June 1, Curt Yoakum, assistant commissioner of the Department of Administration, which runs the Capitol complex, said Tuesday. The Capitol closed in March 2020 as the COVID-19 pandemic took hold, but Walz has recently lifted virus restrictions, including the state's mask mandate.

“I think all of us want to be as transparent as possible,” Lt. Gov Peggy Flanagan, who chairs a Capitol oversight board, told reporters Tuesday. “The session feels different when there’s people not inside the building. And so we’re in conversations right now with leadership about what is possible there to make sure that Minnesotans can feel seen and heard and valued and able to participate.”

The Legislature adjourned its regular session Monday without completing its main task for the year —crafting a balanced two-year budget. Leaders said they favor transparent negotiations over the unfinished work but acknowledged thornier disputes would be addressed in private.

Besides deciding how to spend $52 billion, lawmakers also need to determine if there's enough common ground between the House Democratic and Senate Republican majorities to pass police accountability legislation. Democrats want to build on the momentum following the murder conviction of former Minneapolis police Officer Derek Chauvin in Floyd's death.

The halls and hearing rooms of the Capitol complex are typically full of citizens and lobbyists making their voices heard, but the complex was largely empty this year as lawmakers met and voted remotely.

“We will be happy to invite the public back into this building." Democratic House Speaker Melissa Hortman, of Brooklyn Park, told reporters, noting the unusually high number of lawmakers and journalists present Monday. "To have members of the public here in this building, making lots of noise while we’re doing our work, is how it is supposed to be.”

“This is the people’s house,” Gazelka told reporters.

The House included several policing measures in its public safety budget bill; the Senate never gave them a hearing. Gazelka acknowledged in his closing speech on the Senate floor that there were strong passions on both sides, but indicated that less controversial measures could make it into the final package.

“We are not going to do anything that we perceive as anti-police, but we are going to look at things that are police accountability that would make sense," Gazelka said.

The chamber’s lead negotiator on the public safety budget, Republican Sen. Warren Limmer, of Maple Grove. told reporters he expects “a lot of conversations” with his House counterpart, Democratic Rep. Carlos Mariani, of St. Paul, but warned, “there's going to be some items that we're not going to agree on.”

Limmer said he would have “a little trouble swallowing” a Democratic proposal to remove the statute of limitations on civil liability for police officers. But he said there are “quite a few” House proposals he could accept if they can work out the details. He declined to say which ones, but said they fall into the “good government” category.

Democratic Senate Minority Leader Susan Kent, of Woodbury, urged other leaders to ensure a transparent run-up to the special session. Minnesotans and the media did not have sufficient access during the regular session, but it's important that everyone has confidence in the next budget, she said in a floor speech.

"We will do that better if we actually do that in front of the people of Minnesota,” Kent said.