Carlos Dunlap hopes to be the missing piece for Seahawks 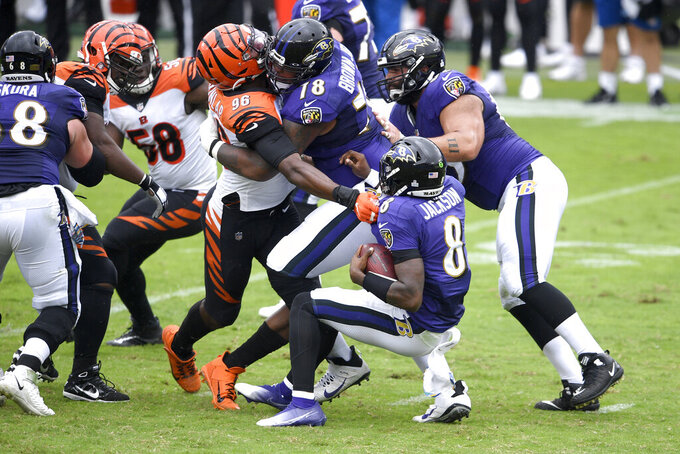 RENTON, Wash. (AP) — Carlos Dunlap looked around the Seattle Seahawks' vast indoor practice field with a grin on his face.

“This is a whole lot better than the hotel room I’ve been in the last six days,” Dunlap said. “I get a lot more space, especially here at the facility.”

Having gone through all the NFL-mandated COVID-19 protocols following his trade from Cincinnati, the Seahawks' newest defensive end finally got on the practice field on Wednesday.

It’s been a week since Dunlap was traded from the only team he’s played for in his NFL career after a contentious conclusion to his tenure in Cincinnati. Dunlap was clearly at odds with the Bengals' coaching staff and the resolution ended up being his departure after 11 seasons.

He sees Seattle as a chance to be the missing piece to a team with the best record in the NFC and legitimate Super Bowl aspirations.

“My time clearly was up. Coaches came to that conclusion and we had to do what we had to do,” Dunlap said. “That’s part of the business. Guys are dealt throughout the year. ... But for me it was an opportunity to get a fresh start, to go to a team and organization that wanted me, clearly from the move that they made. And from talking to the coaches here, they want to use me playing to my strengths. They believe I still have plenty of juice in the tank.”

The Seahawks hope Dunlap can bolster a pass rush that has been lacking all season. Seattle had three sacks last week against San Francisco but goes into this week’s game at Buffalo in the bottom third of the league with 12 sacks.

Last week’s win over the 49ers seemed to be a blueprint for what Seattle’s defense could accomplish by applying just a little bit of pressure on the quarterback. San Francisco’s Jimmy Garoppolo had limited mobility due to ankle problems, but a mix of blitzes and pressures — even when there wasn’t a sack — limited the 49ers. San Francisco had 117 total yards through three quarters and trailed by as many as 23 points before rallying late.

“The addition of Carlos also gives us a chance; we’re taking a step forward here,” Seattle coach Pete Carroll said. “I really am grateful that last week you could see that we got better. ... We’re going to try to add onto that and keep going.”

Seattle intends to use Dunlap in the LEO position on its defensive front. It’s essentially a pass-rushing defensive end, but Dunlap had not heard the term before getting in contact with Carroll and the Seahawks' coaches to learn how he’d be used.

That should fit Dunlap just fine. Seattle wanted Dunlap in part because he can line up in several different spots on the defensive line. There was also the added benefit of Dunlap being under contract through next season, a contract he restructured slightly to help out the Seahawks as they try and navigate a tight salary cap.

“I have full confidence and faith in betting on myself. And betting with the Seahawks, who else would I want to bet with? It was like a win-win situation,” Dunlap said. “At this point in my career, if I was ever to play and put on another jersey I wanted to go to an organization where I was the last piece to help them win and get a Super Bowl.”

NOTES: S Jamal Adams returned to practice on Wednesday and is on track to play Sunday after missing the last four games. ... RB Carlos Hyde (hamstring) is not expected to return this week. Chris Carson (foot) won’t be evaluated on his availability until Friday. ... Carroll said CB Shaquill Griffin was expected to be cleared from concussion protocol after being hurt two weeks ago against Arizona but was unsure if he would be available against the Bills because of a lingering hamstring injury.