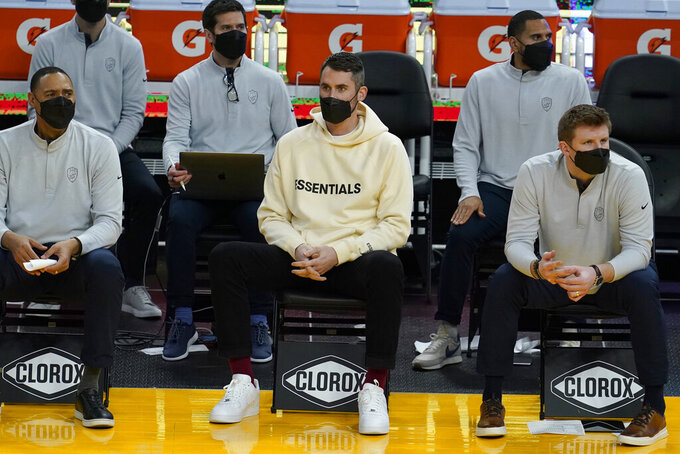 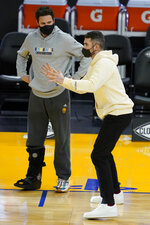 CLEVELAND (AP) — Kevin Love took part in most of the Cavaliers' practice Wednesday, moving the five-time All-Star closer to playing after missing most of the season with a calf injury.

Love has been out since Dec. 27, when he aggravated a calf strain he initially incurred in the team's exhibition opener.

Coach J.B. Bickerstaff said Love was able to do “quite a bit of the live stuff” during the workout as the Cavs, who have lost eight straight, got in a previously unscheduled practice after Wednesday's game against San Antonio was postponed because of a COVID-19 outbreak among the Spurs.

“Hopefully that’s a good sign,” Bickerstaff said of the latest step in Love's slow improvement. “Obviously you wait and see how he responds tomorrow, but he’s making progress and he was with us for most of the day.”

The Cavs host the Denver Nuggets on Friday, a matchup arranged by the NBA after the game against the Spurs was scrapped.

Love's return would provide a major boost for the Cavs, who have dropped 10 of 11 and are now enveloped in a strange situation with center Andre Drummond.

The team has decided not to play Drummond while trying to trade the two-time All-Star, who is in the final year of his contract and not part of Cleveland's long-term plans. The 27-year-old Drummond was on the bench and cheered on his teammates during Monday night's loss at Golden State.

However, Bickerstaff said Drummond was not with the team Wednesday and the Cavs are still discussing if he will stay around while trade talks proceed.

The Cavs' decision to keep Drummond off the floor drew some criticism, particularly from outspoken Warriors forward Draymond Green. Following Monday's game, Green said a double standard exists in the NBA in terms players and trades.

During his unprompted remarks, Green said players are unfairly labeled as selfish if they ask to be traded while teams can do as they please.

Bickerstaff was aware of Green's comments but avoided saying he disagreed with them.

“Nobody’s opinion should be muted,” he said. “Obviously there’s conversations that we’ve had with our guys as far as this process goes that everybody’s not privy to. But again, guys have a right to speak their voice and organizations have to do what’s best for the organization. I think that’s kind of how it works and it shouldn’t be a two-way street, so to speak.”

“He's been great,” Bickerstaff said. “He was in the locker room at halftime having conversations with the guys about what he saw on the floor. He was there after the game. He’s been tremendous through this whole thing and it’s not easy.”

The Cavs will continue to provide whatever resources Drummond needs, Bickerstaff said.

There's always a concern Drummond's awkward ordeal could have a negative impact on a young team like Cleveland's. However, Bickerstaff remains confident the Cavs are committed and can move forward without too much disruption.

“This is not an easy situation and anybody who says it is would be being dishonest,” Bickerstaff said. "It goes back to how we treat each other period as human beings and not just as pieces on a puzzle board. So we have to make sure that we’re doing the right thing by him as well.”

As the Cavs watch it all unfold, guard Collin Sexton said Drummond has the support of his teammates.

Sexton, though, would not say if Drummond was being treated fairly.

“I’m just focused on the season,” he said. "That’s still our guy. I don’t know anything that’s going on in between him and the front office. But I just know that if Andre steps on that court tomorrow with us, we’re gonna go out there and battle with him.

“And whatever happens in summer, we’re gonna go work out with him in the summer. It’s going to be that friendship, that relationship that we’re just gonna continue to build and grow. But whatever they have in the front office with him and coach that doesn’t pertain to me.”