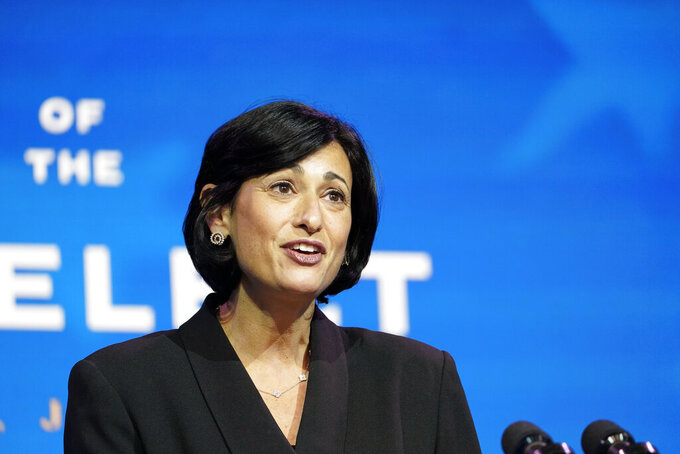 FILE - In this Dec. 8, 2020 file photo, Rochelle Walensky, speaks during an event at The Queen theater in Wilmington, Del. The U.S. is scrambling to expand DNA mapping of coronavirus samples to identify potentially deadlier mutations starting to spread around the country.(AP Photo/Susan Walsh)

ATLANTA (AP) — A new study finds that teachers may be more important drivers of COVID-19 transmission in schools than students.

The paper released Monday by the U.S. Centers for Disease Control and Prevention studies nine COVID-19 transmission clusters in elementary schools in the Atlanta suburb of Marietta in December and January, That included one cluster where 16 teachers, students and relatives of students at home were infected.

In only one of the nine clusters was a student clearly the first documented case, while a teacher was the first documented case in four clusters. In another four, the first case was unclear. Of the nine clusters, eight involved probable teacher-to-student transmission. Two clusters saw teachers infect each other during in-person meetings or lunches, with a teacher then infecting other students.

The findings line up with studies from the United Kingdom that found teacher-to-teacher was the most common type of school transmission there, and a German study that found in-school transmission rates were three times higher when the first documented case was a teacher. In some American districts, schools have had to go all-virtual because so many teachers have been exposed to the virus.

Other research has suggested that there's low transmission of viruses in schools and that they should reopen for in-person instruction, a message that President Joe Biden's administration has been pushing in recent weeks to mixed success. The 8,700-student Marietta district, like all but a handful in Georgia, has been offering in-person classes since the fall. Superintendent Grant Rivera said more than 90% of elementary students came back in person, making some classrooms relatively crowded.

All the Marietta clusters also involved “less than ideal physical distancing,” with students often less than 3 feet apart, although plastic dividers were placed on desks.

“The two main reasons for the spread of COVID-19 in these schools were inadequate physical distancing and mask adherence,” Walensky said.

In seven cases, transmission may have taken place during small-group instruction sessions where teachers were close to students. Although the authors said they observed students wearing masks, interviews found that “inadequate mask use” by students could have contributed to the spread of infection in five clusters.

The CDC again advised that schools need to pursue “multifaceted” strategies to prevent the spread of the virus, including cutting down on teacher-to-teacher meetings, making sure masks are worn correctly and increasing physical distancing, especially during mealtimes when people can’t wear masks.

Rivera said the school district reengineered instruction in elementary classrooms, making sure students and teachers spend fewer than 15 minutes at a time huddled in small groups and that children are spaced out when they gather on rugs for reading or other activities.

Rivera said the district had been using Fridays not for class time, but for teacher collaboration. Now, the district is encouraging teachers to stay separate.

“We told teachers that all teacher collaboration should occur virtually,” Rivera said.

He also said chairs had been removed from teacher workrooms, that copy machines have in some cases been moved to other places, and that teachers who plan to eat with a colleague have been told they must eat outdoors.

“To be honest, I’m really struggling with it,” he said.

Students had been kept in classes to limit movement and keep students in isolated pods, but now classes are being encouraged to eat outdoors, with some especially full classrooms going to larger spaces like cafeterias, gyms or auditoriums.

The study also said that in addition to those strategies, it might be desirable to vaccinate teachers to protect educators, cut down on in-school transmission and keep schools operating in person, although the CDC restated that teacher vaccination is "not a requirement for reopening schools.”

“School buildings can be safe for teachers and kids, but the layered mitigation and testing and tracing must be implemented to curb the risk of transmission, with vaccine availability as another layer of protection,” the teacher union chief said in a statement.