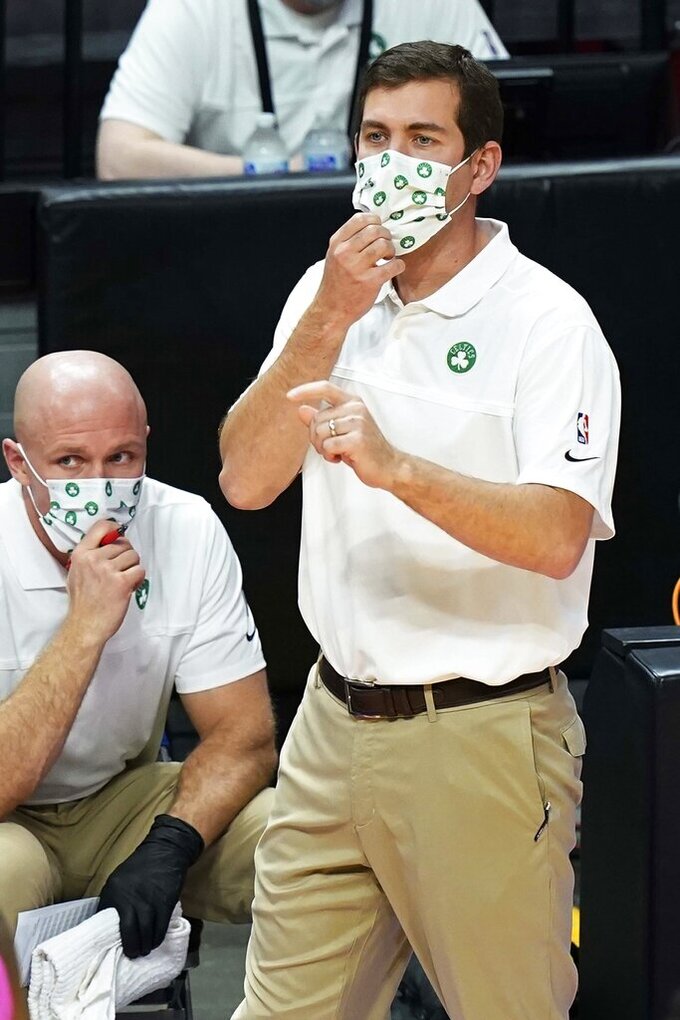 The Boston Celtics expect their unplanned weeklong hiatus because of coronavirus-related issues to end Friday, when they’re scheduled to play host to the Orlando Magic.

The Phoenix Suns, however, have a bit more time off coming.

The Celtics will be without at least three players Friday, including All-Star forward Jayson Tatum, because of the league's health and safety protocols. But four others are apparently on the cusp of satisfying their league-mandated time away from the team and are listed as questionable for Friday.

“I don't think there's an easy answer here," Celtics coach Brad Stevens said Thursday after the team's first time on the court together since a shootaround for a game Sunday against Miami that ultimately was postponed. “This is a difficult time around the country. This pandemic is as rampant as it's ever been and obviously we're feeling some of that despite the great precautions and great steps we're taking not to."

Meanwhile, the Indiana at Phoenix game scheduled for Saturday has been called off — the ninth such postponement since the week began. The Suns will not have enough players eligible to play, largely because of contact tracing issues, the NBA said. That decision means what would have been an entire three-game Suns homestand was lost, at least for now.

The earliest Phoenix will play again is Monday, when the Suns are scheduled to visit Memphis as part of the NBA's Martin Luther King Jr. Day schedule — so now it is certain that they, like the Celtics, will go at least a full week without a game.

One bit of good NBA news Thursday on the COVID front: New Orleans' Zion Williamson, who couldn't play in the Pelicans' loss to the Los Angeles Clippers on Wednesday because of an inconclusive test, has since been cleared and is eligible to play Friday against the Los Angeles Lakers.

Boston had three games that would have been played between Sunday and Wednesday postponed because some players were positive and others were ruled out because contact tracing showed that they could have been exposed to the virus.

Leaguewide, 10 games this season have now been postponed and the NBA was reviewing if more games — including a a Sunday game in Washington — would have to be pushed back. The Suns and Wizards were both scheduled to play Friday; those games were postponed because of contact-tracing issues.

“If you look at how our league is going, what's happening in our country, I don't think you can be surprised by anything," Magic coach Steve Clifford said.

More tests are likely coming to the NBA, which revealed Wednesday that 16 players tested positive for COVID-19 in the past week.

League officials, in a memo obtained by The Associated Press, have told teams that they are deciding whether to have additional game-day testing for players and referees. Teams in all 28 NBA cities have been told to investigate if there is a local lab that can process PCR tests relatively quickly; the extra tests would be conducted on game-day mornings and turn in results no later than one hour before tip-off.

The league regimen already includes daily PCR tests for players and coaches, and rapid tests on game days. The NBA told teams it was possible that a decision could be made on the extra layer of testing by the weekend. ESPN first reported the contents of the league's memo.

Boston’s weeklong hiatus, if it ends Friday as planned, would be the longest in the NBA so far this season. All five games on Thursday’s slate went on as scheduled, so five teams — Portland, Philadelphia, Charlotte, Denver and Indiana — have now played four games since the Celtics last played one.