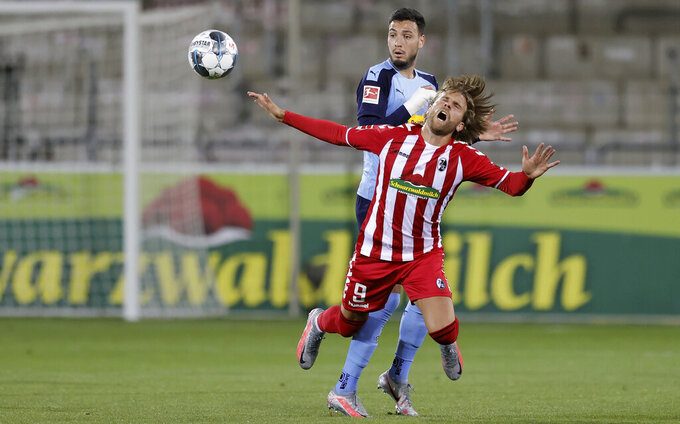 FREIBURG, Germany (AP) — Borussia Mönchengladbach’s Champions League qualification hopes were hit by losing at Freiburg 1-0 in the Bundesliga on Friday.

Nils Petersen scored with a header to a free kick in the 59th minute, just after coming on as a substitute, to change the course of the game after Gladbach had dominated.

Only Freiburg team officials could celebrate -– the game was played amid strict hygiene measures against the new coronavirus and fans have been banned from all Bundesliga games through the end of the season.

It got worse for the visitors 10 minutes after Petersen’s goal when French striker Alassane Plea was sent off because of his second yellow card for a bad challenge. Gladbach sporting director Max Eberl was also sent off for his reaction. He continued complaining through his face mask as he left the coaching area.

The trend continued in the second half until Petersen made the breakthrough. Then it was all Freiburg, which consolidated eighth place.

Gladbach missed the chance to go to third ahead of the rest of the 30th round, and could be overtaken in fourth on Saturday if Bayer Leverkusen claims a point at home to Bayern Munich.

The top four in Germany qualify for the Champions League.