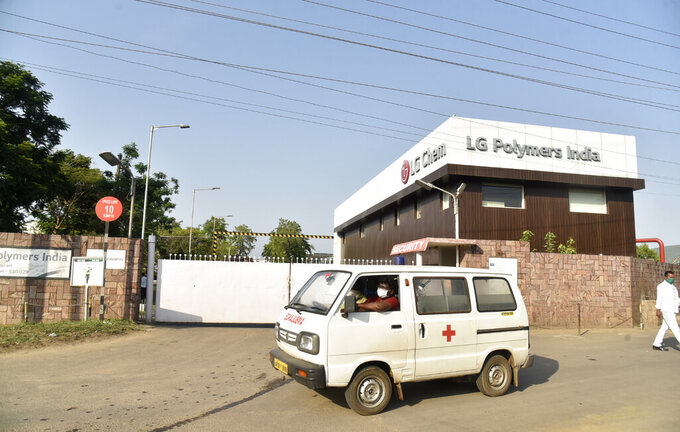 An ambulance drives past the LG Polymers plant from where chemical gas leaked in Vishakhapatnam, India, Thursday, May 7, 2020. Synthetic chemical styrene leaked from the industrial plant in southern India early Thursday, leaving people struggling to breathe and collapsing in the streets as they tried to flee. Administrator Vinay Chand said several people fainted on the road and were rushed to a hospital. (AP Photo)

HYDERABAD, India (AP) — A gas leaked from an LG chemical plant in southern India early Thursday, leaving people struggling to breathe and collapsing in the streets as they tried to flee. At least 11 people died and about 1,000 suffered breathing difficulties and other problems.

The synthetic chemical styrene leaked from the LG Polymers plant in a city on India's eastern coast while workers were preparing to restart the facility after a coronavirus lockdown was eased, state official Vinay Chand said.

Chand said some people collapsed on the road and were rushed to a hospital. About 1,000 people in an area of 3 kilometres (1.8 miles) complained of breathing difficulties and a burning sensation in their eyes, he said.

About 100 people were hospitalized and in non-life-threatening condition, Police Commissioner R.K. Meena said.

The dead included an 8-year-old girl. Meena said one person died after falling into a well while running away and another person died after jumping from the second story of his house to escape. The others died in a hospital.

State Industries Minister Mekapati Goutham Reddy said rescuers broke open the doors of village homes which were locked from the inside and found some people who had collapsed and transported them to a hospital.

South Korean company LG Chem Ltd. operates the plant in Vishakhapatnam in Andhra Pradesh state. It says it is South Korea’s largest chemical company and is part of the LG Corp. conglomerate.

The company said it is cooperating with Indian authorities to help residents and employees.

“The gas leakage is now under control, but the leaked gas can cause nausea and dizziness, so we are investing every effort to ensure proper treatment is provided swiftly,” LG Chem said in a statement.

It is looking into the cause of the leak of styrene monomer gas, which is used to produce plastic, but won't know exactly until Indian authorities complete their investigation, company official Song Chun-seob said.

The Vishakhapatnam plant is a leading manufacturer of polystyrene plastic in India. It employs around 300 workers, but Song said the victims appeared mostly to be local residents.

Mekapati Goutham Sawang, the state director-general of police, said styrene gas “is not a poisonous or a lethal gas.”

"Only if one inhales high doses of it, it is serious. Otherwise, it leads to irritation, losing coherence and breathlessness,” he said.

Authorities deployed 25 ambulances to move the victims to hospitals and others away from the accident site.

Meena said about 3,000 people were evacuated from a village near the plant.

Images from television showed people lying in the streets after they collapsed while trying to flee.

A witness said there was panic as a mist-like gas enveloped the area. “People felt breathless in their homes and tried to run away. Darkness added to the confusion,” he told a television channel. His name wan’t given by the channel.

India imposed a strict nationwide lockdown on March 25 to control the spread of the coronavirus. Measures were eased on Monday, allowing neighborhood shops and factories to resume activities.

In a major industrial disaster in India in 1984, at least 2,850 people were killed and 20,000 injured when methyl isocyanate gas leaked from a tank at Union Carbide India Ltd.’s Bhopal plant in central India.