Chief who knelt with protesters retires in new NYPD shake-up 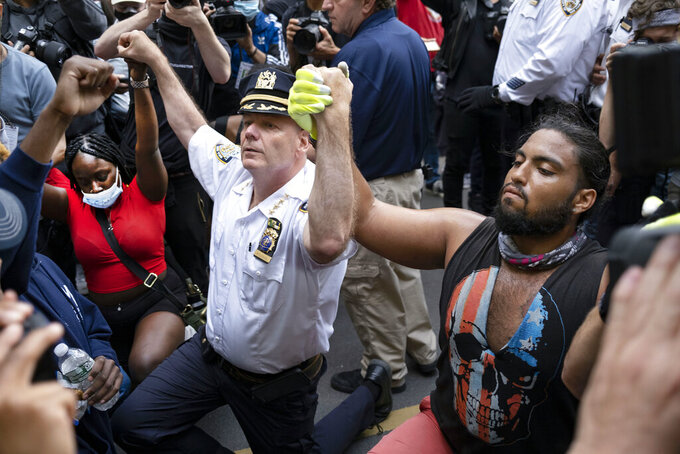 FILE — In this June 1, 202 file photo, Chief of Department of the New York City Police, Terence Monahan, kneels with activists as protesters paused while walking in New York. Monahan, who made headlines last year for kneeling with protesters while also being criticized for officers' forceful response, said Thursday, Feb. 25, 2021, that he is retiring after nearly four decades with the department. (AP Photo/Craig Ruttle, File)

NEW YORK (AP) — A New York City police commander who kneeled with protesters outraged by the death of George Floyd, but was also an architect of the department's forceful response to the demonstrations, said Thursday that he is retiring after nearly four decades on the force.

Chief of Department Terence Monahan, the NYPD’s highest-ranking uniformed leader, will become a senior adviser to Mayor Bill de Blasio, aiding in the city’s coronavirus recovery, the mayor said at a news conference announcing the move.

Between the pandemic and the protests, Monahan said, “this was the toughest year that I've ever spent in law enforcement.”

Rodney Harrison, the chief of the NYPD's detectives squad, is replacing Monahan as chief of department. He is the third Black person to hold the position. The department has not said who will succeed him as chief of detectives.

Police Commissioner Dermot Shea, noting Harrison's varied experience over a three-decade NYPD career, said he was "an easy choice” for the job, which involves running the department’s day-to-day operations.

Thursday's announcement is the latest in a series of shake-ups at the nation’s largest police department, which recently named a new top spokesperson and saw its chief of patrol officers quit in June after a short time on the job.

In promoting Harrison, the department has hewed to de Blasio’s pledge to diversify the department’s upper ranks, positions historically occupied by white, Irish-American men. Juanita Holmes, a Black woman, succeeded the patrol chief who quit last summer, and Jeffrey Maddrey, a Black man, is the Chief of Community Affairs.

Harrison has been a detective, went undercover investigating drug crimes and received the Police Combat Cross for valor in the line of duty. He also had the distinction of being the official in charge of monitoring wind speeds to decide if the big balloons were allowed to fly at the Macy’s Thanksgiving Day Parade.

“I'm flattered, but I also want to make sure this is somewhat clear: I'm also qualified for the position,” Harrison said. “I've worked in every single borough. I know this city like the back of my hand. I've worked in five different bureaus. I've been in the trenches.”

Monahan started as a patrol officer in the Bronx in 1982 at age 20 and was named chief of department in 2016. Prior to that, he was chief of patrol. He turns 60 in a few weeks.

Monahan has been a public face of the NYPD, particularly when it came to its policing of large demonstrations. He was also a key driver of the department’s community policing strategy, which calls for officers to get out of their patrol vehicles and make connections with people in the neighborhoods they protect.

As a deputy chief in 2004, Monahan oversaw the NYPD’s response to large protests at the Republican National Convention, which led to more than 1,800 arrests. Critics accused police of acting aggressively, and the city later settled a lawsuit with protesters for $18 million.

In the wake of protests in the city last spring over Floyd's killing in Minnesota, the department was criticized again for its handling of street demonstrations. Attempts by officers to halt or redirect marching crowds fueled confrontations in which officers shoved demonstrators to the ground, hit them with batons, or drove vehicles dangerously near large crowds. During the demonstrations, protesters tossed bottles and set police vehicles on fire.

Yet, Monahan also made headlines for dropping to his knees during a June 1 protest in Manhattan while clasping hands with two protesters in a gesture of solidarity.

Monahan is a defendant in lawsuits stemming from the Floyd protests — one brought by state Attorney General Letitia James and the other by the New York Civil Liberties Union and the Legal Aid Society.

Last March, as the coronavirus virus pandemic was starting to hit the city, Monahan sparred with then-health commissioner Dr. Oxiris Barbot over securing face masks for officers. In July, he was injured in the hand during a scuffle between pro-police and anti-police protesters on the Brooklyn Bridge.

De Blasio said Thursday that Monahan will still appear before the city’s police watchdog agency, the Civilian Complaint Review Board, next week regarding complaints about the police response to the protests. If Monahan is found to have violated department policy, he'd be shielded from any potential sanctions because he's now retired.

Asked if that sent the wrong message, de Blasio said: “I think the message this sends is that we're moving the recovery forward and that the city needs to move forward.”