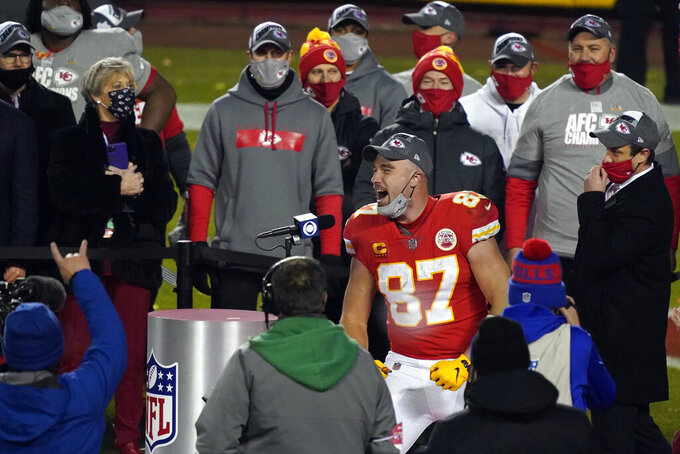 KANSAS CITY, Mo. (AP) — The Kansas City Chiefs had a pretty good idea what kind of COVID-19 protocols they would have to wade through in defense of their Super Bowl championship the moment they finally gathered for in-person training camp.

One of their own helped to devise them.

It was Chiefs vice president of sports medicine and performance Rick Burkholder who worked hand in hand with the NFL, physicians and other trainers in developing the testing, social distancing and tracing parameters that would ultimately allow the league to play its full 256-game regular-season schedule. And it was Burkholder who helped the Chiefs navigate the season with few positive tests and just one postponement — the fault of the other team — as they closed in on a Super Bowl repeat.

“I think in the spring and early summer, many of us had a lot of uncertainty about how this was going to unfold,” Chiefs chairman Clark Hunt said. “I don't think we knew for sure you could play football safely, that the virus would not be passed on the football field. Those were things we just didn't know, and it was a process to figure out how to do this.”

Ultimately, the Chiefs and Buccaneers are in the Super Bowl in part because they figured it out as well as anybody.

They adhered to strict mask mandates inside the facility. They avoided large gatherings once they left. They spread out to eat meals, held meetings in small groups and paid whatever it took for cutting-edge tracking systems.

They held the health of the guy next to them in the same regard as their own.

“We had to take care of each other. We couldn't go out there and do things we normally do,” Chiefs wide receiver Mecole Hardman said. “We did a real good job of protecting each other, and it did bring us together. We all had to be locked in.”

According to the NFL, there were 922,220 tests administered from Aug. 1 to the end of the regular season, resulting in 256 positive tests among players and 432 among other staff members. But many of those positive tests could be traced to a few teams and a handful of outbreaks, which all but crippled some of them for large parts of the season.

The Titans had an outbreak involving 24 players and personnel that caused two postponements and wiped out their bye week. The Ravens had issues heading into a Thanksgiving showdown with Pittsburgh that they ultimately played without quarterback Lamar Jackson in the following week. The Broncos had to play a game without any quarterback whatsoever, and general manager John Elway and CEO Joe Ellis also were affected by an outbreak that sent an assistant coach to the hospital.

All of which make the problems of the Chiefs and Bucs seem downright trivial.

Kansas City had eight players on the active roster land on the COVID-19 list, including Hardman and starting linebacker Anthony Hitchens, both of whom missed games. They also had a couple of staff members test positive, including strength coach Rick Rubin and Burkholder, the very same man who worked with the NFL to develop testing protocols.

Tampa Bay had 11 players on the active roster land on the list, including running back Ronald Jones and linebacker Devin White, who missed the Buccaneers’ regular-season finale and wild-card win over Washington.

But compared to other teams around the league, the Chiefs and Bucs had modest problems. Four of the Chiefs and four of the Bucs who landed on the COVID-19 list didn’t miss a game, and both teams are — knock on wood — expected to be at full strength when they meet in the Super Bowl on Feb. 7 in Tampa, Florida.

“I think our guys have done a great, great job of being accountable to each other with COVID all year, and will continue to do that,” Buccaneers coach Bruce Arians said. “We’ve talked about family and friends testing before they ever enter your home; making sure everybody’s tested and being very, very smart about it.”

Arians and his Chiefs counterpart, Andy Reid, point to a few reasons their teams have remained safe this season, one of the biggest being luck. The fact is even the biggest hypochondriac could catch the virus without even knowing it.

The other main reason is leadership. It's easy to follow the example of Tom Brady, with six Super Bowl rings behind him and the Hall of Fame in front of him, when he demands the Buccaneers mask up. The same with Patrick Mahomes, the reigning Super Bowl MVP, when he tells the Chiefs to skip the family gatherings around the holidays.

“Like, getting a haircut before the game — I had to get my barber tested, or go to the barber shop when no one is there,” Mahomes said. "You can't risk getting COVID or anything like that. And then, after games when I would usually hang out with the guys, hang out with different people, or even hang out with my family, I had to kind of prevent that as much as possible or keep it very minimal. I mean, it does take a toll on you.”

Then again, the toll is a little easier to bear when you are part of a team capable of winning a championship.