Chiefs' Niang finally gets rookie minicamp after opting out 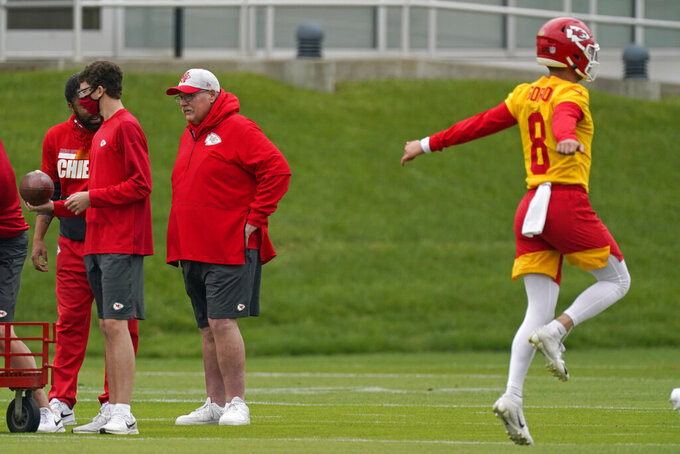 KANSAS CITY, Mo. (AP) — Lucas Niang doesn't regret his decision to opt out of his rookie season with the Kansas City Chiefs because of the COVID-19 pandemic, even if it means the offensive lineman now faces an uphill fight for playing time this season.

“I was thinking long-term,” he explained, “and that's what I decided.”

Now, more than a year after Niang was drafted in the third round out of TCU, the Chiefs are getting a chance to see him on the field. Niang took part in their three-day rookie minicamp over the weekend, giving him a chance to shake off any of the rust accumulated during his time away while giving the Chiefs an idea of how he might fit into the lineup.

“He actually came in better shape than he came in last year,” coach Andy Reid said, “so that's a plus. He's been doing stuff, so he came in and looked like he got right back into it. For what we asked him to do, he was fine.”

He might need to be a lot better than fine to see the field this season.

The way things worked out last season, Niang would have played some crucial snaps for the AFC champions — and even may have started in the Super Bowl. Injuries and the decision of fellow offensive lineman Laurent Duvernay-Tardif to opt out left them perilously thin on depth, and the only starter against the Tampa Bay Buccaneers in the Super Bowl that handled his job during the regular season was center Austin Reiter.

The makeshift offensive line was predictably dominated by Tampa Bay in a humiliating defeat.

Chiefs general manager Brett Veach, perhaps scarred by the sight that February night, wasted little time scrapping their entire offensive line and rebuilding it from the ground up. They signed Patriots stalwart Joe Thuney to play left guard, lured former All-Pro lineman Kyle Long out of retirement to play guard or tackle, signed Rams center Austin Blythe and then made a draft-week splash by sending their first-round choice in a package of picks to land Baltimore tackle Orlando Brown Jr.

The Chiefs weren't done, either. They landed one of the draft's top centers in the second round in Oklahoma's Creed Humphry, then took advantage of some medical concerns that allowed Tennessee lineman Trey Smith to slide all the way to the sixth round — a potential steal if his heart condition has truly been solved.

Throw in the return of Duvernay-Tardif, who spent last season helping COVID-19 patients in his native Canada, and the offensive line room that Niang walked into this weekend looked a whole lot different from last season.

“You can tell he's worked,” Reid said. “The thing with this is there was no offense vs. defense with the lines. We didn't have the one-on-ones or anything like that. So like all players, it's going to be a challenge down the road to get back into that, but for right now, he looked tremendous for what we were doing.”

The year off allowed Niang to further recover from a hip injury that he suffered at TCU in 2019, though he probably would have been healthy enough to play last season. It also allowed him to work out with BX Movement’s Brett Yarris in his hometown of New Canaan, Connecticut, where the longtime guard spent time working at tackle.

Given so many candidates for so few jobs, that flexibility could help Niang stand out from the offensive line crowd.

“He’s a very intelligent kid,” said Reid, a longtime offensive line coach. “I think you guys know that, but he’s very intelligent. Just getting him back into the swing of things, it looked like he did that well.”

It's not as though the Chiefs hadn't been keeping tabs on Niang, either. Their coaching staff reached out on a weekly basis to make sure he was staying in shape, and even his teammates kept in touch by text message and social media.

“We were literally in the training room the other day and out of nowhere ... (Patrick Mahomes) bumps me and says, ‘Hey, how’s Niang doing?’" Veach said earlier this offseason. “We’re anxious to get him back."

Well, he's finally back. And the Chiefs are counting on Niang to be better than ever.