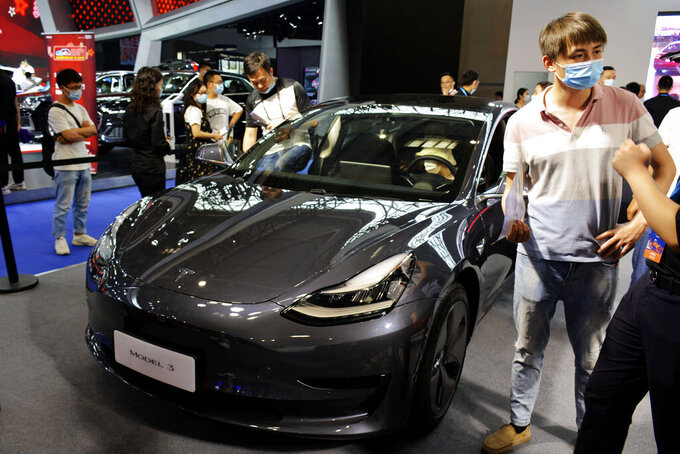 Visitors wearing face masks to protect against the new coronavirus look at a Tesla Model 3 vehicle on display at an auto show in southwestern China's Chongqing Municipality, June 13, 2020. An industry group reports on Friday, July 10, 2020, China's auto sales rose 1.8% in June over a year earlier but were down by double digits for the first half of 2020 after the country shut down to fight the coronavirus. (Chinatopix via AP)

BEIJING (AP) — China’s auto sales rose 1.8% in June over a year earlier but fell by double digits for the first half of 2020 after the country shut down to fight the coronavirus, an industry group reported Friday.

June sales of SUVs, sedans and minivans in the industry’s biggest global market rose to 1.8 million, according to the China Association of Automobile Manufacturers.

That was down from May’s 7% gain following the reopening of the economy but a rebound from February’s record 81.7% plunge after dealerships and other businesses were shut to contain the virus outbreak.

For the six months through June, sales were off 22.4% from a year ago, CAAM reported.

Total vehicle sales, including trucks and buses, rose 11.6% in June to 2.3 million.

Demand already was weak before the outbreak due to consumer jitters over a slowing economy and trade tension with Washington. Sales fell 9.6% last year, the second straight annual decline.

That has hurt global automakers that are looking to China to propel sales growth.

It also squeezes cash flow at a time when global and Chinese brands are spending billions of dollars to develop electric vehicles under pressure to meet government sales quotas.

Demand for electric vehicles weakened last year after Beijing reduced subsidies that helped to make China their biggest market, accounting for half of global sales. The government said in April it will extend subsidies through 2020 to shore up sales.

Also in the first half, SUV sales declined 14.9% from a year ago while sedan sales were off 26%.