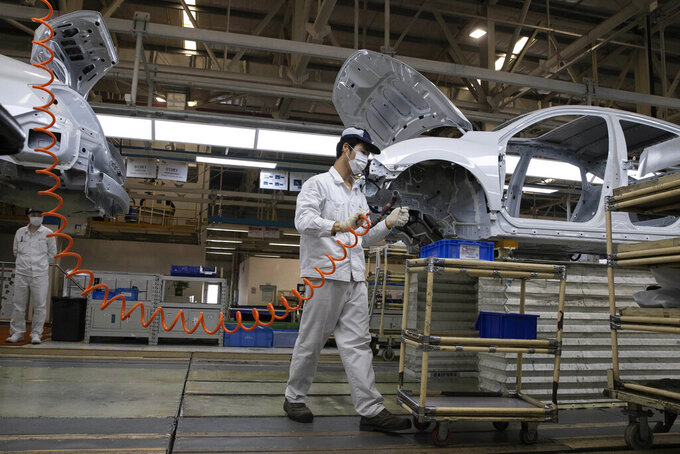 FILE - In this April 8, 2020, file photo, workers assemble cars at the Dongfeng Honda Automobile Co., Ltd factory in Wuhan in central China's Hubei province. China's auto sales sank 48.4% in March from a year ago as the economy reeled from the coronavirus, according to an industry group, adding to strains for the struggling industry in its biggest global market. (AP Photo/Ng Han Guan, File)

BEIJING (AP) — China’s auto sales sank 48.4% in March from a year ago as the economy reeled from the coronavirus, according to an industry group, adding to strains for the struggling industry in its biggest global market.

The decline was an improvement over February’s record-setting 81.7% sales plunge after auto dealerships and other businesses were shut down to fight the try to stop the virus’s spread.

The ruling Communist Party started reopening factories, restaurants and stores in March after declaring victory over the outbreak. But consumers who are uneasy about potential job losses or a resurgence of the virus are reluctant to make big purchases.

“On the consumer side, since the epidemic has not completely ended, some market demand is still being suppressed,” the CAAM said in a statement Friday.

The downturn is a blow to global automakers that are counting on China to drive revenue growth amid weak demand in the United States and Europe.

Forecasters say it will be weeks or months before production returns to normal. Automakers say the pace depends on how fast suppliers can resume delivering components.

The downturn is squeezing global and Chinese brands that are investing billions of dollars to develop electric vehicles under pressure to meet government sales targets.

Sales of electric and gasoline-electric hybrid SUVs and sedans fell 53.2% from a year earlier in March to 53,000, according to CAAM. That was an improvement over February’s 75.2% decline.

EV sales for the first three months of the year were off 56.4% at 114,000. China is the biggest market for electrics, accounting for about half of last year’s global sales.

EV demand sank in mid-2019 when Beijing ended multibillion-dollar subsidies to producers and buyers and shifted the burden to the industry by requiring automakers to make a portion of their sales electric.