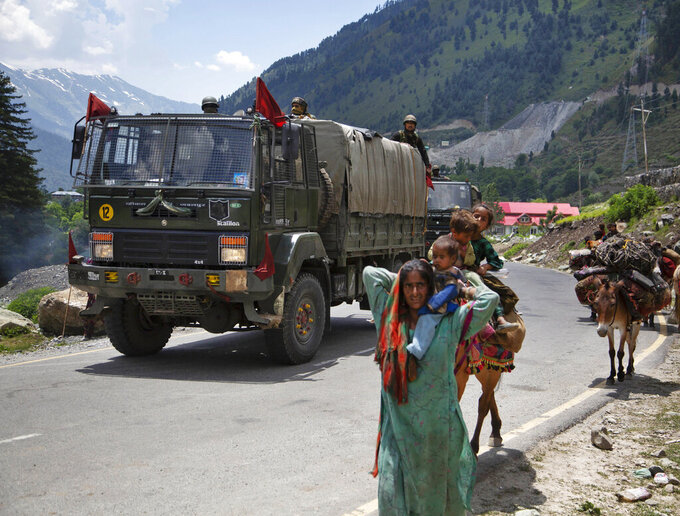 Kashmiri Bakarwal nomads walk as an Indian army convoy moves on the Srinagar- Ladakh highway at Gagangeer, north-east of Srinagar, India, Wednesday, June 17, 2020. Indian security forces said neither side fired any shots in the clash in the Ladakh region late Monday that was the first deadly confrontation on the disputed border between India and China since 1975. China said Wednesday that it is seeking a peaceful resolution to its Himalayan border dispute with India following the death of 20 Indian soldiers in the most violent confrontation in decades. (AP Photo/Mukhtar Khan)

BEIJING (AP) — China and India accused each other Wednesday of instigating deadly border clashes between their forces along the disputed Himalayan frontier, pledging to safeguard their territory but also to try to end a standoff that has dramatically raised the stakes between the nuclear-armed Asian giants.

Twenty Indian troops were reportedly killed in the clashes Monday night in the Ladakh region’s Galwan Valley, while it was not clear whether China suffered any casualties.

Indian security forces said neither side fired any shots, with some officials saying the soldiers were carrying anti-riot gear rather than weapons. The Indian soldiers, including a colonel, died of severe injuries suffered in sub-zero temperatures after the two sides threw rocks and traded blows, Indian officials said.

It was the deadliest conflict between the sides in 45 years, and escalated a standoff in the disputed region that began in early May, when Indian officials said Chinese soldiers crossed the boundary at three different points, erecting tents and guard posts and ignoring verbal warnings to leave. That triggered shouting matches, stone-throwing and fistfights, much of it replayed on television news channels and social media.

Chinese Foreign Minister Wang Yi warned New Delhi not to underestimate Beijing's determination to safeguard what it considers its sovereign territory. His comments came in a phone call Wednesday with his Indian counterpart, Subrahmanyam Jaishankar.

“The Indian side would best not make an incorrect judgement of the situation, would best not underestimate China’s strong determination to safety its sovereign territory,” Wang said in a statement issued by the foreign ministry.

He repeated China’s claims that India was solely responsible for the conflict, saying Indian forces had crossed the Line of Actual Control that divides the thousands of troops from both sides deployed in the area.

He added that the incident would have “serious repercussions” on India's relationship with China, but that both sides were committed to further disengaging on the remote plateau of the Himalayan terrain.

“Their sacrifices won't go to waste," he said. “For us, the unity and sovereignty of the country is the most important thing. India wants peace, but when provoked, it is capable of giving a fitting reply, be it any kind of situation.”

A group of protesters gathered Wednesday near the Chinese Embassy in New Delhi, India's capital, condemning the killing of the soldiers and demanding a ban on Chinese goods. They carried placards with crossed-out photographs of Chinese President Xi Jinping and the Chinese army.

A small group of retired Indian army personnel also marched close to the embassy with placards reading “Chinese army down down.” They were detained by police.

While experts said the two nations were unlikely to head to war, they also believe easing tensions quickly will be difficult.

“This will likely be a watershed moment in India-China relations and the geopolitics of the Indo-Pacific,” said Abraham Denmark, Asia program director at The Wilson Center. “Both countries are led by men who have embraced nationalism, and both countries are facing tremendous domestic and international upheaval as a result of COVID-19 and other long-standing problems.”

The main questions now are if either side can find a path to deescalation and whether India’s allies such as the United States will help.

“It is a highly volatile and dangerous situation between two nationalistic, nuclear powers at a time when American influence has badly diminished,” Denmark said.

An editorial published Wednesday in the Global Times, a Chinese Communist Party newspaper, said India was being encouraged by the U.S., which has been steadily building relations with India’s military.

“The arrogance and recklessness of the Indian side is the main reason for the consistent tensions along China-India borders,” the editorial said, adding that China “does not and will not create conflicts, but it fears no conflicts either.”

India unilaterally declared Ladakh a federal territory while separating it from disputed Kashmir in August 2019. China was among the handful of countries to strongly condemn the move, raising it at international forums including the U.N. Security Council.

Thousands of soldiers on both sides have faced off over a month along a remote stretch of the 3,380-kilometer (2,100-mile) Line of Actual Control, the border established following a war between India and China in 1962 that resulted in an uneasy truce.

The United Nations urged both sides “to exercise maximum restraint.”

“We are concerned about reports of violence and deaths at the Line of Actual Control between India and China,” U.N. associate spokesperson Eri Kaneko said. “We take positive note of reports that the two countries have engaged to de-escalate the situation.”

This story has been corrected to show a reference to 17 injured is a description of how some fatalities occurred and not a report of more casualties.