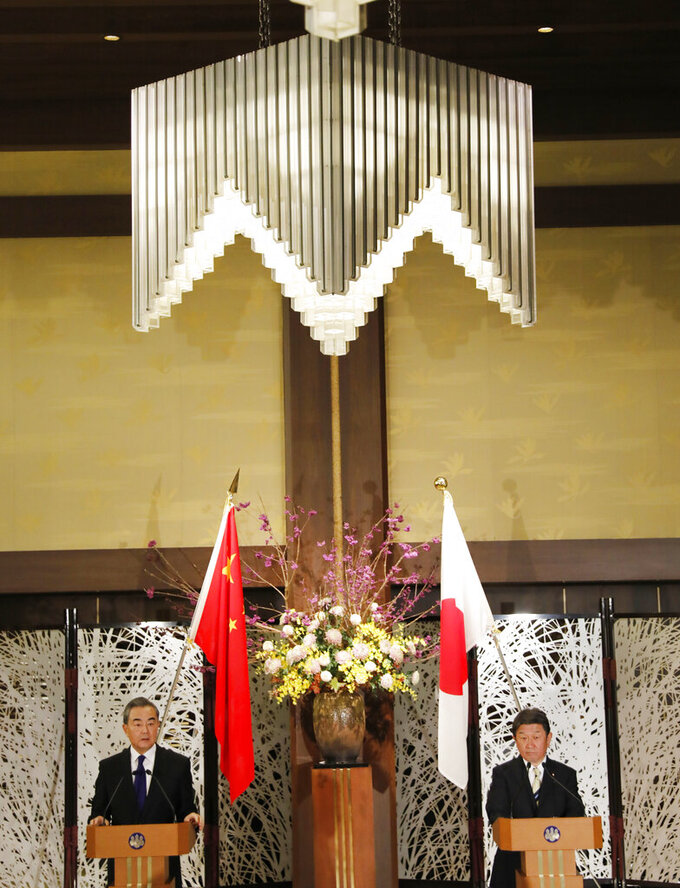 TOKYO (AP) — The foreign ministers of Japan and China agreed Tuesday to cooperate in fighting the coronavirus and reviving their pandemic-hit economies, while trying to avoid actions that provoke tensions over disputed islands in the East China Sea.

Chinese Foreign Minister Wang Yi, who arrived in Tokyo on Tuesday, and his Japanese counterpart, Toshimitsu Motegi, also agreed to resume business travel between the world’s No. 2 and No. 3 economies through a “business track” program that will allow visitors to engage in limited activities during their 14-day quarantine periods. Japan recently launched such arrangements with Singapore, South Korea and Vietnam.

The two countries are to restart business travel by the end of this month, even though Japan is currently grappling with a resurgence of coronavirus infections as the government struggles to balance disease prevention and economic health.

“I expect the agreement will contribute to energizing the economy between Japan and China and serve to promote mutual understanding,” Motegi said. He said stable Japan-China relations are crucial not only for the two countries but also for the region.

Chinese nationals topped the number of foreign visitors in Japan before the pandemic.

Relations between the two countries have been strained over territorial disputes and wartime history. But ties have improved in recent years while China’s trade dispute with the U.S. has escalated. Japan, a key U.S. ally, sees China as a crucial trading partner and faces the challenge of balancing its relations with both nations.

On Tuesday, Japan and China agreed to work together on climate change, energy conservation, healthcare and digital commerce as part of their economic cooperation. They agreed to support a rule-based multinational trade system, Wang said.

Motegi and Wang also discussed their dispute over Japanese-controlled East China Sea islands which Japan calls Senkaku and China calls Diaoyu, and agreed to try not to escalate tensions. The two sides will establish a hotline between their militaries by the end of December to “improve communication and safety,” Wang said.

“China hopes that with joint efforts from both sides, we can build the East China Sea into a sea of peace, friendship and cooperation. This serves the two people’s fundamental and long-term interests,” Wang said.

Still, they insisted on their rival territorial claims. Motegi said he reiterated Japan’s position and (asterisk)strongly urged China to take a forward-looking action." Wang defended China’s coast guard patrols in the area. “We have a clear position in this regard. We will certainly continue to safeguard our sovereignty,” he said.

Wang is to meet with Prime Minister Yoshihide Suga on Wednesday, the first meeting with a Japanese leader by a top Chinese official since the February visit of Chinese foreign policy chief Yang Jiechi.

Wang's visit comes amid growing concerns about China’s increasing influence in the region.

Australian Prime Minister Scott Morrison held talks last week with Suga and they agreed to step up their military partnership to promote peace and stability in the Indo-Pacific region as a counter to China’s rise.

Japan and Australia, along with the U.S. and India, are also trying to bring in Southeast Asian nations and others to join their cooperation. Beijing has criticized the moves.

Japan and China say they are not currently considering rescheduling Chinese President Xi Jinping’s state visit to Japan, postponed from the spring due to the pandemic. Motegi and Wang did not mention Xi's visit during their joint news conference.

After his visit to Japan, Wang will head for meetings in South Korea.

AP researcher Liu Zheng in Beijing contributed to this report.