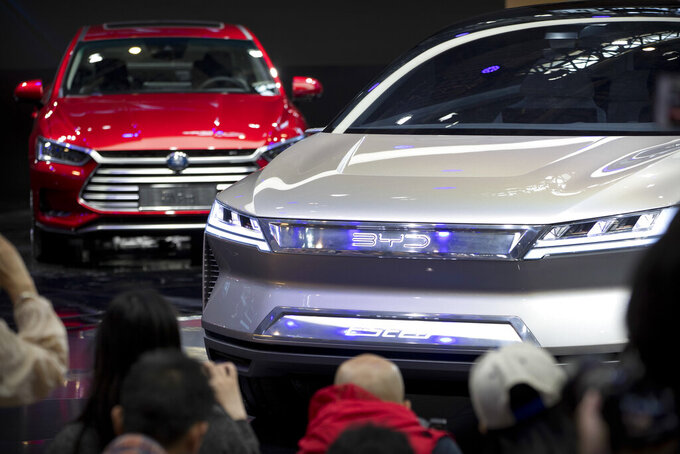 FILE - In this April 25, 2018, file photo, attendees take photos of the E-SEED electric concept car during a press conference by Chinese automaker BYD at the China Auto Show in Beijing. China is promising more subsidies to shore up plunging electric car sales amid the coronavirus pandemic but set limits that exclude Tesla’s made-in-China model. Subsidies and tax breaks that were due to end this year will be extended by two years in response to “an accumulation of unfavorable factors” including the virus, the Finance Ministry said Thursday, April 23, 2020.(AP Photo/Mark Schiefelbein, File)

Subsidies and tax breaks that were due to end this year will be extended by two years in response to “an accumulation of unfavorable factors” including the virus, the Finance Ministry said Thursday.

Beijing has spent billions of dollars subsidizing electrics in hopes of cleaning up China’s smog-choked cities and taking an early lead in a promising global industry.

That helped to turn China into the biggest market for electrics, accounting for about half of global sales. But demand sank in mid-2019 after regulators started shifting the burden to automakers by cutting subsidies and imposing minimum sales quotas.

First-quarter sales plunged more than 50% from a year earlier after China shut down most of its economy to fight the virus.

Tesla is the first wholly foreign-owned automaker venture in China after Beijing repealed rules that required global brands to work through Chinese partners.

Top-end models from some Chinese competitors are priced above 300,000 yuan but most cost less than that.

The decision had been widely expected after some cities renewed subsidies this year to support flagging sales.

The ministry gave no details of amounts to be paid per vehicle.

The Finance Ministry also said vehicles with “battery switching” technology will be exempt from the price cap. That appears to extend to NIO, a higher-priced brand backed by Chinese investors.