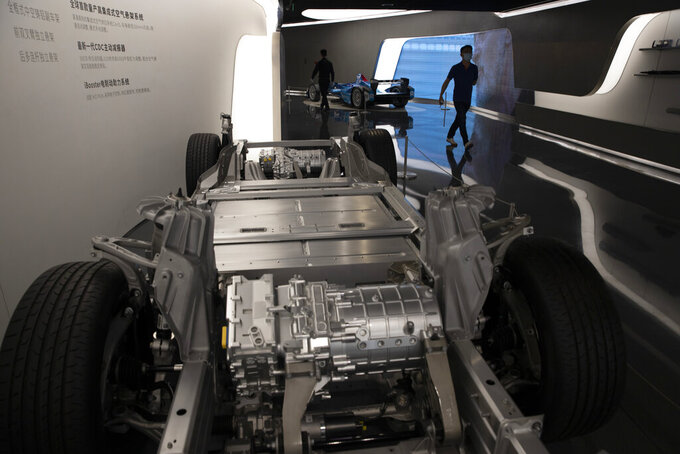 Visitors wait past a vehicle chassis displayed at the NIO flagship store in Beijing on Thursday, Aug. 20, 2020. The chairman of Chinese electric car brand NIO says it plans to start expanding to Western markets next year. William Li said the company might export a battery-swapping service already offered in China that might help it compete with rival Tesla. (AP Photo/Ng Han Guan)

BEIJING (AP) — Chinese electric car brand NIO plans to start expanding to Western markets next year and might export a battery-swapping service that could help it compete with rival Tesla, the company’s chairman said Thursday.

NIO, founded in 2014, pushed back foreign plans due to the coronavirus pandemic, William Li told reporters. He said the company is studying which market to start in and how to structure its operations.

“Hopefully, in the second half of next year, we can start some small batch exploration in countries where EVs are popular,” Li said. “We would like to start with European countries.”

NIO Inc. is the most prominent premium-priced Chinese brand in a crowded electric vehicle industry with dozens of competitors including startups, state-owned automakers and joint ventures with foreign partners.

The ruling Communist Party has promoted electrics with multibillion-dollar subsidies that have made China the biggest EV market, accounting for about half of global sales. Subsidies were due to end but have been extended through 2022 to help producers weather the pandemic.

Li said a potential competitive advantage is NIO's service that allows owners to swap drained batteries instead of recharging them. The company has set up 143 battery-swap stations in cities including Beijing and Shanghai.

Li said that if NIO decides to offer that service in Western markets, it could help the company compete with Tesla in crowded cities such as New York and Chicago where owners park in the street or cannot set up a charging point at home.

“A lot of people need this battery swap because they cannot install a charger at home,” Li said.