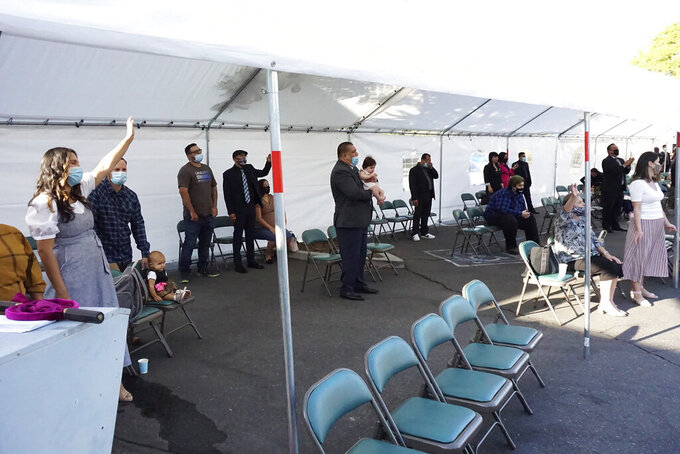 In a photo provided by Word Aflame Ministries, people are outdoors during a service at Word Aflame Tabernacle in La Habra Heights, Calif. The Pentecostal church says the city violated its constitutional rights by harassing it over the way it has held outdoor gatherings during the COVID-19 pandemic. (Word Aflame Ministries via AP)

LOS ANGELES (AP) — When other church leaders protested coronavirus shutdown orders, saying they were following the word of the Lord, pastor Joe Garcia said he followed the word of the law.

He held services online for months during coronavirus restrictions and later his Pentecostal flock socially distanced outside the Word Aflame Tabernacle when worship could resume in person. Despite that, he said he’s continuously been harassed by a Southern California city official and a church neighbor who have made false claims that he’s violated public health orders.

Garcia struck back Wednesday in a federal lawsuit against La Habra Heights, City Manager Fabiola Huerta and a man who has repeatedly complained to the city. The lawsuit says they violated the constitutional rights of the church and its leaders.

"They’re just zeroing in on us," Garcia told The Associated Press on Thursday. “They're just trying to catch us doing something wrong and we’re not. There's no case ... to build on.”

Many churches across the U.S. have gone to court to challenge public health closures during the pandemic. Those have mainly been against government officials, alleging bans on religious gatherings during shutdown orders violate their First Amendment rights to assemble.

Besides targeting the city, Garcia's lawsuit sweeps in Juan Garcia, who is not related to him, saying he reported the church to police and health officials, yelled at worshippers and shot photos and video of them. The lawsuit says Huerta supported Juan Garcia's false accusations and conspired with him to penalize the church.

The pastor said he has followed proper social distancing protocols since services were allowed to resume in late May, and no member has become ill.

The lawsuit said Huerta and Juan Garcia have prompted the Los Angeles County Department of Public Health to visit the church five times since Aug. 23. The department issued two inspection reports that found the church in compliance with social distancing and mask-wearing, the lawsuit said.

Huerta learned of the lawsuit when contacted by AP and said it “came out of left field” and she couldn’t immediately comment. The city later issued a statement that did not address specific allegations.

Huerta has been spotted hiding in the bushes and in an unmarked car taking video of gatherings, the lawsuit alleged. She called Los Angeles sheriff's deputies to report that the church was holding indoor services, but the claim was unfounded, the lawsuit said.

The city fined the church $3,000 for noise violations, the lawsuit said. It also sent a letter demanding the church cease “noncritical activities such as Bible study and prayer groups” or face a $1,000 fine or up six months in jail.

The city's statement said it had dismissed all fines for noise violations and was no longer asking the church to cease activities. The city said it had accommodated the church by offering a permit to hold outdoor services as long as it complied with noise limits in residential areas.

Joe Garcia said the church uses a decibel monitor to measure the volume and turns down music if it gets too loud during two services — in Spanish and English — on Sunday.

The pastor said Juan Garcia has never liked members of the Word Aflame Ministries, who rent the Hillcrest Congregational Church across the street from his house in a suburban neighborhood about 15 miles (24 kilometers) southeast of Los Angeles.

The pastor compared his battle with the neighbor to the biblical story of the underdog David vanquishing the giant Goliath.

“He’s Goliath breathing out threatenings against the children of Israel,” Joe Garcia said. “But we all know what happens at the end of that story ... I know it’s going to be a victory for us.”