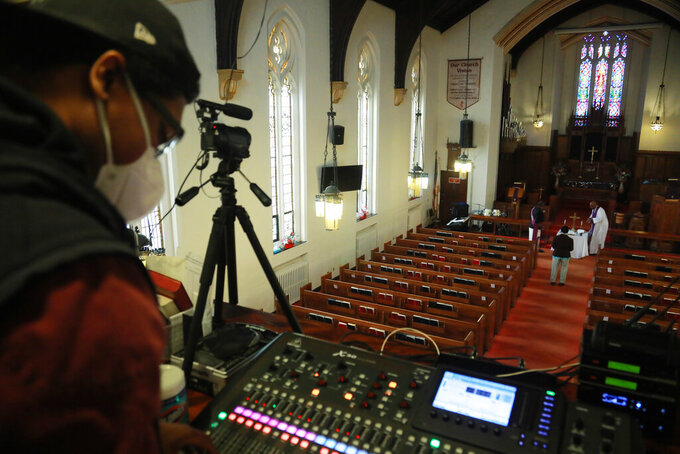 In this April 5, 2020, photo, multimedia technician Joseph Stoute prepares for a livestream online broadcast for congregants of St Paul's United Methodist Church in the Brooklyn borough of New York who are homebound due to citywide restrictions aimed at controlling the new coronavirus outbreak. As in-person worship services and religious gatherings have been shut down around much of the country, faith leaders have been left scrambling to shift all their worship services, fundraising, administrative work and community announcements to digital platforms. (AP Photo/Bebeto Matthews)

(RNS) — As in-person worship services and religious gatherings have been shut down around much of the country, faith leaders have been left scrambling to shift all their worship services, fundraising, administrative work and community announcements to digital platforms.

More than a few have been calling interfaith activist and digital media consultant Amanda Quraishi.

“I feel really validated by this, because for years I’ve been preaching about how to use these spaces productively to build communities,” said Quraishi. “So I’ve been happy to see these different ‘real world’ communities looking for ways to make the same kinds of engagements happen online.”

With Passover and Holy Week in full swing, and Vaisakhi and Ramadan just around the corner, the pressure is on religious leaders. But because so few organizations had these digital platforms established already, the past few weeks have been “a frantic, wild ad hoc experience” for religious leaders experimenting with tools and techniques, Quraishi said.

This content is written and produced by Religion News Service and distributed by The Associated Press. RNS and AP partner on some religion news content. RNS is solely responsible for this story.

But the pandemic has also left digital strategists like Quraishi dealing with an unending stream of questions and consultations, and technology companies that provide church management software fielding a staggering upswing of usage and interest.

“It’s been crazy busy for us,” said David Rogers, senior vice president of marketing at Ministry Brands. “We’ve been working straight through the weekends for the last four weeks.”

Rogers said many churches have had a crash course in learning how to use technology and then putting it to use in ministering to their communities.

Since the onset of the novel coronavirus in the U.S., that number has gone up by thousands, Rogers said. The company has had to bump up its server capacity to handle the increased volume of livestreaming.

“The urgency, the need right now that we’re seeing from the churches has brought a certain level of focus to make sure that we’re serving them in the right way,” he said.

For most synagogues, mosques and temples, Quraishi said, faith leaders are mostly using general video and conferencing tools such as Zoom, Facebook Live and YouTube Live.

The response has been more sophisticated among larger churches and Christian nonprofits, which tend to have more resources and infrastructure to convert into an online operation. As a result, she said, many have been drawn to all-in-one tools dedicated to streamlining church logistics.

A survey from the American Enterprise Institute in late March found that about 57% of Americans who are members of a church, temple, synagogue or mosque say their place of worship is offering services only online.

About a third of Americans say they have participated or watched a remote or online service, while over half of white evangelical Protestants reported doing the same.

Ministry Brands says it saw an “unprecedented surge” of users at ChurchStreaming.tv, the company’s online platform. Compared with mid-March last year, its streaming usage has quadrupled, according to the company.

The need to rapidly shift to online technology, and iron out details and workflows ahead of Easter, has left many church leaders feeling the crunch.

A survey by Exponential, an evangelical church planting organization, found that more than half of pastors holding online gatherings found creating engaging interactions to be a significant obstacle.

About 4 in 10 respondents said learning new technology was a major obstacle in making the transition.

Respondents particularly pointed to the difficulties of internet quality and their uncertainty as they searched for the best digital tools, as well as the need to teach older congregants to navigate the technology. All those challenges were particularly acute for smaller churches, the survey found.

“Churches are scared right now,” Rogers said. “A lot of them are wondering, ‘How do we make this work? We don’t know the technology.’ We’re putting a lot of time and effort into making sure that not only can we enable these churches, but also enable their congregants. How am I supposed to teach my mother-in-law to give online, you know?”

Ministry Brands has been hosting daily webinars to walk churches across the country through such challenges in response to overwhelming demand. It also has begun to rewrite all its training manuals and rerecord all its video tutorials to reflect the fact that its users would be sitting at home on their couch, not in church pews, while making donations.

While overall donations to the churches Ministry Brands serves have fallen, online giving has seen a “tremendous” spike as dropping off a check to one’s brick-and-mortar church becomes more difficult, Rogers noted. Online giving via the company’s easyTithe product was nearly double mid-March what it was during the same period in 2019.

Many companies have rolled out new features, discounts and free trials in response to the pandemic. Ministry Brands has dropped fees and extended trials for several of its products.

The company Text In Church, which told Religion News Service it has seen a bump in inquiries about its services as well as free trials, has made its services free for 60 days and added extra text messages to each user’s account for free. The company is also hosting weekly live training to discuss strategies for connecting with members in an online-only world.

“In each of your little corners of the internet, your services are being watched by more people than ever before,” Text In Church’s Ali Hofmeyer wrote on the site. “Because people are scared. And your opportunity to create connection and community with them is not gone. ... Text In Church is positioned and prepared to walk through this season with you.”

Go Church App set up a discount for churches seeking a new tool to communicate with their congregants. The startup has seen an “uptick of interest” in its platform, through which church leaders can set up mobile apps to manage online giving and send push notifications to church members’ phones, founder James Kwon said.

“We feel like our app is a powerful communication tool for churches,” Kwon said. “And like most powerful tools, if you don’t do communication well, it can cause a lot of damage.”

San Francisco-based Raklet, which offers automated messaging services via email or text, has seen leads from churches interested in its suite of church management software double, said co-founder Gercek Karakus. “(The) pandemic is causing a lot of trouble for everyone but it’s also helping people shift to digital solutions at a much higher rate,” Karakus told Religion News Service.

Boyd Pelley, co-founder of the Texas-based Churchteams, said he has seen a “huge increase” in new clients seeking its online giving solutions.

“Overall the big issues are giving and communication,” said Pelley, noting that the company released an upgrade so congregants can simply text the church’s office phone number to make donations. “Being able to combine both of those with text as well as email is a huge help to churches right now.”

A blog post by Pelley last month ponders what functions from a traditional church facility that online applications can provide.

Livestreaming, he wrote, is “obviously the worship center.” The website is the gathering space, where people enter and get a first impression of the church. Video chat is the classroom; the church’s blog is the conference room; social media is the fellowship hall; email is the information table; texting is the hallway.

“All across the country today, churches are empty because of the coronavirus pandemic,” Pelley wrote. “This is a time for the church to shine! And we built Churchteams to be the light on the hill for decentralized ministry.”

This content is written and produced by Religion News Service and distributed by The Associated Press. RNS and AP partner on some religion news content. RNS is solely responsible for this story.