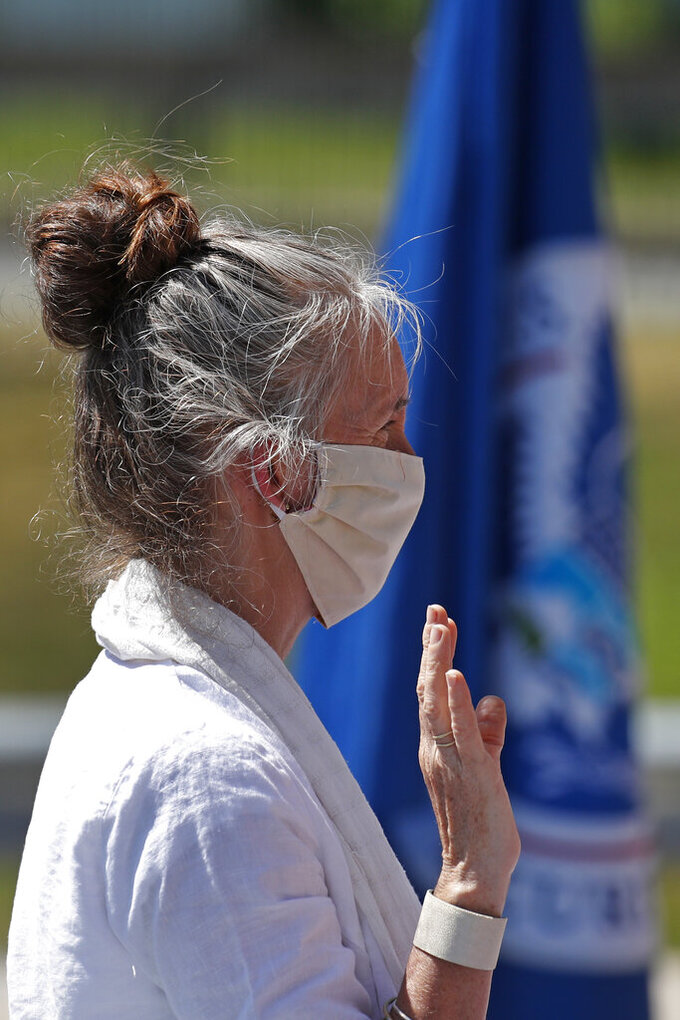 Tamara Sheen, originally from England, is sworn in as a new citizen outside the U.S. Citizenship and Immigration Services building, Thursday, June 4, 2020, in Lawrence, Mass. The federal agency is resuming services in many cities across the country after being shuttered for more than two months because of the coronavirus pandemic. (AP Photo/Elise Amendola)

LAWRENCE, Mass. (AP) — For Albert Baraka, the ceremony outside the federal immigration office in Lawrence, Massachusetts, was brief, but life changing.

The 20-year-old, who came to the country six years ago as a refugee from Congo, joined nine others Thursday morning to recite the oath of allegiance, the final, ceremonial step to becoming a U.S. citizen.

A junior studying business management at Norwich University, a private military college in Vermont, he said he’s looking forward to being able to cast his very first ballot this election.

“In these hard times, it’s a blessing,” Baraka said, standing with his mother, who became a citizen earlier this year, and his younger sister. “Voting is the most important thing for me now because I feel like it’s important to choose wisely in who you want to be your leader, and to speak out on what you believe in.”

U.S. Citizenship and Immigration Services, which is charged with overseeing the nation’s legal immigration system, resumed in-person services in many cities across the country Thursday after closing offices mid-March because of the coronavirus pandemic.

The agency conducted naturalization ceremonies in small groups and allowed limited, in-person visits for interviews, biometric intakes and other immigration matters. In Massachusetts, Baraka was among more than 100 people to officially became a U.S. citizen outside the Lawrence office Thursday.

But immigrant rights groups say the agency still hasn’t come up with an efficient plan to get through the backlog of people already approved to become citizens who had oath ceremonies cancelled in recent months because of the pandemic.

More than 100,000 people nationwide are impacted, and thousands of them each day risk running out of time to become an American citizen before the presidential election, according to Boundless Immigration, a Seattle-based tech company that helps immigrants through the citizenship process.

Registration deadlines for primary elections are approaching in a number of states this summer, and would-be voters must be citizens when they register or risk facing criminal charges or even deportation, Boundless and immigrant rights groups have said.

Xiao Wang, co-founder and CEO of Boundless, said he’s skeptical the agency’s reopening plan will meaningfully address the backlogs, which he predicts will only grow as the election nears.

“Just holding naturalization ceremonies that are smaller and socially distanced is missing the broader opportunity to dramatically improve the process,” he said.

USCIS, which has said it needs $1.2 billion in emergency funding just to avoid insolvency because of pandemic-related economic shutdowns, said reopened field offices are sending out notices to applicants to reschedule their cancelled ceremonies.

“A key aim of this agency has been and continues to be the timely naturalization of qualified and vetted candidates for American citizenship, any suggestion to the contrary ignores an 11-year high in naturalizations last year and a 12% reduction in pending naturalizations,” spokesman Joe Sowers said in a statement Thursday.

More than 4,000 people in the state have been denied the ability to vote because of the delayed ceremonies, a number that will swell to more than 12,000 if oath ceremonies are not consistently conducted before the fall, Harvard Law School’s Immigration and Refugee Clinical Program and other organizations said in a letter to the U.S. District Court for Massachusetts on Wednesday.

The Boston court and USCIS should consider holding virtual ceremonies, or at least waive the oath requirement during the pandemic, said Sameer Ahmed, a clinical instructor with the Harvard Law School program.

Coming up with a plan in case a resurgence of COVID-19 cases forces further economic shutdowns is critical to “ensure even more aspiring Americans do not have to wait indefinitely in the future,” he said.

USCIS has said federal law requires people to take their oath “publicly” and “in person” and that key parts of the ceremony can’t be done virtually, such as collecting permanent resident cards and issuing citizenship certificates.

The current plan in Massachusetts calls for USCIS to swear in 80 to 200 new citizens a day, starting with Thursday’s small group ceremonies in Lawrence, a predominantly Latino city along the New Hampshire state line, according to Judge Dennis Saylor, chief justice of the Boston federal court. USCIS’s Boston office will follow suit Monday, he said.

Then, around mid-July, when the state enters the next phase of its economic restart, the Boston federal court will hold about four ceremonies each day with up to 25 people in each group, according to Saylor. That should clear the backlog of citizenship cases by at least early August.

“Every single judge of this court views this as a priority,” he said. “If I have to stand outside in a parking lot with a bullhorn to get it done, I’d do it. But it’s more complicated than that.”