C.J. Beathard excited for another shot as 49ers starting QB 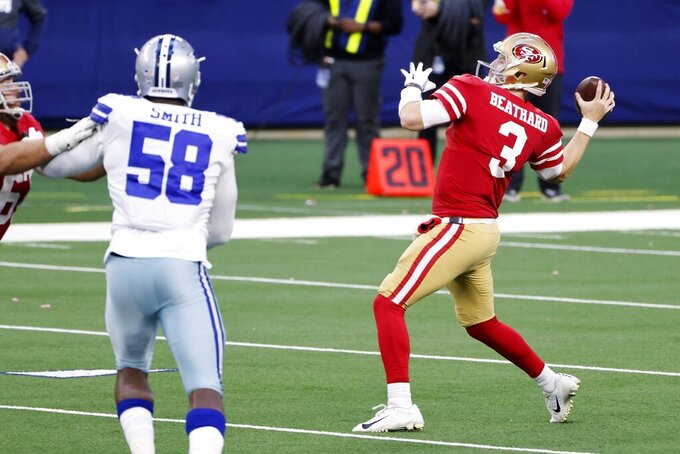 C.J. Beathard’s first few chances to be a starting quarterback in the NFL didn’t go smoothly.

Thrown in as a third-round rookie for the San Francisco 49ers with an overmatched roster, Beathard struggled mightily in 2017. He wasn’t much better the following year when he stepped in after Jimmy Garoppolo got hurt before losing the job to Nick Mullens.

Beathard gets another chance Saturday for the 49ers (5-9) against the Arizona Cardinals with Garoppolo still sidelined by an ankle injury and Mullens out for the season with an injured elbow.

Beathard believes he has developed into a better player than the quarterback who won just one of 10 starts in 2017-18, with 13 interceptions, 12 TDs and a 74.6 rating.

He’s become stronger physically and has worked on getting rid of the ball quicker and improving his movement in the pocket to cut down on the 35 sacks he took in his 10 starts in 2017-18.

This start is also a showcase opportunity for Beathard, whose rookie contract expires after the season, making him eligible to become an unrestricted free agent in March.

“I’m not really thinking of those terms,” Beathard said. “We’ve got two games left here in the season. Obviously, our playoff hopes are dead now. I think it’s an opportunity to go out there and have some fun. ... Don’t think too much about the future because you never know what the future holds.”

After not playing at all last season, Beathard has gotten a few opportunities in mop-up duty this season and has been proficient. He led a late TD drive against Philadelphia and got the Niners in position for a Hail Mary at the end that fell incomplete in a 25-20 loss.

He threw a TD pass in the second half in relief of an injured Garoppolo the following week against Miami and led a drive for a field goal before connecting on a Hail Mary touchdown in last week’s 41-33 loss at Dallas.

“The main thing is just his preparation, regardless of the circumstance or what the situation may be, he’s always ready to go when his number is called,” receiver Brandon Aiyuk said. “That’s the main thing that jumps out from C.J. He has a huge arm. He can make every single throw and he’s super confident.”

This has been a difficult past 12 months for Beathard, whose brother Clayton was fatally stabbed last December outside a bar in Nashville, Tennessee. Beathard returned to the team after a brief absence for the Super Bowl run.

He then spent the offseason back in Nashville with his family, working out in a gym on his own during quarantine before getting some chances to throw during informal sessions with some teammates.

“I think I’ve really learned so much in the last year,” he said. “I’ve never been in as good of a spot as I am mentally than I ever have been just with what I’ve learned and truly knowing where to put my faith and what things get to you and what things don’t get to you. Whereas (in) the past, I might’ve let little things really ruin a day or not. Now I think I’m in a lot better head space. I’m excited for this opportunity.”