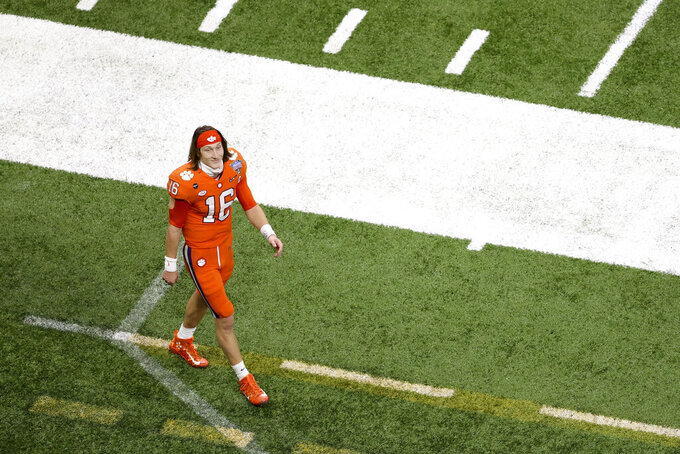 Clemson quarterback Trevor Lawrence has made it official — he's heading to the NFL.

Lawrence, the 6-foot-6 QB with the power arm and flowing hair, released a video on social media Wednesday announcing he was leaving school and declaring for the NFL draft.

“I really feel like I'm a man now and I'm ready to take on those challenges,” Lawrence said. “Super excited for life ahead. I'm grateful for Clemson and I'm going to miss it.”

Lawrence had said in September he planned to play his junior season, graduate in December and move on to the NFL. However, in October, Lawrence discussed keeping his options open, which included possibly returning for another year of college as discussions of the No. 1 pick intensified between the then winless New York Jets and the Jacksonville Jaguars.

The Jaguars finished 1-15 and have the top pick in the draft and are expected to take Lawrence.

He finished 34-2 in his college career, leading Clemson to three Atlantic Coast Conference titles and the national title after the 2018 season. He finished second in the Heisman Trophy race Tuesday night to Alabama receiver DeVonta Smith.

“There will be a lot of people trying to live up to the standard that he set as a quarterback for a long time in this game,” Swinney said before the Tigers' 49-28 Sugar Bowl loss to Ohio State that ended their season a game short of the national title contest.

Lawrence was the epitome of cool and confident almost from the moment he arrived at Clemson in January 2018. It took four games as a freshman before he became the starting quarterback and never surrendered the position — except for two games this season he missed after testing positive for COVID-19.

Lawrence led the Tigers to the national title in 2018, dismantling powerhouse Alabama 44-16 as he threw for 347 yards and three touchdowns to complete a 15-0 season.

Clemson and Lawrence looked they would make it two in a row a year ago before falling to LSU 42-25 to end a 29-game win streak in the national championship game.

Lawrence acknowledged he had decisions to make this season as the coronavirus pandemic raged across the country and many wondered if anyone should play college football. But Lawrence among other players like Ohio State quarterback Justin Fields, pushed to keep the game going this fall.

Lawrence began a GoFundMe page this spring to help those needing help handling the virus and was instrumental in Clemson's social and racial justice efforts this summer.

On the field, Lawrence finished with 10,098 yards passing with 90 touchdowns and 17 interceptions. This year, he completed a career best 69.1 percent of his throws on the way to winning ACC player of the year.

Lawrence believed he became a better person by remaining in school and graduating with a bachelor's in marketing.

“I’ve learned a lot about myself about, who I want to be, just all those things," he said.