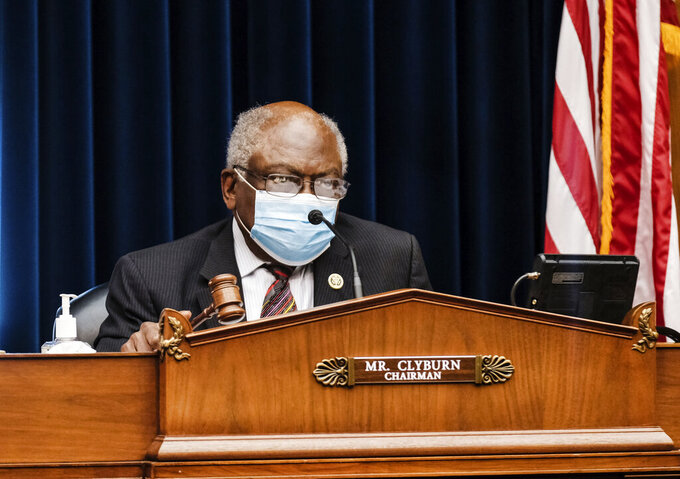 COLUMBIA, S.C. (AP) — Two congressional leaders, including the South Carolina congressman at the helm of a special subcommittee managing a multitude of issues related to the coronavirus pandemic, are asking the nation's top education official to review a proposal by South Carolina's governor to allocate millions of dollars so that students can attend private and religious schools, a program that they call “a voucher scheme."

In a letter sent Monday to U.S. Secretary of Education Betsy DeVos and obtained by The Associated Press, U.S. Reps. Jim Clyburn and Bobby Scott say Gov. Henry McMaster's use of discretionary funds in this manner “appears to violate the plain text” of a federal coronavirus aid package, as well as the Department of Education's “related guidance.”

Scott, a Democrat from Virginia, chairs the Committee on Education and Labor. Clyburn, the House Majority Whip, chairs the Select Subcommittee on the Coronavirus Crisis.

In July, McMaster, a Republican, announced the allocation of $32 million of federal money related to the coronavirus outbreak to tuition grants for students attending private schools across the state. During an event at a Christian school in Greenville, the governor said he expected the funds to cover about 5,000 grants of up to $6,500 for students to attend parochial, private and independent schools in the upcoming academic year.

The one-time program aims to help families whose finances have taken a hit from the pandemic’s economic fallout. The governor said enrollment in the state’s private and independent schools was estimated to decline by up to 20% this year because parents cannot afford tuition. Some 50,000 South Carolina students currently attend such schools.

The move was immediately challenged, in a legal a case that’s still pending before South Carolina’s Supreme Court. Justices heard arguments in the case last month, considering whether the funds — the majority of the $48 million in discretionary education dollars granted to McMaster by the federal Department of Education — are considered public money, and how they can be used.

In their letter, Scott and Clyburn say McMaster's program violates the spirit of the emergency fund, which was intended for use by governors to allocate to educational agencies, not directly to parents.

On Monday, McMaster spokesman Brian Symmes called the request “good news for all involved,” noting that federal Education Department officials have “already looked into the SAFE Grants program.” In September, DeVos wrote to top school officials across the country saying the department wouldn't challenge a Sept. 4 federal court ruling vacating her earlier directive to channel more coronavirus aid to private-school students, but adding that her agency “will not take any action" against states that had already done so.

Deputy Education Secretary Mick Zais, who previously served as South Carolina's education superintendent, has also voiced support for the program. In August, he wrote to McMaster that it “gives families the hope for a better future that comes when educational services are the right fit for each individual child in their unique learning path.”

Though school choice advocates have praised the governor’s announcement, critics say the school voucher program lacks the accountability public funds require and excludes the most disadvantaged students in public schools.

Another $2.4 million designated by McMaster for technology improvements to historically Black universities and colleges in the state is also on pause due to the lawsuit.

Republican governors in several other states have directed their discretionary funds toward private schools. Elsewhere, governors have also spent their funds on Wi-Fi in school buses, tutoring from Teach for America recruits and mental health supports.

The Palmetto State Teachers Association has argued that federal public dollars will flow to independent schools not subject to public accountability standards that are also allowed to deny admission to students based on criteria such as religion or disability status.

Clyburn and Scott also ask DeVos to review the grant program, as well as provide “all communication between any representative of the South Carolina Governor’s office and the Department of Education related to the development, implementation, or legality of South Carolina’s SAFE grant program” by Oct. 16.