Cohen seeks to dismantle Trump legacy, one podcast at a time 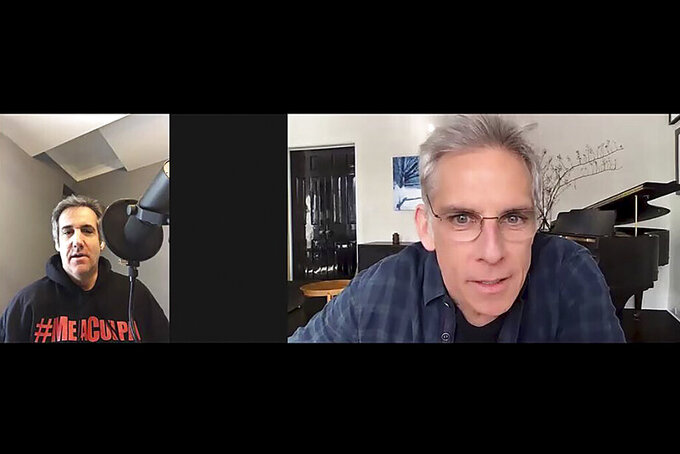 In this video frame grab provided by Michael Cohen, Cohen, left, interviews actor Ben Stiller for his podcast "Mea Culpa", in New York. Cohen says his new podcast "Mea Culpa" is changing the minds of listeners who supported President Donald Trump. The president's former lawyer and fixer is producing the podcast from his Manhattan apartment even as he serves the remainder of his prison sentence on home confinement. (Michael Cohen via AP)

NEW YORK (AP) — The rehabilitation of Michael Cohen has reached a surreal new stage: Quizzing the actor Ben Stiller about his approach to impersonating him on “Saturday Night Live.”

Since September, President Donald Trump's former lawyer and fixer has been producing a podcast from the Park Avenue apartment where he is serving the remainder of his prison sentence for lying to Congress, evading taxes and facilitating campaign finance crimes.

The show, “Mea Culpa," has been downloaded nearly 3 million times and is available in 37 countries, Cohen said. Before Stiller, featured in an episode released Friday, guests have included Rosie O’Donnell, the magician and former “Celebrity Apprentice” star Penn Jillette, political journalists, and current and former operatives from both parties, including James Carville and Anthony Scaramucci.

The topic of every show so far? Blistering criticism of the president’s every move.

Cohen, who once famously claimed he would take a bullet for Trump, said he has made it part of his penance to dismantle Trump's legacy and “return this nation to a place of sanity,” though he categorizes his show as “a news commentary program” instead of an “anti-Trump program.”

He said he plans to continue his podcast throughout the Biden administration.

“We cannot fool ourselves into believing that Trump will just disappear,” he told The Associated Press. “Accordingly, he will continue to remain a topic of discussion.”

The launch of the podcast followed Cohen's publication over the summer of a tell-all memoir about his conversion from Trump acolyte to avowed enemy.

In his interview with Stiller, Cohen likened Trump's signature scowl to the visage of Derek Zoolander, Stiller’s pouty male model persona. Stiller, for his part, said he recognized in Cohen the “dichotomy” of fear and a killer instinct.

“I felt like there was a humanity in there that I was trying to connect with,” Stiller said, adding he didn't want his SNL impression “to be this scathing, mean thing.”

Cohen, on the other hand, seems to be going for the jugular, while satisfying his own addiction to the limelight.

He rails breathlessly in every show against the “idiot in chief." In one recent episode of “Mea Culpa,” he complained that the presidential pardon process had “devolved into a corrupt and transactional circus, with Trump as its ringmaster.”

Trump cutting short his recent Florida vacation and returning to Washington to double down on his challenge to the election results “sent my blood pressure through the roof!” Cohen told listeners in his Long Island cadence.

Cohen, despite years of introspection, has remained at a loss to explain his unswerving allegiance to a businessman he feels abandoned him at the most vulnerable point in his life. He has likened his fealty to Trump to a mental illness and said he thought of himself as acting like a drug user in need of an intervention.

The “most important victory” of the podcast, Cohen said, is that he believed some people who once supported Trump changed their minds after listening.

“I have learned that there are tens of thousands of people who are exhausted and anxious and in need of some type of outlet to channel their frustration about our current political climate," Cohen told the AP. "If I can help them deal with their fears or feel somewhat better about the darkness that is enveloping all of us, I feel like we’ve accomplished something extraordinary.”

Cohen, 54, had been scheduled to remain in prison until November 2021 but was released in May to serve the remainder of his sentence at home as part of an attempt to slow the spread of the coronavirus in federal prisons.

He was further emboldened to speak out after briefly returning to prison last year in what a federal judge ruled was government retaliation for Cohen balking at a proposed provision of home confinement that would have severely restricted his public communications.

Reception to the show, like to Cohen himself, has been across the board. So far, Cohen said, “the show is profitable” for its production company, the Los Angeles-based startup AudioUp.

The success or failure of “Mea Culpa” could serve as a litmus test for the viability of the disbarred attorney and other erstwhile Trump loyalists after the president leaves office.

“It’s probably going to wane and be relegated into some dark, niche corner of the culture, where Cohen himself belongs,” said Nick Quah, the founder of Hot Pod, a well-read newsletter about podcasts.

In the foreword to his bestselling memoir, “Disloyal," Cohen acknowledged critics consider him “the least reliable narrator on the planet."

The White House, for its part, has dismissed Cohen’s criticism as “fan fiction” and said it’s “unfortunate that the media is exploiting this sad and desperate man to attack President Trump.”

Asked whether he thought Trump has tuned in, Cohen said: “I don’t believe he has, as his attention span is limited to under 3 minutes and my episodes last longer than an hour.”

"Rest assured though," he added, “Trump has others listening to ‘Mea Culpa’ and reporting back to him on the content.”