Cole looks forward to family and fans at Yankee Stadium 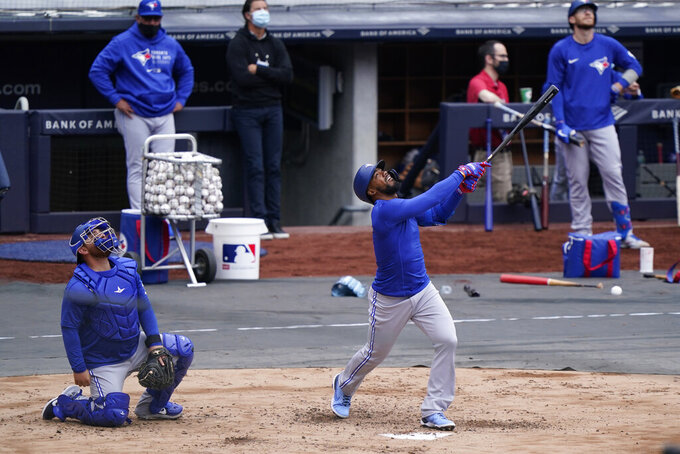 NEW YORK (AP) — Gerrit Cole’s dad will watch him pitch at Yankee Stadium in pinstripes for the first time, one of about 10,850 fans allowed in to watch New York’s opener against the Toronto Blue Jays.

“I had trouble sleeping last night, so I probably anticipate going to be the same thing tonight,” Cole said Wednesday.

Cole’s first season with Yankees was played entirely without fans because of the pandemic.

“It was a bit surreal at first, and then it became kind of standard operating procedure. There were more important things that we needed to focus on,” Cole said. “Every time I see a fan or sign an autograph for a kid, I’ll remember at one point this was taken away from us.”

Bleacher Creatures are expected back along with their first-inning Roll Call.

Cole revealed his father did manage to see him pitch in person at San Diego during the season-ending, five-game Division Series loss to Tampa Bay, even though no tickets were sold.

“I can’t imagine what he’ll be feeling,” the pitcher said. “It was nice to get him into the playoffs last year and see a postseason start in San Diego, but this is the Mecca. This is Yankee Stadium, so he’s going to be pretty fired up.”

New York was streaky during a season that included a 16-6 start followed by a 5-15 slide, a 10-game winning streak and six losses in the last eight games. The Yankees were 22-9 at home and 11-18 on the road, and a long-ball dependent offense scored 156 of 315 runs on homers.

First baseman Luke Voit, the major league home run champion, will be missing following surgery Monday to repair a torn meniscus in his left knee, an injury expected to sideline him until May.

“I’m glad I got it done. It’s something that popped up early in spring and just kind of got better as we went on, but I just didn’t feel right and that’s why I decided I wanted to do the MRI,” Voit said. “No timetable yet, but I expect to be back pretty quick.”

Winning another home run title will take a power run.

“I’m going to have to make up for a lot of them, because I’m going to miss some time,” Voit said. “Obviously, I wanted to prove a lot of people wrong this year and do it again. There was a lot of doubters.”

Clint Frazier is the regular left fielder for the first time in his fifth season with the Yankees, given the job over Brett Gardner heading into spring training. He admitted “I had a lot of bitterness at times” but he wanted “to beat all the odds.”

"When I really look at my time here, it’s not gone exactly how I thought it would go, but I’m super-thrilled that’s it’s finally here: I’m going to get my chance,” he said. “And I feel really good about running away with the job right now.”

Left-handed reliever Zack Britton is out until May or June following surgery on March 15 to remove a bone chip, an injury that opened a spot for Lucas Luetge to be added to the big league roster Wednesday.

Toronto is set to embark on its second season away from home due to Canadian government coronavirus restrictions. After playing home games last year at its Triple-A farm team in Buffalo, the Jays have shifted their first three homestands this season to their spring training stadium in Dunedin, Florida.

Considered an AL East favorite after adding outfielder George Springer and infielder Marcus Semien to a young core led by Bo Bichette, Vladimir Guerrero Jr. and Cavan Biggio — all sons of major leaguers, the Blue Jays open without Springer because of a strained oblique muscle that caused him to start on the injured list.

Manager Charlie Montoyo said Ross Stripling will follow Hyun Jin Ryu in the rotation and will start Saturday and that T.J. Zeuch was likely to start Sunday’s series finale. Left-hander Steven Matz is further back in the rotation.

Left-hander Robbie Ray will start on the injured list while recovering from a bruised left elbow sustained when he fell on stairs on March 23.

Toronto also acquired catcher Juan Graterol from the Los Angeles Angels for cash and assigned him to the alternate training site.