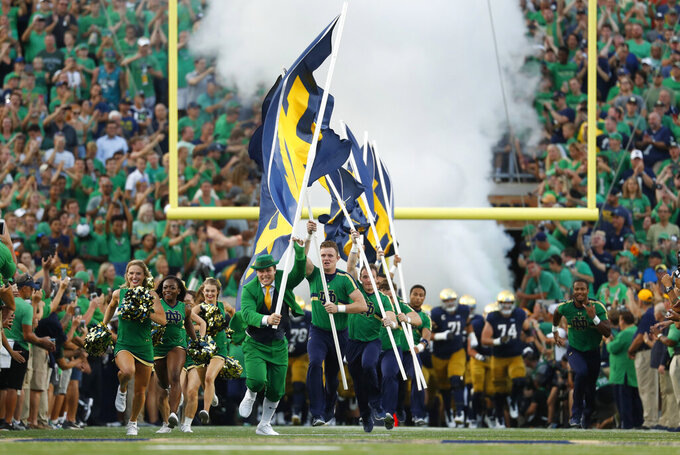 FILE - In this Sept. 1, 2018, file photo, a Notre Dame leprechaun mascot leads the team onto the field before an NCAA football game against Michigan in South Bend, Ind. In 2021, college football will attempt to return to normal after a season roiled by the pandemic while also adapting to a new paradigm in which the athletes have more power than ever before. (AP Photo/Paul Sancya, File)

College football will attempt to return to normal in 2021 after a season roiled by the pandemic while also adapting to a new paradigm in which the athletes have more power than ever before.

A COVID-19 vaccine brings hope for a season with full schedules, fewer disruptions and more fans in the stands.

“I know that there’s a lot in front of us,” Boston College athletic director Patrick Kraft said. "But I do believe that good times are coming. We’re going to get back to having full stadiums and the athletes having their parents come and watch them play. And campus being abuzz Saturday morning or Friday night. Yes, I feel that’s coming."

First things first: The tumultuous 2020 season is scheduled to end Monday night with No. 1 Alabama facing No. 3 Ohio State for the national championship in suburban Miami. A few hours earlier, the NCAA’s Division I Council is scheduled to consider a proposal that for the first time would permit college athletes to be paid — though not by their schools — for things like endorsements, sponsorship deals and personal appearances.

Dr. Cameron Wolfe, an infectious disease specialist at Duke who led the Atlantic Coast Conference's medical advisory panel, is cautious when talking about a return to normal next football season.

The availability of effective vaccines and lessons learned about mitigation strategies give reason to believe that college football will run more smoothly. If nothing else, another summer of uncertainty over holding a season at all seems unlikely.

“We're very confident that the current vaccine has wonderful protection against the current strain of COVID," Wolfe said. "And you can hear my current emphasis there because there are some folks who are a little nervous that some strain mutations that we’re starting to see ... may impact vaccine protection.”

Even if the vaccine stays ahead of the virus, there could still be surveillance testing next fall in athletic departments. And schools might be hesitant to demand athletes be vaccinated for COVID-19, but they could require routine testing for those who are not.

Face coverings, social distancing and other mitigation strategies won't disappear, but the hope is constant testing of athletes — and the stress that comes with knowing the next round could be the one that shuts down a team — is less likely to be carried over into 2021.

This season, nearly 130 major college football games were postponed or canceled directly because of COVID-19 issues involving one team or both. Overall, 87% of scheduled games were eventually played.

West Virginia athletic director Shane Lyons, the chairman of the NCAA’s football oversight committee, said he anticipates a more normal 2021 Bowl Subdivision season, starting with a typical spring practice schedule that was largely wiped out in 2020. He expects a season that includes nonconference games, starts on Labor Day weekend and ends in early December.

As for full stadiums, that's a very different question. Schools and conferences lost hundreds of millions of dollars in revenue with few if any fans in attendance.

Bands and cheerleaders could return to the field, but packing stadiums will be a challenge, Wolfe said. Smith said maybe fans will be required to show proof of vaccine to attend games or advancements in testing will allow fans to be approved on game days.

As for digging out of the financial hole: “The recovery is a multiyear situation,” Mid-American Conference Commissioner Jon Steinbrecher said.

The name, image and likeness proposal in front of the the Division I Council would allow athletes to earn money from outside sources, with some limitations.

Lastly, a third party will be in charge of monitoring deals athletes make for fair market value and improprieties.

“This is arguably the most fundamental shift in the relationship between universities and college athletes in a century,” said Gabe Feldman, director of Tulane's sports law program.

There are still many questions to sort through and there is also a chance next week's vote might not happen. Some college sports leaders, including Southeastern Conference Commissioner Greg Sankey, have said a delay might be in order because no matter what the NCAA does, nothing is truly set until Congress weighs in.

“I personally, hope we vote on it. Even if we have to change the effective date,” said Smith, who played a major role in crafting the Division I legislation.

There is also now a pending Supreme Court case involving the NCAA and athlete compensation.

Many coaches are worried college football is heading down a familiar and undesirable path.

Todd Berry, executive director of the American Football Coaches Association, said allowing college athletes to be paid by third parties will lead to the type of booster-fueled, pay-for-play scandals that were rampant in in the 1970s and '80s.

The DI Council is also expected to clear the way for athletes to transfer one time as an undergraduate without sitting out a season.

The transfer portal is already overflowing with football players looking to move in anticipation of the rule change. Smith said the most recent count he received was 2,500.

Combine that with the NCAA giving all fall athletes a free year of eligibility for playing through the pandemic and roster management next season will be more challenging than ever.

Returning seniors won't count against the 85-scholarship limit in 2021. Some rosters will be bloated. Other teams might not welcome back upperclassmen. Some teams could load up on transfers. Many players looking to switch schools won't have the opportunities they were hoping for.