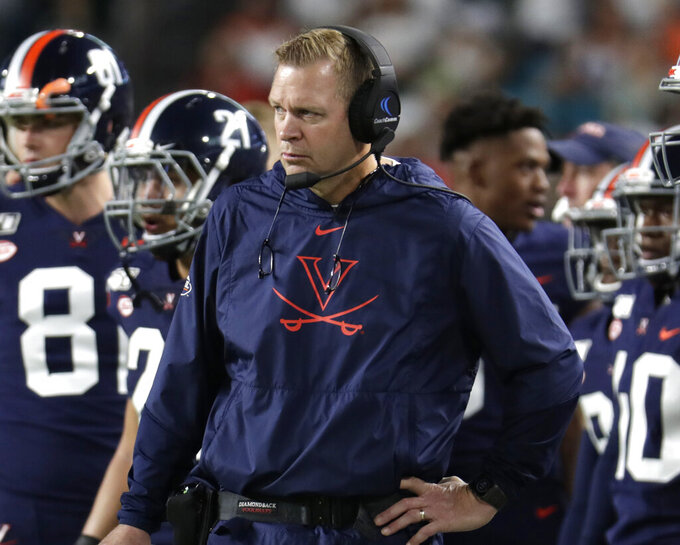 FILE - In this Oct. 11, 2019, file photo, Virginia head coach Bronco Mendenhall watches the first half of an NCAA college football game against Miami in Miami Gardens, Fla. College football coaches are facing the daunting challenge of getting their players to maintain the required focus to prepare for season-openers when the prevailing question swirling around the sport is when, or if, the season will even be played because of the worldwide coronavirus pandemic. (AP Photo/Lynne Sladky, File)

College football coaches are facing the daunting challenge of getting their players to maintain the required focus to prepare for season-openers when the prevailing question swirling around the sport is when, or if, the season will even be played because of the worldwide coronavirus pandemic.

Preparation is a regimented endeavor. Practice periods are measured on a clock on the field, whistles signal the time to hustle from one drill to another. And uncertainty is a formidable opponent to the process.

Virginia coach Bronco Mendenhall said it adds an “emotional drain" to the rigor of weight lifting and fitness, film study and psychological preparedness.

“With so many variances on the outside of start, stop schedule, new schedule, continued start, stop, there’s an existing emotional drain and distraction that is very difficult in terms of managing the external environment that does spill over,” Mendenhall said Monday on a Zoom call with reporters.

“The effort, based off all the stuff that’s gone on, I almost feel like it’s been a release that they can actually lose themselves and do something that they really enjoy with a bunch of guys that are all COVID -free and running around and having fun," Babers said on Zoom.

“You see guys, their demeanors have changed,” he said. “They have something to look forward to. Our guys have new energy when they’re out there. They’re able to get off their phones. They’re able to get away from all the uncertainty and they’re really going to do what they love to do. So that’s been a positive experience and I hope it continues."

The Mountaineers, Brown said, have no current COVID-19 infections.

Army coach Jeff Monken prefers his team focus on when, not if, games are played.

The Black Knights' biggest challenge might be finding opponents. Their only confirmed home game is Nov. 7 against Air Force. The other five scheduled visitors have canceled.

Whatever their take on the situation, coaches at the top levels of college football are facing the distraction challenges. Louisville coach Scott Satterfield refers to it as “the elephant in the room."

Connecticut and Old Dominion have also canceled, bringing to 14 the number of schools at the top level to forgo the fall, along with numerous conferences one step down in the Football Championship Subdivision.

“What we understand is that the ACC is moving forward,” Satterfield said Monday. “And we’re relying on our medical group that’s over the ACC and what they are projecting to us is that we’re moving forward with everything. And so that’s where we are today.

“We know how things change and how fluid it is. But that’s what we are.”

Brown, at West Virginia, hopes teams will be competing on the field soon.

“I think we can make it work in the fall. I think it’s doable," he said. “I think we can do it in a safe manner. I think the biggest question is — and this is something that people aren’t talking about — what’s the plan if we don’t play?”