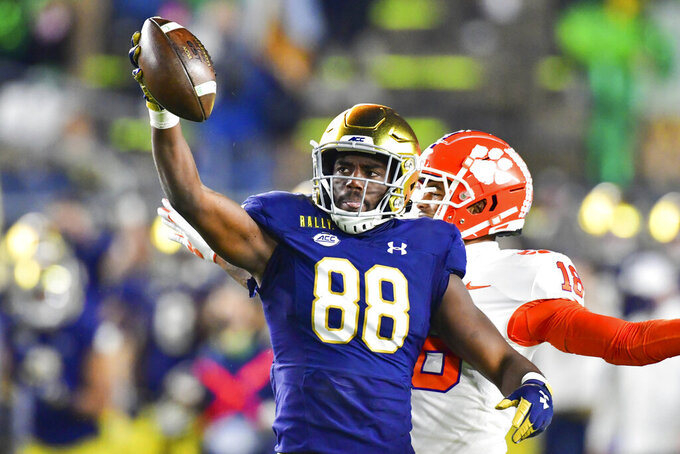 Maybe the most famous field goal in Boston College history is getting talked about a lot this week.

Now, a little less than a week short of exactly 27 years later, No. 2 Notre Dame faces BC a week after knocking off No. 1 Clemson. Odd coincidence or ominous sign of things to come?

Across major college football this weekend the theme was ranked teams hitting the road as sizable favorites — then over the course of about 24 hours the Nos. 1, 3, 5, 12 and 24 teams had their games called of because of COVID-19.

Most notably top-ranked Alabama at LSU was postponed with no guarantee it will be rescheduled and No. 3 Ohio State at Maryland was canceled altogether as the Big Ten's nine-week schedule has no open dates built in for make-ups.

It's still game on for Notre Dame, which had its coronavirus issues earlier in season. The Fighting Irish are favored by about two touchdowns at Boston College. It was just two weeks ago that the surprising Eagles (5-3) went to Clemson and took an 18-point lead in the first half before succumbing.

Of course what happened 27 years ago has no bearing on this weekend, but just in case: BC kicker Aaron Boumerhi is a transfer for Temple who is 10 for 14 this season on field goals with a long of 41 yards.

Bearcats are looking for their first 7-0 start since 2009, when they went unbeaten in the regular season under Brian Kelly ... CINCINNATI 42-13.

Hokies are coming off a painful loss to Liberty while the 'Canes still have ACC title hopes ... VIRGINIA TECH 35-31.

Hoosiers are a win away from going to Ohio State 4-0 for what could set up to be one of the biggest games in program history ... INDIANA 24-14.

Badgers and Wolverines have split four meetings in the last four years, with the home team winning each game ... WISCONSIN 35-24.

Trojans are no pushover for the the surprising Chanticleers ... TROY 28-24.

Getting on the field has been tricky for the Golden Hurricane but they are unbeaten in conference play ... SMU 31-24.

No. 20 Southern California (minus 14) at Arizona

Trojans needed a fair amount of good fortune to steal a victory against Arizona State last week, but the Wildcats might not pose as many problems as their in-state rivals ... USC 45-21.

Flames have an FCS tune-up before finishing with North Carolina State and Coastal Carolina ... LIBERTY 56-14.

Ragin' Cajuns have won four straight in the series but all by 10 points or fewer ... LOUISIANA-LAFAYETTE 34-21.

Penn State (minus 3) at Nebraska — @oriolesfactoids

Nittany Lions and Cornhuskers have combined for seven national championships in their storied histories and zero victories in five games this season ... PENN STATE 27-21.

Tar Heels are currently the best team in the country not ranked — not that they didn't earn it by losing to Florida State and Virginia ... NORTH CAROLINA 42-24.