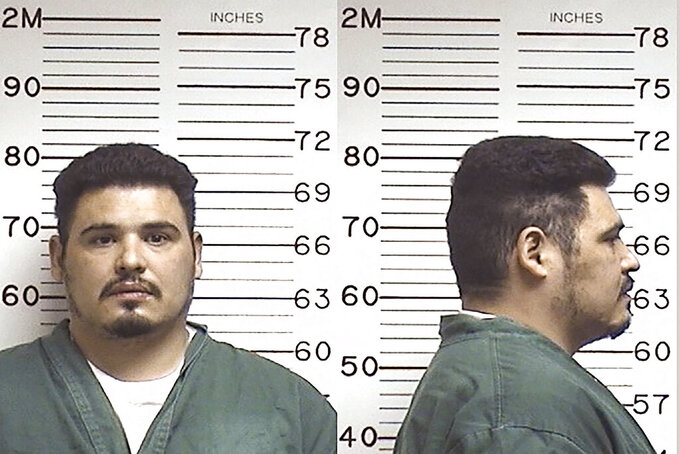 In this undated booking photo provided by the Colorado Department of Corrections is Juan Jose Figueroa Jr., 32, who is currently serving time at the Buena Vista Correctional Facility in Buena Vista, Colo., for his conviction in a Longmont sex assault case in 2017. The first grand jury convened in Boulder, Colo., since the coronavirus pandemic began charged Figueroa on Friday, June 4, 2021, with murder and kidnapping in Rita Gutierrez-Garcia's death, relying in part on statements he allegedly made about the killing that were captured on a wiretap in the prison where he is serving a 93-year-to-life sentence. (Colorado Department of Corrections via AP)

BOULDER, Colo. (AP) — When a man who fled to Mexico after being suspected in the disappearance of a Colorado woman in 2018 returned to the United States, he seemed almost relieved to learn that he was wanted for a sexual assault and would likely be extradited to Colorado, according to a grand jury indictment announced Friday.

“That’s it? ... Just sexual assault? ... Sweet (claps) let’s get this over and done with so I can get my bond, get it posted," Juan Jose Figueroa said, according to the indictment.

However, authorities viewed Figueroa’s prosecution in the 2017 sexual assault of another woman he met at a bar in Longmont as a stepping stone to eventually holding him accountable for the disappearance and presumed death of Rita Gutierrez-Garcia months later.

The first grand jury convened in Boulder since the coronavirus pandemic began charged Figueroa on Friday with murder and kidnapping in Gutierrez-Garcia’s death, relying in part on statements he allegedly made about the killing that were captured on a wiretap in the prison where he is serving a 93-year-to-life sentence in the 2017 sexual assault case.

Grand jurors, who convened in court in evenings starting in April wearing masks and practicing social distancing, also had the power to force witnesses to appear before them to offer testimony, unlike investigators, Boulder District Attorney Michael Dougherty said at news conference announcing the charges.

Online court records show Figueroa is being represented by public defenders, who do not comment on cases to the media. It's not known when he will be able to appear in court, given restrictions on the movements of prisoners between state prisons and county jails because of COVD-19, Dougherty said.

He was joined outside court by police and Guitierrez-Garcia’s mother, Diane Romero, and her two sisters. Her three sons stayed inside the building as the news was announced.

Romero called it a day that was both heartbreaking and joyous. “I have been praying for this day, so God has given this to me,” she said.

It took so long to bring charges against Figueroa partly because Gutierrez-Garcia’s body has not been found, Dougherty said.

In one of the wiretapped conversations, Figueroa allegedly said that he had buried her body and the only way to find it would be if “police inserted a probe into his brain,” according to the indictment.

Investigators and her family did not believe Guitierrez-Garcia, who was a month away from finishing her education to become a paralegal, ran away. But authorities still spent a lot of time working to prove that she was not alive, monitoring her social media and financial accounts. All have been inactive since her disappearance after going out with friends and cousins to celebrate St. Patrick’s Day in 2018, according to the indictment.

Guitierrez-Garcia’s sister, Jessica Reyes, thanked prosecutors and Longmont Police Detective Cody Clark for their work on the case. She urged people not to forget her sister.

“Remember her more than anything and not as a victim, but she will be victorious. She is not going to be a victim,” Reyes said.