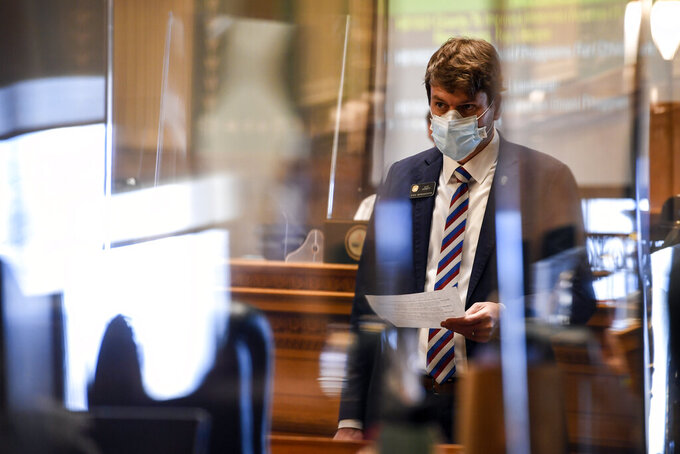 Democratic Rep. Alec Garnett reads a document and can be seen standing between panes of protective glass during a special legislative session at the Colorado State Capitol Wednesday, Dec. 2, 2020, in Denver. Colorado lawmakers have passed several bills offering assistance to restaurants and food pantries struggling to keep their doors open during the coronavirus pandemic. The special session that was called by Gov. Jared Polis ended on Wednesday. (AAron Ontiveroz/The Denver Post via AP)

DENVER (AP) — In an effort to keep Colorado residents fed and employed this winter, the state Legislature concluded a special session Wednesday by passing bills offering assistance to restaurants and food pantries struggling to keep their doors open during the pandemic.

Democratic Sen. Tammy Story, the sponsor of a bill to add $5 million for the state's Food Pantry Assistance Grant Program, stressed that one out of three Colorado residents doesn’t have enough food because of the pandemic's economic fallout.

Lawmakers said the tax credit bill would provide may not provide much relief because fewer people are eating out because indoor dining is banned in most of the state under public health restrictions. They were receptive to hints from restaurant owners who said more financial help may be needed when the regular 2021 legislative session begins in January.

This week's emergency legislative session was called by Democratic Gov. Jared Polis, who cited a lack of additional federal aid to help businesses.

The state lawmakers also passed bills creating and expanding grant programs to improve internet access for students, to give loans and grants to childcare providers and to help people struggling to pay their utility and housing bills.

The total legislative funding for new virus assistance grants and direct payments amounted to $180 million, plus $100 million for the governor's disaster fund to address the pandemic.

Additionally, Polis said more than 400,000 Colorado residents who received up to $500 in weekly unemployment payments from March 15 to Oct. 24 would begin receiving a one-time state funded $375 check. He originally issued an executive order for the payments in October.

The return of lawmakers to the Capitol highlighted partisan approaches to the pandemic, with many minority Republicans refusing to wear masks while on the floor and in committee meetings. Democrats at the session wore masks and others attended online.

The Democrats, who dominate the Legislature, added a clause in the small business grant bill specifying that firms will only be eligible for grants if the cities and counties where they are located comply with state public health orders.

Republican Rep. Dave Williams of Colorado Springs called the measure punitive and commended businesses for not complying with the “one-size-fits-all” public health order by the state for counties to prohibit indoor dining.

“You have a hundred restaurants saying they’re not going to comply. And to that I say, ‘God bless you.’ I think we need a little bit more civil disobedience,” Williams said.

In response, Democratic Rep. Cathy Kipp said the decision by many Republican lawmakers to not wear masks at the Legislature was offensive and called Williams' statement irresponsible.

“I am not going to tolerate people encouraging the kind of civil disobedience that will cost lives," Kipp said with her voice shaking. "That is not okay.”

In response to comments by the GOP praising restaurants that defy public health orders, Polis reiterated his stance that Colorado residents should follow state-issued protocols.

“We honor the law. We are a nation of laws. We are a state of laws. People can try to change the laws and they do through the democratic re-elected process," Polis said "And that’s a right we all have as Americans, but we also have a responsibility to follow a law and I think that Rep. Williams knows that.”

To provide another boost to restaurants, lawmakers also passed legislation allowing local municipalities to cap the fees that third-party delivery companies such as DoorDash or Grubhub charge retail food establishments. The bill also requires delivery services to disclose how much they charge restaurants to consumers.

In October, Denver joined other cities across the U.S. in capping delivery fees charged restaurants at 15% per order.

The legislature-approved bills will be sent to the governor and signed into law. Polis tested positive for the coronavirus earlier this week and made it a point to say he will spray the envelope containing the bills and use gloves to give it back to a state trooper.

Nearly 2,700 people in Colorado have died from the coronavirus and 237,000 have been confirmed infected with the virus, straining the state’s emergency hospital capacity.