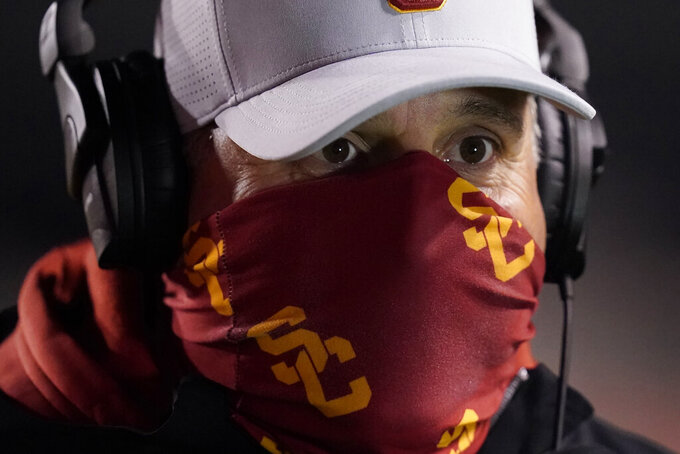 LOS ANGELES (AP) — No. 19 Southern California’s scheduled home game Saturday against unbeaten Colorado has been canceled due to positive COVID-19 tests for the Trojans.

In a statement Thursday night, the Pac-12 said USC (3-0) didn’t have the minimum number of scholarship players available at a specific position group as a result of at least two positive COVID-19 cases and the resulting isolation of additional players under contact tracing protocols. The Trojans haven't identified the position or the players involved.

“We are disappointed for our players and fans and those from Colorado that Saturday’s game will not be played, but the health and safety of everyone in both programs is of the utmost priority," USC coach Clay Helton said in a statement. "We will continue to test and monitor our players, coaches and staff and take guidance from health officials as we prepare for our remaining games.”

Colorado moved quickly to secure another game against Aztecs, whose game against Fresno State scheduled for Friday was canceled last Sunday due to positive tests for the Bulldogs.

USC also held its team activities virtually Tuesday after a player who had traveled to the Trojans’ win at Utah last weekend tested positive for COVID. Another player tested positive Wednesday before the Trojans held their normal practice, and five additional players were quarantined due to contact tracing.

The Trojans haven’t said which players are involved, but Helton confirmed they include starters.