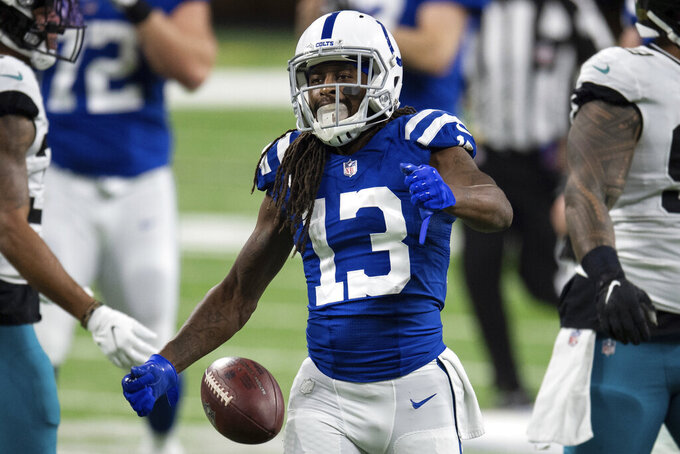 FILE - In this Jan. 3, 2021, file photo, Indianapolis Colts wide receiver T.Y. Hilton celebrates a catch during the team's NFL football game against the Jacksonville Jaguars in Indianapolis. Hilton tested the free-agent market and came to the same conclusion he made last summer — he wanted to stay in Indianapolis. So on Wednesday, March 24, the longtime Colts receiver agreed to a one-year contract worth $10 million and $8 million in guaranteed money. (AP Photo/Zach Bolinger, File)

INDIANAPOLIS (AP) — T.Y. Hilton tested the free-agent market and came to the same conclusion he made last summer — he wanted to stay in Indianapolis.

So on Wednesday, the longtime Colts receiver agreed to a one-year contract worth $10 million and $8 million in guaranteed money.

For Hilton, it marks the end of a foray he never really intended to take.

“One thing i kno about this city. Is that they love me. And i love them,” he wrote on Twitter, confirming the deal. “I listen to all the songs. I read all the tweets. I will cherish this forever. It’s only right i finish what i started. #TYISHOME.”

But the four-time Pro Bowler made it clear months ago his preference was to stay with the Colts, the only team he's played with since being selected in the third round of the 2012 draft. He's the last member of that draft class still on Indy's roster.

Whether it was his trademark touchdown celebration, using his arms to form the letters “T" and “Y," or his locker room presence, Hilton's impact went well beyond his impressive numbers.

He ranks third in franchise history in yards receiving (9,360), trailing only Hall of Famer Marvin Harrison and Hall of Fame finalist Reggie Wayne. His 608 career receptions are fourth on the team's career list behind Harrison, Wayne and Hall of Famer Raymond Berry and he's tied with Jimmy Orr for fourth in touchdown receptions (50).

While Hilton's numbers dipped dramatically during an injury-filled 2019 season and remained down last year as he tried to get in sync with new quarterback Philip Rivers during the COVID-19 pandemic, the Colts still believe the 31-year-old Hilton has a lot to offer.

His teammates concurred with Irsay's opinion.

Two days after asking his Twitter followers where Hilton was using the ghost emoji, receiver Zach Pascal returned to the social media site to proclaim “I found him." Cornerback Kenny Moore II simply tweeted “boo" with a ghost meme.

The Colts also believe the pairing of Hilton and newly acquired quarterback Carson Wentz along with a receiving group that includes Pascal and three draft picks from the past two years — Michael Pittman Jr., Parris Campbell and Dezmon Patmon — could help the 31-year-old Hilton regain his old form.

In addition to the trade for Wentz, Indy also is attempting to plug other holes.

The Colts also announced Wednesday they had re-signed cornerback Xavier Rhodes to a one-year deal and added offensive tackle Sam Tevi from the Los Angeles Chargers. Tevi has started 44 games over the past three seasons, spending 2018 and 2019 primarily at right tackle before moving to left tackle last season.

Tevi could be in the competition to fill in for the retired Anthony Castonzo at left tackle. At the very least, he adds depth.

“I’m just coming in ready to compete wherever I need to compete at and just ready to go to work, win some games," Tevi said.

Running back Marlon Mack also re-signed with Indianapolis on a one-year deal Tuesday, keeping him in the mix with Jonathan Taylor, Nyheim Hines and Jordan Wilkins. And he's back for some of the same reasons as Hilton.

“It’s a family — guys in the locker room, training room and knowing I’m going to get taken care of here," Mack said Wednesday. “There’s a big what if not knowing what’s out there on other teams. I know the football field, I know the scheme well and know I am going to do my thing once I get on the field and come back.”