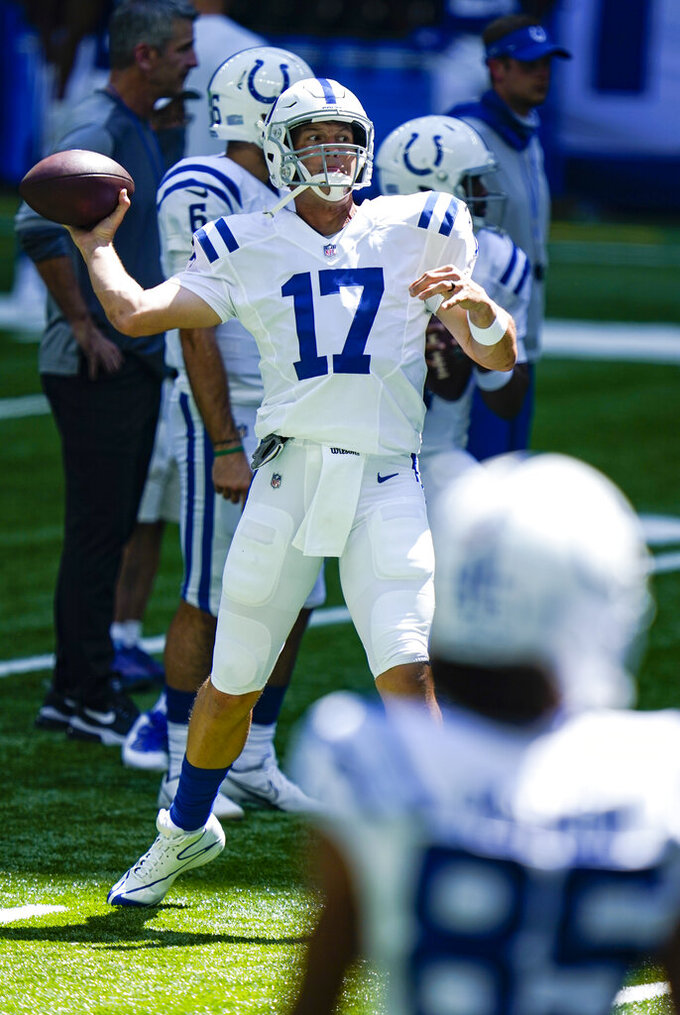 He also understands the need to avoid big mistakes.

So after 16 seasons with the Chargers, Rivers has come to Indianapolis seeking to find that sweet spot. Here, the Colts' new starting quarterback will be protected by one of the league's top offensive lines, will work with a deep group of talented receivers including Pro Bowler T.Y. Hilton and will rely on a strong ground game.

The Colts believe it's a winning combination, one that can help Rivers regain his old form and one that can get Indianapolis back to the playoffs.

“I think there’s a fine line there between aggressive and stupid," he said. “As long as we keep it right there, in the certain window to keep it in, I think we’ll be in good shape.”

The critics contended Rivers was finished after throwing 20 interceptions and posting one of the worst seasons of his career in 2019.

Colts coach Frank Reich saw something else — a gutsy veteran trying to help his team come back late in games.

So Reich convinced the Colts to bet big on Rivers, pinning their title hopes on the arm of a 38-year-old quarterback who starts this season ranked sixth all-time in completions, yards passing and touchdown passes.

It seems to be working out.

Of course the Colts won't know for sure until they visit Jacksonville on Sept. 13.

But after missing the playoffs four of the past five seasons, Rivers finds himself getting adapted to this new, improved offense while testing himself against an upgraded defense that now includes 2018 Pro Bowl defensive tackle DeForest Buckner and 2017 All-Pro cornerback Xavier Rhodes.

And Rivers knows if he does his part with a reduction in turnovers, he could be in line, similar to John Elway in 1997, to earn his first Super Bowl ring late in his career.

“It fires me up. It sounds like the type of group you want to play quarterback with and for," Rivers said. “The biggest thing for me is — be myself but also find that sweet spot between aggressiveness and stupid. Certainly, I've done that throughout my career in different years and don’t see any reason I can’t do that again.”

Running back Marlon Mack produced his first 1,000-yard season last year and has an expiring contract after this season.

So when the Colts took a running back in the second round of the draft, Mack could have complained.

Instead he embraced the opportunity to divvy up carries with Jonathan Taylor, the first Football Bowl Subdivision player to rush for more than 6,000 yards in three seasons. Mack figures the pairing serves two purposes — making the Colts stronger and keeping both player's legs fresh.

“It just motivates you," he said. “I know we can be great together. I’m more of a team guy so we can come together as a team, go out there and just put in work. Everybody has the same goal on this team."

When the Colts needed to find a replacement for tight end Eric Ebron in free agency, Reich encouraged the Colts to add another familiar face — Trey Burton.

Burton played the past two seasons in Chicago after spending his first four in Philadelphia, where Reich was the offensive coordinator. And Burton, best known for throwing a touchdown pass to Nick Foles in the Eagles' Super Bowl 52 victory, could play a key role opposite two-time Pro Bowler Jack Doyle.

“It’s something I feel like suits me really well," Burton said when asked about the Colts' offense.

Indianapolis has kept an undrafted rookie on its initial 53-man roster for a league-high 21 consecutive years.

The COVID-19 pandemic threatens that streak.

Reich acknowledges players fighting for the final roster spots will get fewer snaps in training camp and fewer opportunities to impress coaches after the in-person offseason workouts and preseason games were canceled. To get a better look, Reich compensated by scheduling two scrimmage games at Lucas Oil Stadium though he's also noted it will be tougher for a long-shot player to make the roster.

“Certainly guys that have been around the league a little bit, that degree of experience means a lot," Reich said. “That factors into it, but I still believe that there is time for the ‘unproven guy’ to show we can trust him."