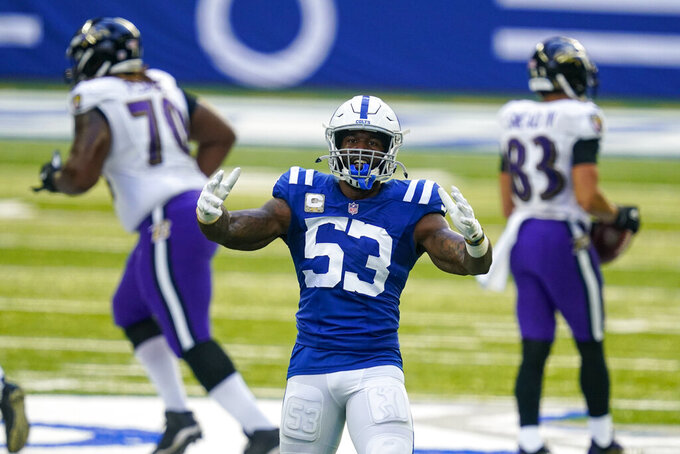 Indianapolis Colts outside linebacker Darius Leonard (53) celebrates a sack against the Baltimore Ravens in the first half of an NFL football game in Indianapolis, Sunday, Nov. 8, 2020. (AP Photo/Darron Cummings)

INDIANAPOLIS (AP) — Indianapolis coach Frank Reich knows what the missing element has been this season: consistency.

He also understands if the Colts don't find a solution, they could miss the playoffs for the fifth time in six years.

But with eight more games on tap, starting Thursday at Tennessee, Reich is betting big on his team. He's challenging the Colts to develop a knockout punch they can use in their pursuit of the AFC South title.

“We need to prove we can win these kind of games, against tough teams. I know we have talent and players to do it," Reich said Monday. “We just have to take that final step of closing these kinds of games out against the kind of teams that you see in the playoffs."

The inability to finish already has proved costly this season for Indy (5-3).

On Sunday, against Baltimore, the Colts led 10-7 at halftime despite completely dominating the first two quarters. It opened the door for the Ravens to stick primarily with the game plan and rally for a 24-10 victory.

It was a similar story in Indy's confounding season-opening loss at Jacksonville.

And while the Colts are clearly in the playoff mix for the second straight season, their resume is lacking. All five wins came against teams that now have poorer records than Indy and two of the losses came against playoff contenders.

Indy's offense has struggled to stretch the field, which has allowed defensive coordinators to gang up against a ground game that has struggled after thriving last season.

There have been recent indications things could be changing. Philip Rivers has taken more deep shots, with mixed results, and the Colts ran for 75 yards on 15 carries in the first half against Baltimore.

Indy's vastly improved defense has provided a steadying presence but couldn't get off the filed in the second halves of all three losses.

The Colts need both to work efficiently over the next three weeks when they face the division-leading Titans twice sandwiched around a date with NFC North leader Green Bay. It's a stretch that could dictate Indy's postseason fate.

Reich believes everything he needs to find the solution is in place. He just needs to see them prove it.

“We know it (Tennessee) is another good football team, a team that knows how to win games. That's what we really need to do," he said. “I believe we have the players and coaches to do that, but time will tell."

Run defense. The presence of Pro Bowl defensive tackle DeForest Buckner has made a pivotal difference. He draws extra blockers, freeing up teammates to make plays, while there is no shortage of Buckner making plays, too.

Running game. Last season, Reich made it clear he wanted to run first and run often behind one of the league's top offensive lines. This year, he's tried to follow the same approach, but it's been far less successful.

DL Tyquan Lewis. The former Ohio State star was one of Indy's four second-round picks in 2018 but struggled to get on the field. Lewis looked like a different player in training camp this summer and has made a big impact on game days this season, too.

T.Y. Hilton. The four-time Pro Bowler sat out Sunday with an injured groin. The bigger problem can be found on the stats sheet. The 30-year-old Hilton has 22 receptions for 251 yards and no touchdowns in his contract season. and just hasn't appeared to be in sync with Rivers.

It's a long list. Running back Marlon Mack and safety Malik Hooker, both starters in contract years, went down with torn Achilles tendons. Receiver Parris Campbell (knee) hasn't played since Week 2 and rookie receiver Michael Pittman Jr. missed three games with a leg injury. Tight ends Jack Doyle, Trey Burton and Mo Alie-Cox have been out at times, too, along with Pro Bowl linebacker Darius Leonard, who missed two games with an injured groin, and left tackle Anthony Castonzo, with a rib injury. Indy also has had two COVID-19 scares.

Indianapolis certainly has shown promise during the first eight games. Now it needs to show they can deliver on that promise over the final eight.