Column: Half a season and a Super Bowl ahead for NFL 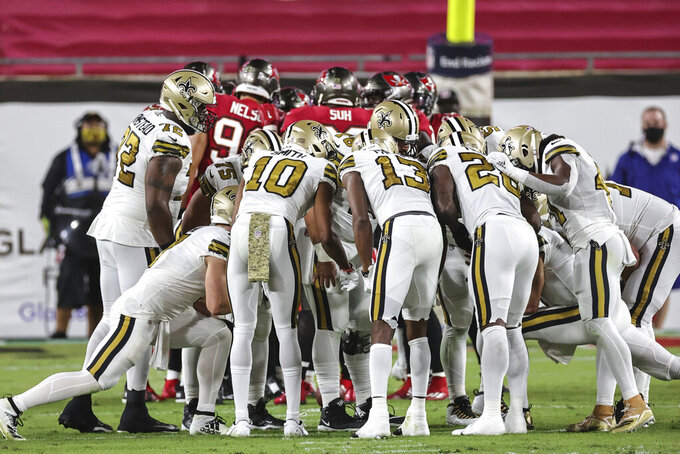 The New Orleans Saints huddle during an NFL game against the Tampa Bay Buccaneers, Sunday, Nov. 8, 2020 in Tampa, Fla. The Saints defeated the Buccaneers 38-3. (Margaret Bowles via AP) 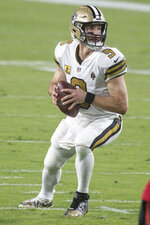 It feels like another time, but it was only a few months ago that the NFL managed to pull off what seemed like a minor miracle. With Roger Goodell leading the cheers from his basement, the league conducted a virtual draft that stocked teams with new players and, more importantly, infected no one.

The actual season was always going to be harder. For that, the NFL needed a real miracle and the buy-in of everyone — including the Las Vegas Raiders — to clear a path to the Super Bowl in February.

Whether the title game will be played Feb. 7 in Tampa Bay still remains in question, halfway through a schedule upended at times by the coronavirus. If anyone needed a reminder the virus was in charge, they got it this week when the unbeaten Pittsburgh Steelers put quarterback Ben Roethlisberger and three others on the COVID-19 list after tight end Vance McDonald tested positive.

Equally as worrisome for the NFL, the number of people testing positive doubled this week in the league's latest results. The new positives included 15 players and 41 other team officials.

One thing is certain: With empty or partially filled stadiums and fake crowd noise filling broadcasts, this isn’t the NFL anyone wants.

That includes the new team in Sin City, where a 5-3 start and a win over the defending Super Bowl champion Chiefs should have fans dancing on the Las Vegas Strip. If the town is excited, the Raiders seem to be the last to know.

``We can’t sense it,’’ Raiders coach Jon Gruden said. ``We have played in front of empty stadiums and we don’t go anywhere. You do look forward to those times, but you really have a strange, I don’t know, experience going right now, that’s for sure.”

It’s strange all around the league, though the NFL has managed to make it through nine weeks of play, thanks to voluminous COVID-19 testing and a growing awareness among players that they don’t want to be the ones messing things up.

The league decided early on to go without a bubble like the ones that helped the NBA and NHL complete their seasons. Just testing, and lots of it, along with an underlying hope that NFL players and coaches recognized the only way there was going to be a season was if everyone behaved properly.

And now here we are, halfway through a season unlike any other. Everyone hasn’t always behaved properly and the games haven't always gone off on schedule.

Through it all, though, the path to the Super Bowl remains open.

“You know what? I feel like a lot of guys are going to be smart, be cautious of the situations they’re in,” Chiefs wide receiver Tyreek Hill said. “And when I say that, if they go to a restaurant, wear a mask. If they go to a park, wear a mask. We’re in a pivotal moment. We need everyone.’’

Still, nothing is normal, from Tom Brady under center in Tampa Bay to the COVID-19 tests that players and team officials begin almost every day with.

Meanwhile, the virus keeps spreading around the country even as some teams allow limited numbers of fans inside stadiums. How it looks may be as different in February as it was when Goodell was in his basement holding the draft in April.

To try and make it to the finish line, the NFL has a contingency plan to extend the season a week and expand the playoffs from 14 to 16 teams if teams don't get in 16 regular-season games.

But the fact the NFL has made it this far borders on remarkable. That it administered more than a half million tests through the first week of November with only 78 players testing positive borders on incredible.

Meanwhile, enough story lines are playing out that have nothing to do with COVID-19 to keep fans interested.

The Steelers are unbeaten through eight games for the first time. The Raiders are winning in their new city. The Jets are awful, and the Giants aren’t much better.

And on Sunday night, Brady and Drew Brees faced off against each other in a matchup of the two greatest quarterbacks in the game. Brady threw three interceptions in a lopsided loss, leaving the debate still open whether he or Bill Belichick was responsible for New England’s success over the years.

Halfway through, February is clearly in sight even as the virus rages. Amazingly, the schedule is still intact and every Sunday is still filled with games.

The NFL just may get there, just like the NBA, NHL and MLB found a way to crown their champions. But there’s no guarantee, especially without a bubble. Things could quickly fall apart and no amount of contingency planning will overcome the worst-case scenario of a playoff team coming down with multiple infections.

For now, though, the NFL plays on.