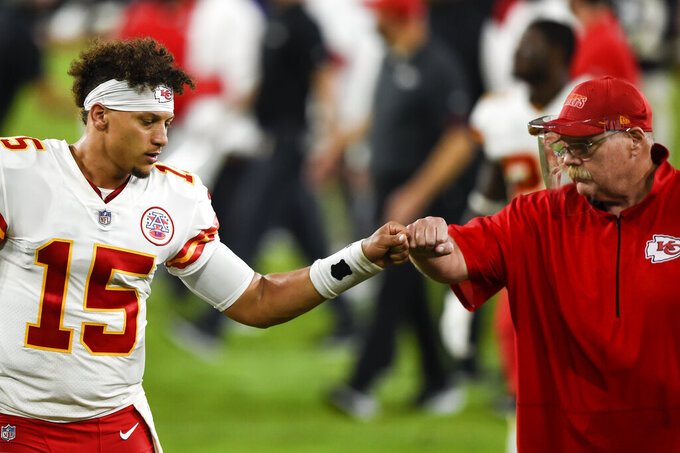 No one really expected the NFL to make it through an entire season unscathed. The insidious nature of the coronavirus dictated that there would eventually be a crisis for a league trying desperately to play without a bubble.

Still, for a few weeks it looked like the NFL’s gamble would pay off. Teams were playing games, players were staying safe, and the biggest issue seemed to be how many fans should be allowed inside stadiums to watch.

Suddenly, that’s all changed. The Tennessee Titans have been decimated by the virus, Cam Newton has added a mask to his fashion accessories and players around the league are warily on the lookout for dangers that can’t be seen.

Now the NFL’s day of reckoning is coming. It’s not a stretch to say the remainder of the season hangs in the balance over the next few weeks.

A league accustomed to dominating any crisis in the past is finding out what those in the White House should already know: You can’t bully COVID-19.

``We’re fighting an uphill battle,’’ Buffalo coach Sean McDermott acknowledged while waiting for word on whether his team will go to Tennessee for a scheduled Sunday game. ``I think we know that there’s a challenge because of how easily this thing spreads.’’

That challenge became evident when several Titans tested positive last week — and the positives kept coming. By Wednesday the total was up to 22, including 11 players, and there seemed to be little chance Tennessee would be hosting the Bills on Sunday as scheduled.

The Patriots also canceled practice in the wake of Newton’s positive test and another for Stephon Gilmore, the reigning NFL Defensive Player of the Year. The Raiders also reported a positive test in Las Vegas.

And around the league Wednesday, the talk was about health, not football. In Kansas City, Patrick Mahomes was asked to explain why he and Gilmore shared a bro hug after the Chiefs beat the Patriots.

“Obviously knowing that I went up to him after the game and gave him a high-five, like I have all my career and not thinking about it — it was a mental lapse,’’ Mahomes said.

Unfortunately, those kinds of lapses have been common in the first weeks of the season. Players have interacted with other teams, gone maskless to an event in Las Vegas, and not always followed the strict protocol put in place in hopes of getting the season in.

And even after being fined $100,000 for not wearing his mask on the sidelines, Raiders coach Jon Gruden kept taking it down again in Sunday’s loss at home to Buffalo.

The NFL is now threatening violators with everything it has left in the punishment bag — including suspensions and the loss of draft picks. But the cases are beginning to add up, and the logistics to keep playing the season are getting tougher.

``Everybody’s confidence level is probably a little less than a few weeks ago. Two weeks ago everybody was riding high,’’ said Miami quarterback Ryan Fitzpatrick. ``It’s amazing to see what happened in Tennessee so quickly.”

Indeed, the Titans were on a roll to begin the season, winning their first three games. But Sunday’s game against the Steelers was rescheduled and so, likely, will be the game with the Bills.

The Patriots, meanwhile, were already facing a short week after having their game with the Chiefs moved to Monday. But is it fair to ask them to play at home Sunday against Denver after having to cancel practice and being without Newton and Gilmore?

It’s not, of course, and too many situations like that will threaten to make a mockery of the season.

Testing numbers released by the NFL are impressive with some 35,000 tests a week for players and other team personnel. But while the number of positives is low, the trend is upward.

``It takes one guy to go to the grocery store and it’s as simple as that sometimes,’’ Bills quarterback Josh Allen said. ``You don’t ever suspect anybody to have it in the facility. But you’ve got to hope that guys are wearing their masks, the contact tracers are working.’’

That’s the hope, and through four weeks of the season it looked like that might be enough. Now, though, the virus is not only in play but crossing the 50-yard-line.

Things could get so bad that there’s a possibility, NFL chief medical officer Allen Sills acknowledged Wednesday, the season could be paused or even suspended.

The NFL will continue to fight on, at least for the moment. The league will play as many games as it can this weekend and hope it can play next.

As always, though, the virus will have the last say.