Column: No need for NASCAR, WWE with short track at Olympics 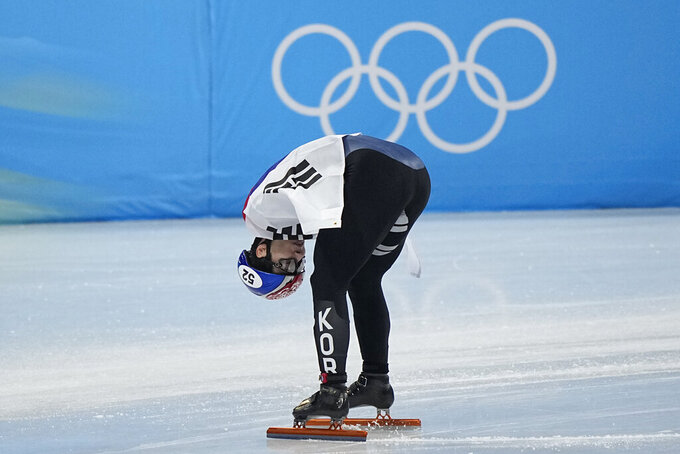 BEIJING (AP) — NASCAR and pro wrestling are not sports at the Winter Olympics.

Instead of stock cars pinballing off one another at Bristol, there are daring skaters whipping around a track set up on a hockey-sized rink at the Capital Indoor Stadium — bumping and drafting, doling out an elbow here, a shoulder there as they scuffle for position in what seem like impossibly tight corners.

The unfortunate ones — and there are LOTS of those — wind up slamming into the thick pads cushioning the outside boards, often after getting a subtle nudge from one of their competitors.

Dale Earnhardt would've fit right in with this bunch.

Then, when the race is over, things really get intriguing.

As best as we can tell, they don’t script the results like WWE, but it usually comes down to the almighty word of the chief referee. At these Games, he's a white-haired man in a jacket, tie and skates, who looks a bit like Burt Bacharach but wields the power of Vince McMahon.

No race is official until the ref makes the call, usually after watching a video replay monitor while the skaters and fans stir nervously. The vagaries of the rulebook generally leave plenty of room for griping and moaning.

“It can definitely be frustrating,” American short tracker Kristen Santos said. “But I think that's something we know going into this sport. We all chose it. Part of what keeps the sport so exciting is the uncertainty. You don't know who's going to win every time."

Short track has been an official part of the Winter Games since 1992. My first real taste of it came a decade later at Salt Lake City, where Aussie Steven Bradbury pulled off one of the great upsets in Olympic history simply by remaining upright.

Bradbury was hopelessly overmatched in the 1,000-meter final and lagged far behind, hoping others would fall or get disqualified so maybe he could sneak away with a bronze. It worked out beyond his wildest dreams when all four skaters ahead of him, including American star Apolo Ohno, went down in a heap.

Bradbury coasted across the line first with a dazed look.

That, in essence, is short track.

“Short track speedskating is a little bit different sort of a sport,” said Britain's Farrell Treacy, who made the men's 1,500 final in Beijing. “But that's why I love the sport. The uncertainty. The fact that you're rubbing shoulders."

The condition of the ice only adds to the unpredictability. The Zambonis pop out between every few races for resurfacing, and the workers are constantly pouring buckets of water and blasting the ice with a fire extinguisher-type device to smooth things out.

But it's impossible to keep the ice pristine for every race, as Treacy discovered.

“I was in a heat with an Italian,” he said. "In the first three laps, he fell over right in front of me, just because the ice broke up. The ice was terrible those first rounds. Loads of people falling over.

Nothing quite so dramatic as Bradbury's victory has happened in Beijing, but there have still been plenty of thrills and spills.

Corrinne Stoddard wound up with a broken nose in her very first Olympic race, losing an edge and careening so hard into the padding that her knees smashed into her face.

“I didn't have a lot of time to react,” said the 20-year-old American. “My main focus was not cut myself or break my leg, so I stuck my feet out. But when I stuck my feet out, my knees came into my face. Basically, I broke my own nose.”

She returned to the ice a few nights later wearing a patch across the bridge of her nose that helped numb the pain.

There was certainly no thought of quitting.

“Heck no!” Stoddard said. “I went to the doctor that night (after her crash) and they were like, ‘You can either stay here or you can go home.’ And I was like, ‘I'm not going home!'"

The team from South Korea, a hotbed for short track, actually thought of heading home after the disqualification of two of its skaters this week. World-record holder Hwang Daeheon was among those penalized.

The federation filed complaints with the International Skating Union and the IOC, even though its protestations had absolutely no chance of changing the outcome.

As with WWE, the referee's decision is often debated but never altered.

Yoon Hong Geun, chef de mission for South Korea, said any thoughts of bailing on Beijing were dismissed “because we have many races left in the remaining days."

"We decide to stay and finish the games,” he said.

Hwang bounced back from his DQ to capture gold in the men's 1,500. After crossing the line first — and making sure everything was all on the up-and-up with the ref — he dropped to his knees and looked toward the ceiling in thanks.

An offshoot of traditional speedskating, which is conducted on a 400-meter oval and puts competitors in their own lanes, racing strictly against the clock, short track is certainly not for everyone.

And don’t even get me started on the relays, which are organized mayhem with four skaters per team, all on the ice at the same time, tagging each other in and out with a shove to the rump.

It's more hectic than the subway at rush hour.

“The rustle and bustle, that whole thing, I love it,” Treacy said, breaking into a big smile. “I watch long track sometimes and I think, ‘Ahh, maybe this is right up my street.’ But then I go, ‘I think I like my sport a little bit better.’”

Hard to disagree with that.

Nothing spices up the Olympics quite like a hint of NASCAR mixed with the WWE.