Column: Punch away, but at least baseball has a plan 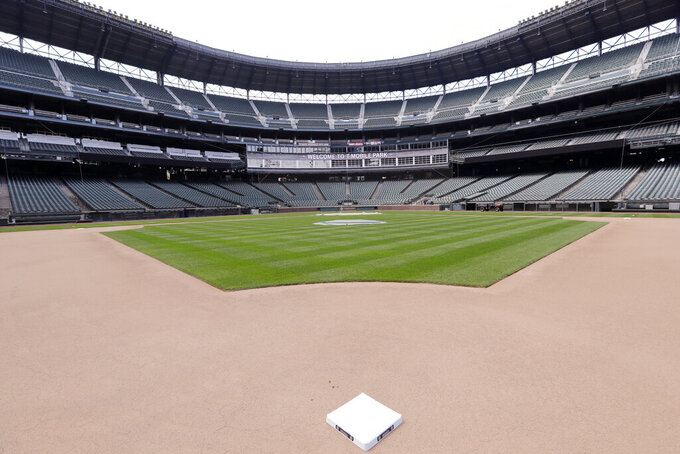 Second base sits in its place in an otherwise empty ballpark where grounds crew members continue to keep the Seattle Mariners' field in playing shape as the ballpark goes into its seventh week without baseball played because of the coronavirus outbreak Monday, May 11, 2020, in Seattle. A person familiar with the decision tells The Associated Press that Major League Baseball owners have given the go-ahead to making a proposal to the players' union that could lead to the coronavirus-delayed season starting around the Fourth of July weekend in ballparks without fans. (AP Photo/Elaine Thompson)

Everybody has a plan, Mike Tyson liked to say, until they get hit in the face.

A plan to open an abbreviated season over the Fourth of July weekend isn’t exactly set in stone, and whether it actually happens is far from guaranteed. Still, just setting a starting date has to make fans everywhere excited about the prospects of baseball taking its traditional place alongside fireworks and hot dogs on America’s birthday.

The plan is not complete, and it’s not perfect. There are so many moving parts that it could all fall apart and leave fans with nothing but late-night Korean baseball on the holiday weekend.

But if there was ever a time to wave the flag and cheer the possible return for the boys of summer this summer, it’s now.

An 82-game season that would have seemed awfully weird just a few months ago looks just fine now. So do expanded playoffs, with 14 teams making it into the postseason.

And even hardened traditionalists will be fine with the DH in the National League, as long as the coronavirus subsides and pitchers are hitting for themselves in 2021.

Most everyone, it seems, wants to see baseball return. Now we’ll see how much the players want it.

MLB officials are expected to present their reopening agenda to the players’ union on Tuesday, and they may not be welcomed with open arms. Teams want players to agree to have salaries tied to a 50-50 split of revenues from the shortened season, a proposal that may be a non-starter among players who agreed in March to a contract modification that pays them a prorated portion of their salaries depending on how many games are played.

With no fans in the stands, the haircuts could be deep. That, and the fact it would be a de facto salary cap, could make it a tough sell to players used to big salaries, even at a time millions of Americans have no income at all.

But it’s not just economics. There’s not much upside for players to make millions of dollars if they end up dying from contracting the virus in a clubhouse or on a team bus.

And, as Washington Nationals pitcher Sean Doolittle noted on Twitter, details on player safety are notably absent — at least in the details of the plan released so far.

“Bear with me but it feels like we’ve zoomed past the most important aspect of any MLB restart plan: health protections for players, families, staff, stadium workers and the workforce it would require to resume a season,’’ Doolittle said.

Those, of course, are not only the most crucial details to be resolved — and also the most difficult. That was evident over the weekend when UFC resumed without fans in Florida, only to have a fighter and two cornermen test positive for the coronavirus on the eve of the event.

It figures to be a lot harder to test teams with over 50 players on rotating rosters, along with all the personnel it takes to put on a Major League Baseball game than it did to test a few fighters and referees for UFC. Testing could be problematical, as could the reality that any plan advanced by baseball will have to be approved by local authorities in various states and municipalities.

That includes the state of California, which houses five MLB teams and has been stricter than many states in efforts to tame the spread of the virus.

“We’ll see where we will be in July,’’ California Gov. Gavin Newsom said.

Indeed, the plan could fall apart even before July, even if players eventually agree to terms and local authorities sign off on play. Health officials have warned against the virus roaring back as social distancing restrictions are relaxed, and a second wave of infections would be a knockout punch that might be impossible to block.

Still, the fact there is a plan is cause for optimism in a world where optimism is in short supply. Baseball has a target date to return and a season it wants to play, not in Arizona as originally speculated but in MLB stadiums across the country.

America’s favorite pastime returning on America’s holiday. There’s a lot to like about that.

___ Tim Dahlberg is a national sports columnist for The Associated Press. Write to him at tdahlberg@ap.org or http://twitter.com/timdahlberg