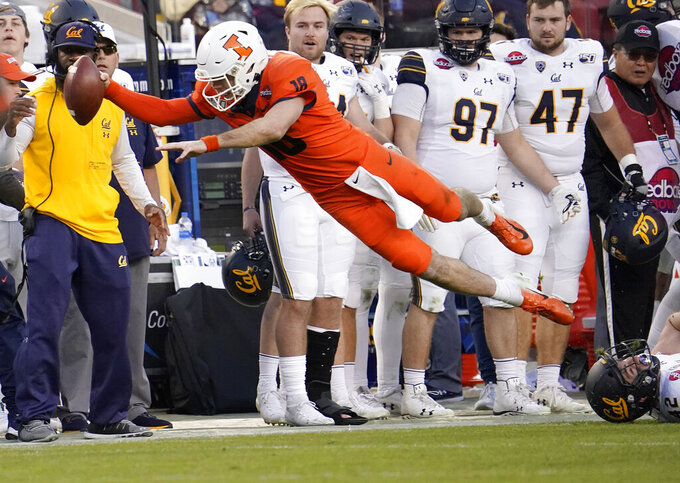 FILE - In this Monday, Dec. 30, 2019, file photo, Illinois quarterback Brandon Peters (18) dives for a first down against California during the second half of the Redbox Bowl NCAA college football game, in Santa Clara, Calif. Peters was short of the first down. Illinois appears poised to make a statement in the Big Ten during the 2020 season. One reason is quarterback Peters, who started after transferring from Michigan. He is Illinois' first returning No. 1 quarterback since 2016. (AP Photo/Tony Avelar, File)

CHAMPAIGN, Ill. (AP) — Illinois appears poised to make a statement in the Big Ten. And coach Lovie Smith sees no reason why his team can't.

Coming off their first bowl game in five years, the Illini boast an experienced lineup and a big addition on offense.

“We made progress last year and we are building on that this year,” Smith said. “This is the best football team we’ve had since I’ve been here. I really like where we are right now.”

Smith comes into his fifth season at Illinois with a 15-34 record. But the Illini were more competitive last season, finishing 6-7 overall (4-5 Big Ten) after losing to California in the Redbox Bowl.

One reason is quarterback Brandon Peters, who started after transferring from Michigan. He is Illinois' first returning No. 1 QB since 2016.

Peters, who missed two games last season with concussions, completed 55.3% of his passes for 1,884 yards. He threw for 18 touchdowns and was intercepted eight times.

“It’s been pretty comfortable this year, having that experience last year,” Peters said. “There’s always moving parts, but overall things are the same for the most part. All of us being on the same page is a huge plus.”

He has an experienced group of receivers, with Josh Imatorbhebhe, Danny Navarro and Daniel Barker combining for 78 receptions in 2019. Newly activated tight end Luke Ford, a Georgia transfer, is expected to play a major role in the passing game as well.

The Illini are scheduled to open the season with a Friday night game at Wisconsin on Oct. 23.

Illinois is counting on junior Mike Epstein to stay healthy and help carry the load at running back. He had season-ending injuries each of his three years, including one to the knee in the 2019 opener against Akron.

Last year’s leading rushers — Reggie Corbin and Dre Brown — are gone. And Re’Von Bonner has chosen to sit out the current season because of concerns over COVID-19. Backing up Epstein will be Western Michigan transfer Chase Brown.

Linebacker Jake Hansen is back to lead the defense. He was tops in the nation with seven forced fumbles despite missing four games due to injury as a junior last season. Linebacker Milo Eifler added 10 tackles for loss in his first season at Illinois after transferring from Washington.

The Illini also have three starters back in their secondary, including cornerbacks Nate Hobbs and Marquez Beason — who missed last season with a torn ACL.

Tight end Luke Ford is drawing quite a bit of attention in Champaign this year. And it's not just because of his 6-foot-6 frame.

A top recruit out of Carterville High School in southern Illinois, he's back playing in his home state after transferring from Georgia. Ford appeared in just nine games and caught one pass for the Bulldogs as a freshman in 2018. But the Illini hope he can deliver in a big way for them.

“I have high expectations because I know what I’m capable of and I know what I can do,” Ford said. "And I know that even though I sat out a year, I’ll still be able to come in and hopefully be able to make an impact.”

Illinois has not released any information about the number of COVID-19 cases within the football program.

“We have a protocol we feel real good about,” Smith said. “We don’t have any issues. All our guys were practicing for the most part. Our guys have been in compliance with what we have asked them to do.”

Besides the opener at Wisconsin, the Illini also have tough home games against Minnesota (Nov. 7) and Ohio State (Nov. 28). Illinois was originally scheduled to open with a nonconference home game against Illinois State on Sept. 4. Then, the Illini were supposed to start with a Thursday night home game against Ohio State on Sept. 3. That changed again when the season was postponed in August.