Congo officials confirm 2nd death from Ebola in the east 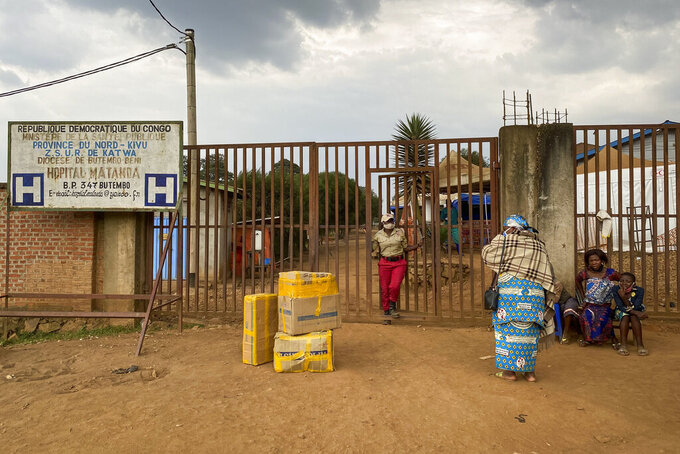 The gates of the Matanda Hospital in Butembo, where the first case of Ebola died, in the North Kivu province of Congo Thursday, Feb. 11, 2021. A second case and death of Ebola has been recorded in Congo's North Kivu province after a 60-year-old woman died Wednesday, according to officials. (AP Photo/Al-hadji Kudra Maliro)

BENI, Congo (AP) — A second case and death of Ebola has been recorded in Congo’s North Kivu province, according to officials.

The victim was a 60-year-old woman who died Wednesday in the health zone of Biena, according to provincial health minister Nzanzu Syalita. He said she had been to the same health post as the first victim.

The health ministry said it has deployed authorities to the Biena and Katwa health zones to trace more than 100 contacts.

Health officials had confirmed a case of Ebola on Sunday in another woman who was from the village of Biena and died in Butembo.

The governor’s delegate in the Biena health zone, Longs Mabanga Julio, said that the two cases have created panic and frustration among the inhabitants.

Syalita, the provincial health minister, said the second victim’s body was handled by members of the community before burial, increasing worries of spread in the region. Ebola is spread through bodily fluids, and corpses are particularly infectious.

While the source of original contamination is still unknown, the first woman who died was the wife of an Ebola survivor, the government said Sunday.

The World Health Organization has said it isn't unusual for sporadic cases to follow a major outbreak.

The announcement had come less than three months after Congo’s 11th outbreak in the western Equateur province officially ended in November.

A 2018 outbreak in Eastern Congo was the second deadliest in the world, killing 2,299 people before it ended in June. That outbreak lasted for nearly two years and was fought amid unprecedented challenges, including entrenched conflict between armed groups, the world’s largest measles epidemic, and the spread of COVID-19.