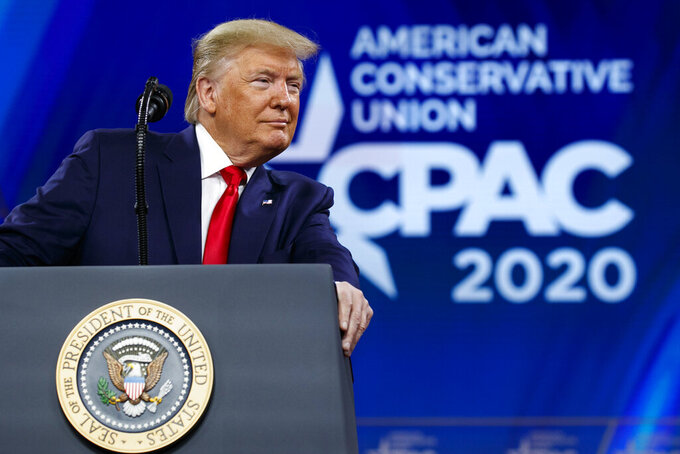 WASHINGTON (AP) — A gathering of conservatives this weekend in Florida will serve as an unabashed endorsement of former President Donald Trump's desire to remain the leader of the Republican Party — and as a forum to fan his false claim that he lost the November election only because of widespread voter fraud.

Matt Schlapp, chairman of the Conservative Political Action Conference and a Trump ally, said discussion panels on election integrity would highlight “huge” evidence of illegal voting in Georgia, Nevada and elsewhere that ultimately swung the election for Democrat Joe Biden.

Such baseless claims fueled the Jan. 6 attack on the U.S. Capitol and have been repeatedly dismissed by the courts, the Trump administration's leading security officials and senior Republicans in Congress, including Senate Minority Leader Mitch McConnell of Kentucky.

The conference marks the first significant gathering of Republicans since the election and its aftermath as the party reckons with the faction that continues to support Trump as its leader and those who think the GOP needs to move quickly beyond the turbulent era of his presidency. Conference organizers, representing the first camp, did not invite any of the 17 Republican members of Congress who voted to support Trump’s second impeachment or any major Trump critics.

McConnell, a regular at the annual conference, will not be on the program after publicly chastising Trump for inciting last month’s deadly insurrection at the Capitol. McConnell and his allies are worried that Trump will undermine the party’s political future should the former president and his conspiracy theories continue to dominate Republican politics.

But at the conference, which will feature Trump along with most of the GOP's leading 2024 presidential prospects, organizers say election fraud will be a major theme.

“Because we pretty much wiped away scrutiny in a lot of these important swing states, you had a lot more illegal voting. That is not an opinion, that is fact," Schlapp told The Associated Press before the conference's kickoff Thursday evening.

But in five dozen court cases around the country after the election, no such evidence was presented, and Trump's then-attorney general, William Barr, said the Justice Department also had found none.

At the conference, though, those fact-based assessments are likely to be few, if any.

Trump himself is headlining the three-day session in a Sunday speech that will be his first public appearance since leaving the White House on Jan. 20. The event is being held in central Florida, having been blocked from meeting at its usual Maryland hotel by coronavirus restrictions in that state.

Trump has been keeping a relatively low profile since he moved from the White House to Palm Beach a month ago. He is expected to use his speech to assert his standing as the head of the party, as well as to harshly criticize Biden's first month in office, including the new president's efforts to undo Trump's immigration policies.

“I think the broader point will be: Here's where the Republican Party and conservative movement and the America First movement goes from here," said senior Trump adviser Jason Miller. “In many ways, this will be a throwback to 2016, where the president ran against Washington. Here we’ll see the president address the fact that the only divide in the Republican Party is between the elites and the conservative grassroots in the party."

Trump has begun to wade back into the public, calling into friendly news outlets after the death of conservative commentator Rush Limbaugh and after golfer Tiger Woods' serious car accident. His aides have been meeting this week to set benchmarks for fundraising and organization for candidates seeking his endorsement as he tries to plot a future that will include backing those who will challenge lawmakers who voted for his impeachment and whom he deems insufficiently loyal.

“They need to show that they’re going to be serious candidates before asking the president to get out there for them,” Miller said.

Arkansas Sen. Tom Cotton, among several scheduled speakers who are contemplating a 2024 presidential run, declined to describe Trump as the outright leader of the GOP.

“In opposition, when you don’t have the White House, there are many more voices that lead the party,” Cotton said in an interview.

The event will feature a seven-part series on “Protecting Elections,” including one titled “Why Judges & Media Refused to Look at the Evidence,” featuring Rep. Mo Brooks, R-Ala. The conservative congressman addressed the rally near the White House just before the Jan. 6 Capitol attack, telling the crowd, “Today is the day American patriots start taking down names and kicking ass."

Others who attended “Stop the Steal” rallies and participated in efforts to overturn the results will also be featured alongside panelists bemoaning China's power, “Cancel Culture,” and “California Socialism."

Trump has a long history with CPAC, which played a key role in his emergence as a force in conservative politics. He attended the conference every year he served as president.

While he is mulling running again four years from now, the event will feature speakers thought to be considering their own runs in 2024, including former Secretary of State Mike Pompeo, Sens. Ted Cruz of Texas and Josh Hawley of Missouri, and Gov. Ron DeSantis of Florida and Kristi Noem of South Dakota.

In the interview, Cotton refused to say there was widespread election fraud in the 2020 election. In an implicit nod to those who do, he encouraged efforts by Republican officials in various states to strengthen election security. Voting rights groups fear that such efforts will make it more difficult for many people, especially nonwhite voters, to cast ballots.

“I don’t want election procedures that were adopted in the middle of a pandemic to become the normal practice," Cotton told the AP. “Especially when those procedures are -- just as a factual matter -- more susceptible to potential fraud.”

Among those who will not be in attendance this weekend: Former Vice President Mike Pence, who has maintained a low profile since leaving the White House and refusing to go along with Trump's efforts to overturn the election.

Schlapp noted that controversial Trump loyalist Rep. Marjorie Taylor Greene, R-Ga., was not invited to address the conference, although she was welcome to attend.

“You really can't include everybody,” he said.