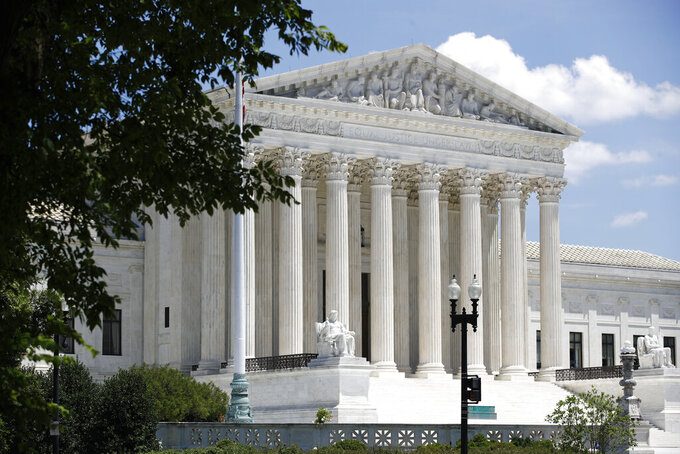 In this June 29, 2020 file photo, the Supreme Court is seen on Capitol Hill in Washington. (AP Photo/Patrick Semansky)

WASHINGTON (AP) — Abortion. Guns. Religion. A Trump-fortified conservative majority is making its presence felt at the Supreme Court by quickly wading into high-profile social issues that have been a goal of the right for decades.

For years, frustrated conservatives, including some justices, chided a court with a majority of Republican appointees for not going far enough or passing on issues they thought demanded the court's attention.

Now, with three appointees of former President Donald Trump on the nine-member court, longer-serving conservative Justices Samuel Alito and Clarence Thomas can cobble together five-justice majorities even without the vote of Chief Justice John Roberts.

The Trump-appointed justices represent “not only a shift of ideology but a shift of power. There are five justices to right of Roberts,” said Boston College law professor Kent Greenfield. “What that means is that the chief is not in control of the court anymore.”

In the seven months since Justice Amy Coney Barrett joined the court, conservative majorities have issued a series of orders in favor of religious worshippers who had challenged restrictions imposed because of COVID-19.

Barrett provided the fifth vote in several cases. Roberts has been unwilling to second guess elected officials in these cases and, prior to her death in September, Ginsburg also had voted to keep the restrictions on religious services in place.

Perhaps even more significant are the culture war issues that the court will, in all likelihood, rule on in the spring of 2022, in the run up to the congressional midterm elections. The justices announced Monday that they will hear an abortion case that could undermine nearly 50 years of abortion rights rulings and agreed last month to decide whether Americans have a constitutional right to carry guns in public for self-defense.

Waiting in the wings is a direct challenge to affirmative action in college admissions, in a case, involving Harvard, that calls on the court to reverse a 2003 ruling upholding race as a permissible factor in admissions. A vote to hear that case next term could come before the court takes its long summer break.

A decision to hear a case takes just four votes and is no guarantee of its outcome. But on guns and abortion in particular, the court with a less-conservative lineup passed up several opportunities to wade in.

Thomas, the longest-serving current justice, has long complained about his colleagues' timidity on these topics. For nearly 30 years, he has called on the court to overturn the landmark Roe v. Wade decision that extended abortion rights across the country. He was one of four justices who would have overturned Roe in 1992, in his first term on the court.

On guns, Thomas has lamented that his colleagues treat the Second Amendment “right to keep and bear arms” as a second-class right, a phrase that Barrett herself used when she was an appeals court judge.

The court's shift to the right grows out of two untimely deaths and one crucial retirement.

It began five years ago, when Justice Antonin Scalia died suddenly and Senate Republicans refused to act on President Barack Obama's nomination of Merrick Garland to take Scalia's seat. Had Garland, now the attorney general, been confirmed, it would have given the court a majority appointed by Democratic presidents for the first time in 50 years.

Instead, the seat remained empty, Trump shocked the world by winning the presidency and Justice Neil Gorsuch joined the court in April 2017.

Kennedy's retirement essentially put Roberts at the ideological, though right-leaning, center of the court, and the chief justice has resisted public perceptions of the court as merely a political institution. He has voted with the liberal justices to uphold the Obama era health care law and strike down a Louisiana abortion regulation.

But Ginsburg's death, which led to Barrett's confirmation days before the 2020 election, ended a brief period in which Roberts controlled how far the court would go in either direction.

Trump had pledged to nominate “pro-life justices” and predicted back in 2016 that with three appointments, “Roe would be gone.”

Carrie Severino, whose Judicial Crisis Network spent tens of millions of dollars in support of confirming the three Trump appointees, said the justices have not shied away from big issues.

“Having Trump’s nominees on the court has made a real impact. It’s exciting to see a solid majority of the court committed to interpreting the Constitution as it’s written,” said Severino, a onetime law clerk for Thomas.

Liberal groups are alarmed at the turn of events generally and the court's intervention in the abortion case in particular.

Take Back the Court, a group pushing for Supreme Court expansion, said in a letter it is sending to President Joe Biden that the recent developments are a predictable result of Republican efforts to keep Scalia's seat open, then fill Ginsburg's quickly.

“None of this is a surprise: The Supreme Court was stolen by Mitch McConnell — and its theft designed by the Federalist Society — explicitly to overturn Roe and restrict women’s rights,” the letter reads.

Biden's commission on Supreme Court reform is holding its first meeting Wednesday. It's supposed to report back in six months.

Ginsburg herself recognized what might come to pass with Trump's election. In an interview with The Associated Press in July 2016, she was confident that Democratic nominee Hillary Clinton would become president and have several Supreme Court appointments.

But what, Ginsburg was asked, would happen if Trump were to win?

“I don’t want to think about that possibility, but if it should be, then everything is up for grabs,” she said.