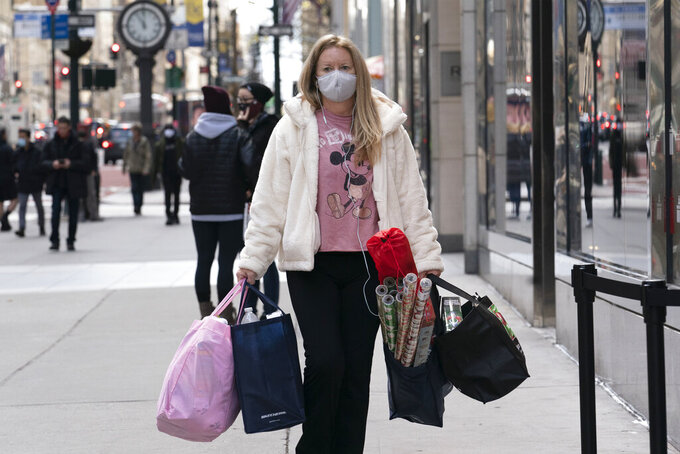 FILE - A woman carries shopping bags, Thursday, Dec. 10, 2020, in New York. U.S. consumer spending fell 0.4% in November, the first decline since April, as Americans confronted a newly resurgent virus. The Commerce Department reported Wednesday, Dec. 23, that the November decline followed a 0.3% gain in October and even bigger increases starting in May as the country emerged from a pandemic lockdown that had been imposed to try to stop the spread of the virus. (AP Photo/Mark Lennihan)

The decline followed a 0.3% gain in October and even bigger increases starting in May, the Commerce Department reported Wednesday, a period when the country was emerging from lockdowns intended to halt the spread of COVID-19. There was a massive 12.7% decline because of that in April.

Inflation as measured by a gauge preferred by the Federal Reserve showed a modest 1.1% gain in November, well below the Fed's 2% target. The benign inflation readings will give the Fed leeway to continue providing support to an economy that has absorbed millions of people who suddenly unemployed as businesses shut down or lay off workers.

Economists, however, fear that weak spending by Americans will slow economic growth in coming months. Congress passed a $900 billion pandemic rescue package Monday, but President Donald Trump attacked the measure the following day as insufficient with direct payments to Americans.

Consumer spending accounts for around 70% of economic activity so even small declines can weigh heavily on economic growth.

It is unknown if Trump will sign the measure, which as been fought over for months, as his presidency expires.

Without more government help, the economy could be crippled, and economists say the pullback on spending by Americans last month could be a harbinger of worse days to come as a resurgent coronavirus leads to more shutdowns.

The government reported Tuesday that the overall economy, as measured by the gross domestic product, grew at a record 33.4% annual rate from July through September, rebounding from a record fall in the second quarter.

But the concern is that growth could slow significantly in the current quarter and some analysts belief without further congressional support, GDP could dip back into negative territory in the first quarter of 2021.

The 1.1% fall in personal incomes reflected the fact that government transfer payments continued to fall sharply in November as more unemployed Americans exhausted their unemployment benefits.