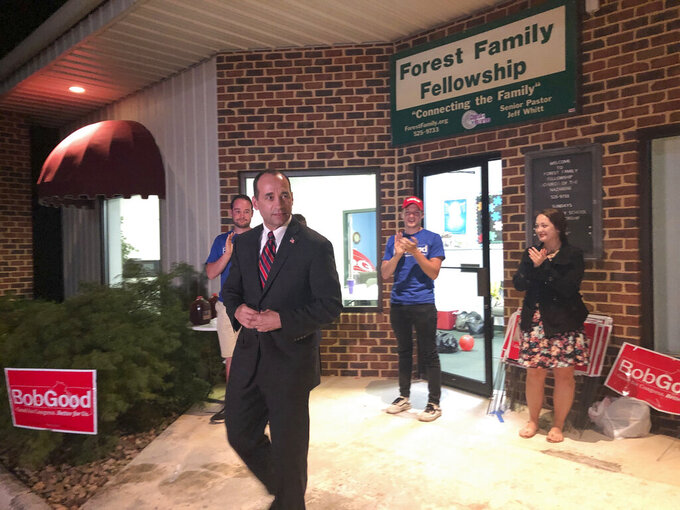 RICHMOND, Va. (AP) — Political newcomer Cameron Webb says he didn't plan it this way, but his campaign was made for these unprecedented times.

With the country gripped by a pandemic and racial unrest, Webb is a Black doctor and lawyer from Charlottesville who is the director of health policy and equity at the University of Virginia.

“I feel like the moment is one that my campaign is literally built for," Webb said in an interview with The Associated Press Wednesday, a day after he handily won the Democratic primary in Virginia's 5th Congressional District.

Of course he didn't know that the coronavirus would upend daily life — and have a disproportionate impact on people of color — or that George Floyd's death would spark national protests for racial justice when Webb launched his campaign last year. The 37-year-old father of two said he entered politics because he wants to fix the country's broken health system.

But his strong showing across the district, and in precincts with large percentage of African American voters in particular, suggest the energy behind the sweeping civil rights protests across America is also present at the polls. Webb won two-thirds of the vote against three strong, accomplished candidates, all of whom are white.

“There are some people who have written off black political power in this district. I think they just didn't understand how much there is, and I think that's going to be a key ingredient for November," Webb said.

Webb's victory Tuesday comes as two Black progressive candidates — Kentucky's Charles Booker and New York's Jamaal Bowman — may be on the verge of knocking off establishment-backed congressional candidates. The AP has not yet called either race.

It also comes when Black politicians have never had more influence in state politics. African American lawmakers hold key leadership positions at the General Assembly and there's a chance that all three statewide Democratic candidates for governor, attorney general and lieutenant general are members of the Virginia Legislative Black Caucus.

Virginia's 5th Congressional District is larger in size than New Jersey and stretches from northern Virginia to the North Carolina border and includes Charlottesville — home to a violent white nationalist rally in 2017 that shocked the nation. Webb works at the University of Virginia's medical school, which is in Charlottesville.

“The situation that we find ourselves in unwillingly here in this country has certainly moved people of all walks of life, all races, that we have a problem,” he said. “And it's a serious problem and we need serious people with serious minds and serious answers to address these things.”

The 5th District has never elected a Black candidate and no Democrat has won the seat in more than a decade. President Donald Trump won the district easily in 2016.

But Democrats are bullish on the district after the sitting incumbent — U.S. Rep. Denver Riggleman — lost a GOP convention earlier this month after he angered social conservatives by officiating a gay marriage. Riggleman's departure and Webb's unexpectedly strong showing now make the district more competitive, said Kyle Kondik, who analyzes elections for the University of Virginia Center for Politics.

Riggleman was defeated by Bob Good, a social conservative and immigration hardliner who used to work at Liberty University. Good failed to file paperwork on time and may have a difficulty ensuring his name appears on the ballot. The issue is set to be determined by the state Board of Elections next month.

Webb is more of policy wonk than fire-breather who said he's a “pragmatic progressive” looking forward to having a “contest of ideas” with Good.

Webb added that he knows first-hand how to win over Trump supporters. Webb worked in a White House fellowship program both for former President Barack Obama's administration and the start of the Trump administration.

Webb said he was frozen out by the Trump administration initially, with his desk was even put out in a hallway. But he said he eventually built relationships and found ways to do real work. And he said one Trump staffer even sent him a congratulatory text Wednesday morning.

“If I was able to work in the Trump White House for six months while being my authentic self and disagreeing on policy matters from A to Z and still build real relationships, I think I can win voters in the 5th," he said.