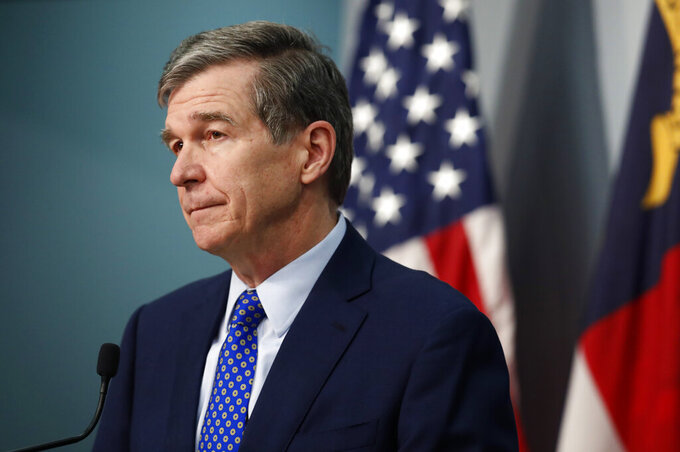 RALEIGH, N.C. (AP) — North Carolina civil rights groups struck a deal on Thursday with Gov. Roy Cooper's administration to allow for the early release of 3,500 inmates in state custody over the next six months.

If the state abides by its commitment to trim about one-eighth of its more than 28,000-person prison population, the North Carolina branch of the National Association for the Advancement of Colored People would dismiss its lawsuit alleging prison conditions during the coronavirus pandemic have violated inmates' rights under the state constitution.

A Wake County Superior Court judge granted a stay on Thursday that will allow the parties to go forward with the terms of the settlement they had negotiated.

Since the start of the pandemic, at least 47 inmates have died of COVID-19, while more than 9,500 have been infected, according to state Department of Public Safety data. Nearly one-fourth of the 39,000 offenders tested since March 2020 received at least one positive diagnosis.

“What’s happening in North Carolina prisons is the convergence of two pandemics both fueled by racism and classism – COVID 19 and an unjust criminal legal system,” said a statement from Anthony Spearman, president of the NC NAACP. “Even as we celebrate this monumental step in our efforts through this lawsuit, we must acknowledge that a disproportionate number of those marginalized, oppressed, and put in harm’s way by being incarcerated during the pandemic are melanin-rich, working poor, or both.”

State prison officials vowed to “continue to prioritize the health and safety” of staff and inmates.

“As indicated in the agreement, the department will move forward with the actions outlined over the next 180 days, most of which it is already carrying out daily,” said Timothy Moose, the Department of Public Safety's chief deputy secretary for the Division of Adult Correction and Juvenile Justice.

The American Civil Liberties Union of North Carolina, Disability Rights North Carolina and other advocacy groups joined the NAACP's complaint filed in Wake County in April 2020. At the time of the complaint, more than 34,000 people were incarcerated. The state has since reported a 16% reduction in the number of incarcerated individuals.

Under the terms of the proposed deal, the Department of Public Safety would have 90 days to release at least 1,500 offenders, and an additional 90 days to release the remaining 2,000. Those who have been given an early release since Feb. 15 would count toward the 3,500 total.

North Carolina isn't the first state to have announced plans to release inmates. New Jersey Gov. Phil Murphy signed a bill last fall allowing more than 2,000 people to be released from state prisons in November, according to the Prison Policy Initiative, a nonpartisan group tracking inmate releases. A California appeals court ordered last October half of the 2,900 inmates at San Quentin State Prison to be released or transferred.

The ACLU of North Carolina called Thursday's settlement a “momentous achievement” but urged Cooper and prison officials to return as many inmates as possible to their families.