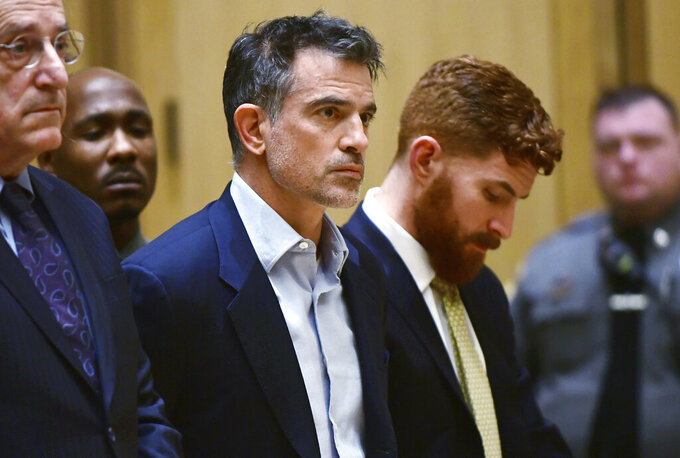 FILE - In this Jan. 8, 2020 file photo, Fotis Dulos, center, the estranged husband of missing mother of five, Jennifer Dulos, is arraigned on murder and kidnapping charges in Stamford Superior Court in Stamford, Conn. Dulos was charged with killing his estranged wife who had gone missing months earlier amid contentious divorce and child custody proceedings. Despite extensive searches, the remains of Jennifer Dulos have never been found. (Erik Trautmann/Hearst Connecticut Media via AP, Pool) 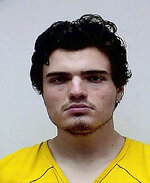 HARTFORD, Conn. (AP) — The story of the coronavirus in Connecticut began in early March with the state's first reported infection — a New York woman who worked at Danbury and Norwalk hospitals and tested positive.

In the months since, the virus has killed over 5,700 people statewide and shaken the economy, costing thousands of jobs and leaving many people in financially precarious situations.

As elsewhere, the virus was by far the biggest story of the year in Connecticut. Here is a look at some of the other events that made news in the state.

After a six-day search across several states, University of Connecticut senior Peter Manfredonia was arrested at a Maryland truck stop in June. He was charged in a string of crimes that included the machete killing of a 62-year-old man in Willington and a 23-year-old man in Derby who had been a friend of Manfredonia's in high school. He has pleaded not guilty to charges including murder, attempted murder, home invasion and other charges and is awaiting trial.

Isaias packed more of a punch than many were expecting when it hit Connecticut on Aug. 4, knocking out power to more than 700,000 customers statewide. As outages lingered, lawmakers pressed Eversource to explain why the power grid was not better prepared following recommendations made in 2012 after Superstorm Sandy and after an October nor’easter left comparable numbers of customers without power for extended periods.

For student athletes, Connecticut's policy has been to allow transgender girls to compete as girls in high school sports. In a response to a complaint that transgender female runners had an unfair physical advantage, the U.S. Education Department in May determined that Connecticut's policy violates the civil rights of female athletes who are not transgender. In September, the department went further and threatened to withhold some federal funding from Connecticut school districts if they followed the state policy.

Democrats kept their lock on Connecticut's congressional delegation as all five U.S. House members won reelection in November. The state, which has not sent a Republican to Congress in over a decade, also sided with Joe Biden in the presidential race, helping him to defeat President Donald Trump.

Two workers at the Veterans Affairs hospital in West Haven were killed Nov. 13 by a blast of hot water vapor as they were working on the steam system in a maintenance building. The accident killed a VA maintenance worker, Euel Sims, 60, a Navy veteran from Milford; and a private contractor, Joseph O’Donnell, 36, of Danbury.

In September, the chief of Bridgeport police resigned after he was arrested on federal charges that he had rigged the hiring process to ensure he would get the job. Investigators said Chief Armando “A.J.” Perez received examination materials in advance and had the scoring criteria rigged in his favor with help from the city's personnel director, David Dunn, who also was charged. Perez and Dunn each pleaded guilty and were facing up to two years in prison.

In the days before the pandemic struck, one of the hotter political debates in Connecticut centered on highway tolls. It came to a screeching halt in February when Gov. Ned Lamont, a Democrat, announced he was dropping his plan to impose tolls on trucks.

In January, police charged Fotis Dulos with killing his estranged wife, New Canaan's Jennifer Dulos, who had gone missing months earlier amid contentious divorce and child custody proceedings. Later that month, Fotis Dulos died following a suicide attempt. The remains of Jennifer Dulos have not been found, despite extensive searches.

The idea began in jest in a feud after comedian John Oliver went on a rant against the city of Danbury on HBO’s “Last Week Tonight with John Oliver” in August. Danbury Mayor Mark Boughton said the city would rename a sewage plant in Oliver's honor because, like Oliver, it was “full of crap.” But the city went through with it after Oliver pledged to donate $55,000 to local charities if it did.