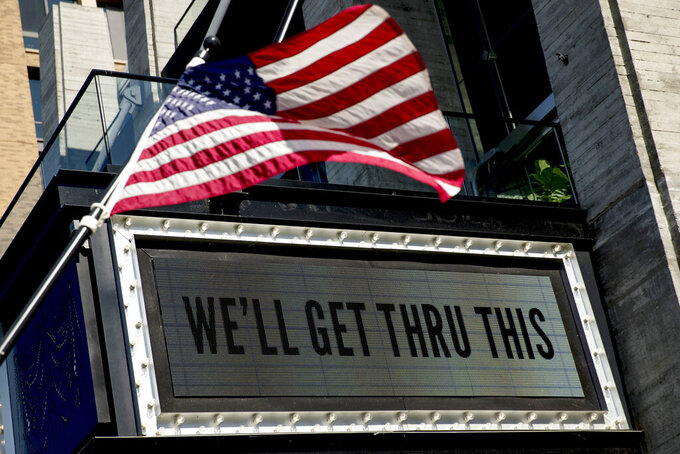 In this April 6, 2020 photo, a sign at The Anthem music venue reads "We'll Get Thru This" at the wharf which is almost completely empty because of the coronavirus outbreak in Washington. The coronavirus pandemic has gut-punched global markets, put 6.6 million Americans out of work and raised the strong likelihood of a recession. But in the Washington lobbying world, business is booming. (AP Photo/Andrew Harnik)

WASHINGTON (AP) — The coronavirus pandemic has gut-punched global markets, put 6.6 million Americans out of work and raised the likelihood of a recession. But in the Washington lobbying world, business is booming.

Companies, interest groups and entire industries are seeking help from lobbyists as they navigate a chaotic environment to secure a piece of the record $2.2 trillion financial aid package the Trump administration must quickly pump out in an effort to stabilize the U.S. economy.

An Associated Press analysis of federal lobbying filings shows the number of companies and organizations hiring lobbyists shot up dramatically across the months of February, March and early April. Of the more than 700 registrations filed since the beginning of the year, at least 70 specifically mention the new virus, COVID-19 or a global health crisis. Dozens of other lobbyists and firms who were previously retained list the virus or the stimulus legislation in recent quarterly lobbying reports.

And there has also been a stark increase in medical groups, drug makers and others connected to the medical industry who have hired lobbyists, even if the virus was not specifically given as a reason in the disclosures.

The surge in lobbying provided another potent example of the power and sway Washington’s permanent influence industry can hold during times of crisis.

Federal disclosures show medical supply manufacturers hired lobbyists to promote products. Other companies have hired lobbyists as they seek to use the pandemic to justify regulatory changes or understand how the outbreak affects their bottom lines.

Then there’s the union representing the U.S Park Police, a federal law enforcement agency. It hired a lobbyist to communicate with other federal officials after officers struggled to get their agency bosses to recognize the danger posed by keeping open national parks in dense urban areas.

Gary Gallant, the lobbyist they retained, said Park Police officers were concerned their well-being and the health of park visitors were "being placed in unnecessary risk, and social distancing was nearly impossible to enforce.” He said the union wanted to be connected with elected officials in Washington who might be able to get the National Park Service to get the parks closed.

Lee Weingart, the founder of the firm the LNE Group, said he was hired to help drum up business for a New York-based manufacturer On the Right Track Systems Inc., which makes quick-change hospital curtains.

“Our goal really is to find those pockets of money made available by Congress,” Weingart said.

Even manufacturing conglomerate 3M — the company that has been the subject of scorn from President Donald Trump as it tries to meet the relentless demand for face masks — stated in a filing that it wants the government to address regulations and laws “related to manufacturing of respirators and liability protection during health emergencies.”

An advocacy group called the Coalition for a Prosperous America registered to lobby on matters ranging from the “re-shoring of vital medical and healthcare supplies, products, and devices” to “removing barriers for copper to be deployed as (an) antimicrobial.”

And Vyaire Medical Inc., an Illinois-based maker of critically needed ventilators, hired a firm as it seeks to draw attention to its “complete portfolio of breathing solutions.”

The pandemic also has generated lobbying jobs that might seem obscure to anyone but the client.

Laundrylux, a New York company that sells commercial laundry equipment, employed Ballard Partners, the lobbying firm run by a top fundraiser for Trump, to get laundromats added to a federal advisory list of essential businesses that should stay open.

There are about 30,000 laundromats in the U.S., and many of them operate on tight budgets. If forced to close during the pandemic, they might not survive financially and Laundrylux may lose current and potential customers, said lobbyist Dan McFaul, a Ballard executive who was a member of Trump’s presidential transition team. Brian Ballard, whom Trump picked to be vice chairman of his inaugural committee, also is registered to lobby for Laundrylux.

The problem for Laundrylux: Not all states have been precise or consistent about the categories of businesses permitted to stay open. Federal guidance that recognized laundromats — and that many state and local officials rely on when making closure decisions — would clear up any confusion.

Independent business owners in Washington, D.C., formed a limited liability company called DC 2021 amid concerns the stimulus package won’t do enough to help them, then hired the Carmen Group to lobby on “business issues,” according to a registration report filed with the D.C. government.

Geoffrey Griffis, a D.C. real estate developer who spearheaded DC 2021, said the loan he may qualify for through the economic relief package is dwarfed by the millions of dollars in potential losses he’s facing over the next year.

“The federal stimulus isn’t going to do much for us,” Griffis said.

Other lobbyists have even been retained for the primary purpose of explaining provisions of the relief legislation.

Companies that supply temporary and contract employees asked more than 1,000 questions about the $2.2 trillion coronavirus bailout during a 90-minute online meeting held last week by the American Staffing Association.

“And none of those questions were anything but ‘Can you tell me what this section of the bill means?’” said Jack Kingston, a former Republican congressman from Georgia who registered last month to lobby for the association.

Kingston, who joined the law firm Squire Patton Boggs in 2015 after 22 years in Congress, said the association, whose 1,400 members include Kelly Services and Manpower, “hired us defensively.”

One issue that arose during the webinar stemmed from a prohibition in the legislation against outsourcing, Kingston said. Businesses with 500 to 10,000 employees that receive loans have to certify that for the term of the loan and two years after repayment they won’t outsource workers. Staffing companies are adamant the ban not be construed to apply to a company's use of temporary help.

“We just want to make sure that they’re heard by Congress. ... as we rush through rules and legislation to try and address the crisis,” Kingston said.