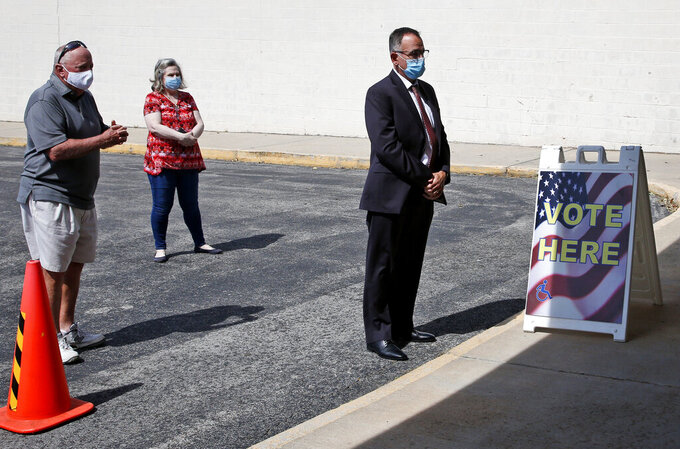 OKLAHOMA CITY (AP) — The president of the state medical association on Thursday called for Oklahoma to require that face masks be worn at businesses and in public places, as the state health department reported 438 new coronavirus cases and three additional deaths.

The Oklahoma State Department of Health said at least 11,948 residents have been infected and 375 of them have died due to COVID-19, the disease caused by the virus.

The actual number of people who have been infected is likely higher because many people have not been tested, and studies suggest people can carry the virus and not feel sick.

Dr, George Monks, president of the Oklahoma State Medical Association, said in a statement Thursday that the situation has got much worse since Gov. Kevin Stitt allowed businesses to reopen and other activities to resume in late April.

“On behalf of Oklahoma’s physicians, I urge Gov. Stitt and the Oklahoma State Department of Health to enhance their call of robust safety guidelines for Oklahoma businesses and public spaces that require employees and customers to wear masks around others,” Monks said.

“The public has the information on how to impede the spread of this deadly virus: wear a mask in public; wash hands or use sanitizer often, and conduct social distancing, but too many people are still taking an ‘it’s not my problem’ approach to the virus,” Monks said. “Oklahomans must decide if we’re going to move forward in the safest way possible or are we going to declare that the lives of those who have died from this disease are just not as important as our vanity.”

Stitt said Thursday the idea of reinstating some business closures is “absolutely not” part of discussions he’s having.

“If you close down, you still are going to have these ebbs and flows and it could last for the next two years," he said. “We have to learn how to deal with this and keep ourselves safe.”

The University of Oklahoma announced that all faculty, staff, students and visitors are required to wear masks on campus starting Thursday. The university has held classes online since the spring and will resume in-person classes in the fall.

Hundreds of people lined up Thursday morning outside Norman's Sooner Mall and waited for more than two hours for a drive-through COVID-19 test offered by the Oklahoma State Department of Health.

Department spokesperson Louis Marschik said 94 of the city's 909 firefighters are under quarantine because of the virus, including 10 who have tested positive.

On Tuesday, Mayor David Holt described a “tsunami of cases” among people aged 18 and 49 and the city is considering rolling back reopening measures.